Gravity Sketch, an early-design software solution for sketching out concepts and collaborating in virtual reality (VR), has grown since I tried it at the SIGGRAPH conference last year. With the release of version 1.6 in April, the eponymous company launched Gravity Sketch Surface. This Wacom tablet–specific version was designed to complement the existing VR version, enabling designers to move back and forth between 2D and 3D creation environments.

“It’s been taking off,” Dae Ho Lee, head of operations at Gravity Sketch, told Cadalyst. For certain tasks, such as tracing over reference images, "2D space could be a slightly more familiar medium to some designers than the immersive space," he explained. Gravity Sketch users can transition among desktop, mobile, and VR platforms to suit the task at hand and hardware availability.

And last month, Gravity Sketch launched the first portable version of its VR sketching and collaboration tool. In this case, “portable” refers to the fact that Gravity Sketch 1.7 can be used with Facebook’s Oculus Quest — a standalone, wireless set of VR hardware — to create designs anywhere, whether or not a computer is close by. “Quest is the first of its kind, it’s completely untethered,” Lee said. 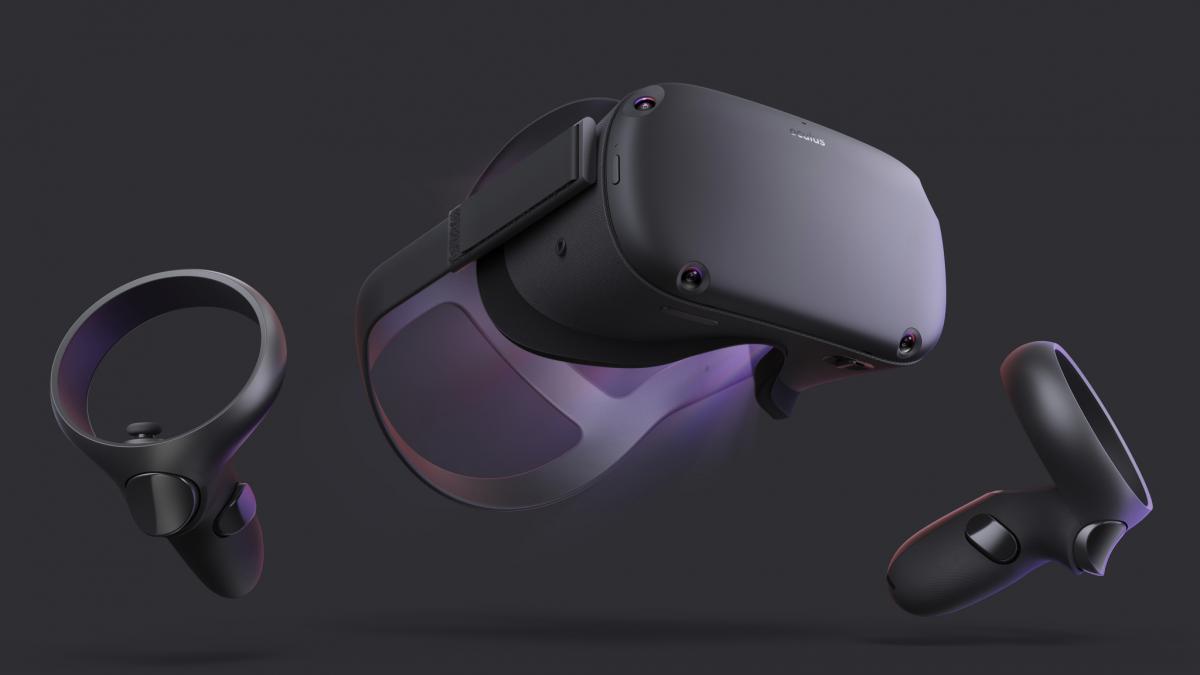 Oculus Quest virtual reality hardware is not tethered to a computer, so users don’t get tangled up in cords, or brought up short as they move. Image source: Oculus.

Lee explained that if users install the software onto Quest, they can even work without access to Wi-Fi. CEO and cofounder Oluwaseyi Sosanya explained that users can quickly sync the Quest (or other VR system) with design files stored in the cloud — “kind of like using an external thumb drive.”

According to Lee, one of the big barriers to VR adoption, especially in enterprises, is the cost of hardware: In addition to often-spendy VR headsets and controllers, users need powerful computers with graphics cards burly enough to handle VR applications. Oculus Quest, in contrast, starts at $399 for one headset and two handheld controllers — and doesn’t need to be paired with a computer. “It’s a price point that’s half that of a smartphone these days,” Lee observed.

Gravity Sketch reports that it is seeing more interest from enterprise-level customers thanks to the Oculus Quest launch. Some “buy half a dozen [Quests] just to play with it,” Sosanya noted. “It’s a no-brainer in terms of the price point.”

Current customers include Ford, which is using Gravity Sketch across all its design studios and has reportedly reduced concept development time for a vehicle interior and exterior from four months to 20 hours as a result. “It’s something they’re really looking to invest in the coming years,” said Lee.

And with Co-creation, a multiuser feature developed by Gravity Sketch in collaboration with Ford, designers can collaborate on the same 3D sketch in real time from any location. In a time when enterprise teams are “getting more and more distributed, across cities and countries … you can get designers into the same room with engineering, management, advance marketing,” Lee said. “You’re really able to pool the creativity of different cultures.” The system supports as many as 10 concurrent users at the moment, and the Gravity Sketch team is working on increasing that number.

Although Gravity Sketch is still categorized as “early access” software, Sosanya believes it is complete now — if used in the right way. “Friction [arises] when people are trying to push it to replace CAD,” he explained. The purpose of Gravity Sketch has never been to supplant CAD, but rather “to translate the ideas in your head to CAD.” For that purpose, “it’s a great, complete product” that supports creation of “a better end product, more in line with what the designer intended.”

By the same token, Gravity Sketch — even with the multiuser collaboration functionality it now offers — is not suitable for photorealistic design review. “By no means are we trying to compete with the visual fidelity of [NVIDIA] Holodeck,” Sosanya stressed. “That’s not where the strength of our product is.” Helping architectural teams transition from their early Photoshop sketches, and engage in quick design discourse early in the process, is where Gravity Sketch shines, he explained.

Next Steps for Sketch

The success of automotive has earned Gravity Sketch interest from diverse consumer products firms, said Sosanya, as they have similar design pipelines built around engineering constraints, human factors, and a strong emphasis on aesthetics, or the “pure art” factor. Footwear companies, many still very dependent on physical models and eager to digitize their entire workflows, are especially prime candidates for adoption.

According to Sosanya, the next beachhead is industrial design, where Gravity Sketch may help shape your next power drill or hair dryer. But Sosanya is interested in more than getting the technology into new markets; he wants to discover new ways of using Gravity Sketch, as users frustrated with established processes look for alternatives. “It’s more about people informing us about what a new design workflow looks like,” he said.