And the Winner is... Bentley Announces the Bridge Category Winner of its 2021 Going Digital Awards in Infrastructure Program 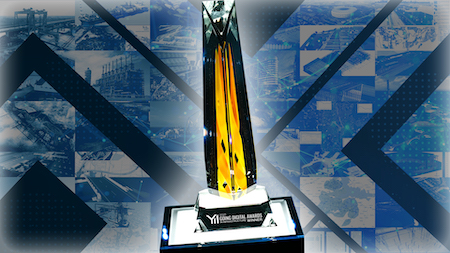 Dustin Parkman, Bentley’s vice president for mobility, introduced the project at the event, acknowledging NYSDOT for its innovative use of digital tools on the project. “When it comes to bridges, [NYSDOT] knows a thing or two about managing a complex project,” he said.

Hidden Complexities
To the average person, the 138th Street bridge over the Major Deegan Expressway may not seem overly complex. With a single 80-foot span and three lanes of vehicular traffic in each direction, it is dwarfed by many other bridges in New York. But complexities and challenges abound under and around the bridge.

“[It] may seem like an uncomplicated bridge at first glance; however, there are many traffic, utility, geotechnical, and structural design challenges that needed to be overcome to ensure the success of this project,” said Brenda Crudele, director of structures design for NYSDOT. “Building information modeling and model-based contracting allowed [us] to design and successfully bid the project with information models as the legal contract document.” 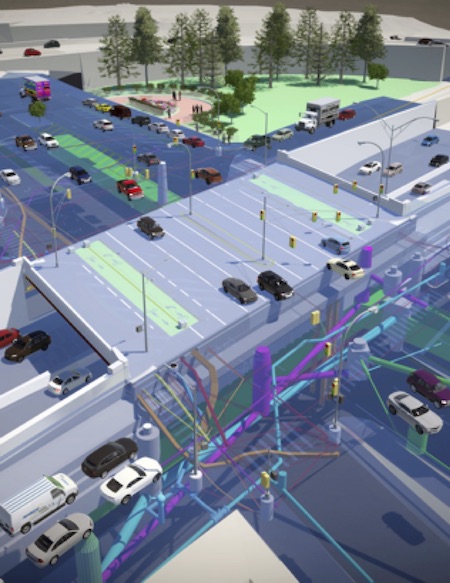 A bird’s-eye view of the 138th Street bridge reconstruction shows the proposed bridge and a complex web of subsurface utilities. Image source: NYSDOT.

One of the early challenges the team encountered was a 15’ wide by 10’ high sewer that could not be disturbed. The combined storm and sanitary sewer generally runs parallel with 138th Street below the bridge and the Major Deegan Expressway. The sewer owner also plans to widen the sewer in the future, meaning the bridge structure had to span a 58’ opening. Relying heavily on digital modeling to locate and visualize the sewer, the team designed a carry-beam assembly that spans the opening, with a drilled shaft on either side of the sewer supporting the concrete-encased carry beam system. 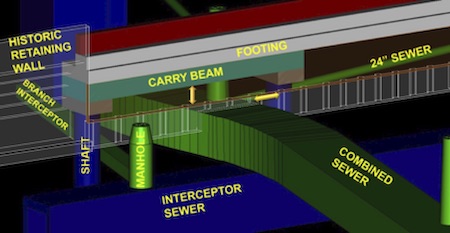 A carrier beam assembly was used in the abutment to bridge over the combined sewer. Image source: NYSDOT.

A 12” water line provided another challenge. In this case, the utility owner wanted the line placed in the outer bay of the bridge for maintenance access, but NYSDOT determined this was not feasible due to sign structure supports within the bay. Again, turning to the 3D model, NYSDOT showed the utility owner how the line could be located in the third bay of the bridge and still be accessible, as a buffer strip between the sidewalk and bike path is directly above the third bay. Modeling also helped the team address other potential utility conflicts and tie the project into the adjacent surroundings, which included extensive bicycle and pedestrian facilities, as well as historic retaining walls adjacent to the bridge.

“There’s every utility imaginable within the project limits,” said Zachary Maybury, NYSDOT’s design squad manager on the project. “Due to the project’s complex nature across so many fronts, we decided to use model-based contracting as our means to deliver this project.”

The model-based approach meant more than just visualizing the project during design, but also sharing that information with contractors. “We developed the 3D model to a level of detail that contractually enables the contractor to build directly from the model without needing a complete set of 2D plans,” added Maybury.

With the project located in the heart of the Bronx, just a mile south of Yankee Stadium, traffic management and staging were critical to the success of the project. Modeling information enabled the team to visualize the project in various construction stages and help convey information to project stakeholders.

“We knew in an urban environment, we exposed ourselves to challenges, but digital delivery helped us address this,” said Maybury. “We had to have everything lined up perfectly. Closing down the road for even a day would result in disruption to the public.”

Working with consultant Greenman-Pedersen, Inc. (GPI), the NYSDOT team used Bentley’s SYNCHRO to build a 4D simulation, importing the 3D model and construction schedule to create a video that depicted the staged construction. “This allowed stakeholders to understand the staging in a matter of minutes,” said Maybury, noting that with traditional paper-based information, the process would have required many hours to review hundreds of plan sheets. The video, along with renderings produced in LumenRT, also proved valuable in public outreach, enabling interested parties to better understand the project construction. 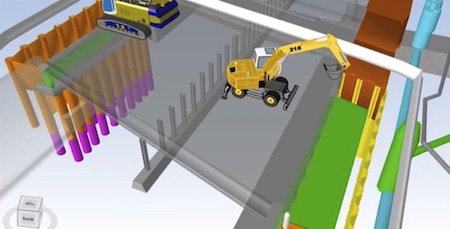 To minimize traffic impacts, the team elected to use accelerated bridge construction (ABC) techniques. Modular deck beams consisting of two steel girders and a precast concrete deck were specified in the contract. The beams are to be fabricated offsite and shipped to the site for installation, reducing on-site construction time. 3D modeling information has helped the contractor visualize the process and has also aided fabricators in producing the modular beams, according to Crudele. Aided by ABC, the project is slated to be built in four independent stages over three years, starting in late 2021.

Digital tools also aided the design review process. With over 180 reviewers from 15 agencies, reviews needed to be streamlined to meet an aggressive schedule. The team used Bentley’s iTwin Design Review, a web-based service that enables users to review designs without any additional software. If reviewers found issues during their review, they could assign issue flags. “This was especially useful to assign issues to the correct party with a due date,” said Maybury. “This enabled us to resolve issues in a timely manner and keep the project’s schedule on track.”

The schedule itself brought additional challenges. With design starting in March 2020, the team was faced with COVID-19 restrictions almost from the start, and the majority of the design work was done remotely. The ability to share 3D information electronically helped the team meet its March 2021 deadline, according to Maybury.

NYSDOT staff handled the majority of the bridge and roadway design in-house by using Bentley’s OpenRoads Designer, OpenBridge Modeler, and ProStructures. GPI provided support with staging analysis, work-zone traffic control, and utility coordination. Maybury said the information sharing process was “pretty seamless,” as GPI had extensive experience working with NYSDOT. “We were able to grow the model-based delivery process organically in-house at NYSDOT. This enabled us to have the framework already in place when we added a consultant to the team for this project,” he said.

Bidding documents included 3D model files in MicroStation format, along with alignment and profile information in XML format. The award was based on a best-value combination of price, technical approach, and team experience. Contractor Ecco III Enterprises won the project, with a price of $47.4 million, 15% below NYSDOT’s engineer’s estimate.

Maybury said he anticipates NYSDOT will use the model-based procurement on future projects. He is also sharing his experiences with other states considering similar approaches. “Senior-level management at NYSDOT is strongly committed to the future of digital delivery and model-based contracting. This provides design teams the confidence to keep pushing the bounds on each of the model-based contracting projects they deliver,” he said. “This doesn’t get developed unless we and other states keep pushing this forward.”

Two other projects were nominated for Bentley’s bridge award. The Nanyanjiang Intercity Railway project, located in Changshu, Jiangsu, China, is the first high-speed railway project in China to adopt a large-scale, 40m simply-supported box girder. China Communication Construction Company (CCCC) Third Harbor Engineering Corporation, Ltd. is leading construction of the 33.9km line, which includes five large bridges and one station. The railway forms the backbone of a busy, intercity line connecting Shanghai and Nanjing. With the new line adjacent to an existing rail line, the multidiscipline design team used drone-based surveys and BIM tools to accurately model existing and proposed conditions, navigating tight conditions and numerous safety issues. The project is under construction and is expected to take approximately four years, with a value of approximately 2.55 billion yuan.

The Lathams Road Bridge in Carrum Downs, Victoria, Australia is a new two-span continuous bridge that is part of an urban brownfield road upgrade project providing connectivity to the Carrum Industrial Estate. The project includes expanding a two-lane road to four lanes, upgrading an existing bridge, and constructing a duplicate bridge. Engineering consultant Hatch used an integrated BIM solution to streamline workflows between the bridge and civil design teams. To evaluate constructability, the team developed an augmented reality model using ContextCapture, providing real-world visualization in the field. Aided by the team’s open connected data environment and fully digital project context, they delivered final design documents four weeks ahead of schedule. The project is expected to be completed by mid-2023.

Congratulations to all the Winners!