Building Back Better—Technology is the Answer, Part 1

It’s time to turn to BIM and digital twin technology to solve real world problems and build for the future.


Recently, Cadalyst attended the EFCG’s 2021 Technology Leadership Conference session led by Steve Cockerell, industry marketing director of transportation, and Katherine Flesh, senior director of transportation sales, at Bentley Systems. We arrived in the virtual conference expecting to hear about digital twins, but it was much more than that. “Using the Power of Digital Twins to Reimagine the Future of Infrastructure” was really a rallying call for designers, engineers, architects, and industry leaders to fully embrace technology to help us solve real-world problems.

Listening to the news, we may be overwhelmed by the current global crises, such as global warming, water safety, population growth, pollution, and more. Plus, with COVID-19, we have had a huge shift from office work, to working at home. (See our article, What Will AEC Offices Look Like Post-COVID-19?, for more on COVID-19 and how work may change from how we know it.)

The US Senate recently passed the $100-trillion American Jobs Plan, and the bill is now with the House of Representatives. According to the August 12, 2021, New York Times article, the US government hopes to invest $312 billion in the US infrastructure, including roads, bridges, and other transportation projects and $55 billion into waterways.

Katherine further explained that the 2021 American Society of Civil Engineers report card on US infrastructure found that across the US, our roads, bridges, and railways are seriously in decline, giving them an average of a “C–” grade. The report card shows that more than 43% of US roads received a poor or mediocre condition grade. Katherine stated, “We've been underfunding our roadway maintenance for years and years now, which has resulted in a backlog of over $786-billion of road and bridge capital needs. That backlog [includes a cost of] $435 billion in repairing existing roads alone. As rehabilitation needs to accumulate and grow, motorists are forced to spend nearly $130 billion every year in extra vehicle repairs and operating cost alone. Every commuter pays over $1,000 every year in wasted time and fuel due to road congestion and failure to act costs each household in the US $3,300.”

Bentley believes that this is a unique opportunity for the industry to leverage digital twin technology to enable the US to rebuild the best transportation infrastructure in the world. Digital twins are just what they sound like, digital equivalents of an existing process, system, or asset. Using digital twin technology, users can plan for needed maintenance, upgrades, or replacements, and run what-if scenarios for events that have the potential to affect asset performance—such as example storm damage, flooding, or increased demand—via a holistic view of the infrastructure asset.

Steve introduced the topic, quoting a report from McKinsey and stated that we have to find a safe, sustainable way of overcoming the challenges faced every day by infrastructure professionals around the world. Steve shared that in the report, McKinsey “looks at how we can reimagine the future of construction to emerge stronger from Coronavirus. [The report says] now is the time to start re-imagining our industry and how organizations can emerge in the next normal from a position of strength. In the short term, they advocate increased digitization, remote working, and a greater reliance on BIM, advancing it to include 4D and 5D simulation to re-plan and re-optimize project schedules. McKinsey also talks about digital twin solutions that can provide current and ongoing feedback and insight into the decision process. Longer term, they see a case for digital tools already proven to increase productivity, becoming even stronger. Increased automation across both design and construction, including the use of offsite construction, where working in more easily controlled environment not only makes it much easier and safer for people to work, but also drives up the quality of assets we're delivering. Finally, they talk of acceleration towards a more sustainable approach, including within governmental efforts to stimulate the economy.”

How can the US take advantage of digital twins and solve these big problems? Let’s look at a couple of successful examples where digitalization and technology is used to solve these sorts of problems. And, let’s shatter those assumptions that are keeping you from going digital.

The UK’s Highways England, a government-owned company, is charged with operating, maintaining, and improving England’s motorways. During the EFCG presentation, Steve discussed that the company has set out its four-year approach to achieve their key objectives, including providing safer, smoother, and more reliable journeys for their customers. The company is already leveraging digital twins to improve the design and to test the strength of their strategic road network for the benefit of the road users and the road operators, using maps to navigate its “smart motorway digital twin” to access critical asset management information, enabling better decision-making across the organization.

An example of digital twins’ success in solving real world problems in the UK is with High Speed 2 (HS2). The new high-speed rail network will run through London, Manchester, and Leeds and is expected to be the backbone of Britain’s transport network. One of the projects main goals is to move the UK towards net zero carbon-use by 2050. HS2 hopes to do this by changing how the UK travels. It will carry over 300,000 passengers every day, free up space for other commuters on other trains and roads, plus allow for more shipments to be delivered by low-carbon train instead of by truck. 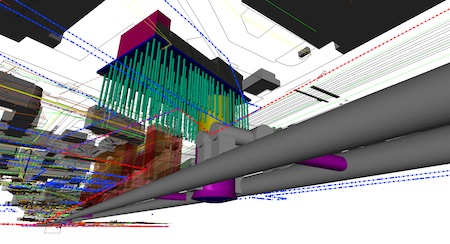 How are digital twins helping? The project as a whole is designed using digital technology with a plan to utilize BIM to increase productivity, reduce waste, and leave a legacy. HS2 has stated that it is, “committed to harnessing the power of BIM to build and operate a high-speed railway, where assets are designed, constructed and maintained digitally using both graphical and non-graphical information in a Common Data Environment providing real-time access to reliable and accurate data.”

Skanska, Costain, STRABAG Joint Venture (SCS JV) was contracted to perform civil works on 26.4 kilometers of the line that will run north to south between London and Birmingham. 95% of the line that SCS JV is developing is underground, making this section quite challenging. The company uses Bentley technology, including iModels and a digital twin approach, to shorten design review time and improve the sustainability of design and construction. In regards to carbon, SCS JV is using what it calls a 5D+ BIM to measure CO2 emissions and use the insight gained to explore and make changes to optimize design and construction.

In the presentation, Steve used a video produced with SCS JV. In it, the company stated that it started its going digital journey many years ago, and that from the outset of the project, they knew that they needed to set a new standard for the delivery of a major project like HS2. Peter Ruff, BIM director at SCS JV, highlighted their commitment to BIM and going digital, saying, “To deliver a job of such magnitude, you had to make changes, that using traditional methods, you wouldn’t be able to complete the job. And during the tender stage, we often used the term that we wanted to create a digital blueprint for infrastructure projects for the future.” 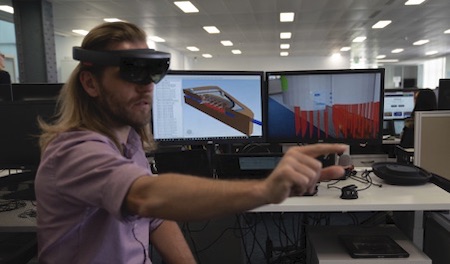 On our side of the pond, Katherine highlighted a project in Cedar Falls, Iowa, and the work of engineering firm Foth. The city of Cedar Falls wanted to reimagine a six-lane highway into urban corridor with a complete streets philosophy. Blaine Buenger, senior technology manager at Foth, explained that, “The proposed reconstruction consisted of six roundabouts and two signalized intersections. We created recreational trails, bike lanes bump-outs for bus stops, and really focused on improved safety for both pedestrians and vehicles throughout the corridor.” 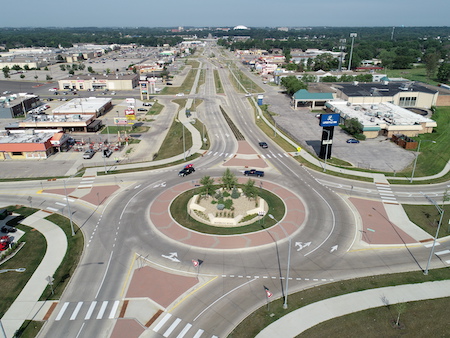 The revitalization of University Avenue in Cedar Falls, Iowa saw Bentley’s open applications and digital twins used to transform the ageing six-lane highway into an urban corridor. The project improved traffic flow and safety and provided a ‘living street’ compatible with existing networks, while minimizing capital investment and operational costs, saving the community an estimated USD 32 million over the next 25 years. Image source: Foth.

While Foth has been dedicated to moving to digital for a long time, this was the company’s first project where they were fully able to achieve this. Blaine continued, “By using Bentley applications on this project, we were able to cut our design schedule in half. Additionally, we were able to save 1,600 hours of design time resulting in over USD 200,000 of savings to Foth.”

The proof is in the pudding as the saying goes. Molly Long, lead civil engineer at Foth, explained, “There was an 18% reduction in crashes and an 89% reduction in injury crashes, which is just amazing, not only because of the safety of the citizens of Cedar Falls, but also because of the cost of those crashes, just to the general public. And I think our project costs as a total are about USD 38 million for all the phases of the project. And, I think, we calculated a USD 32 million return on investment to the community.” 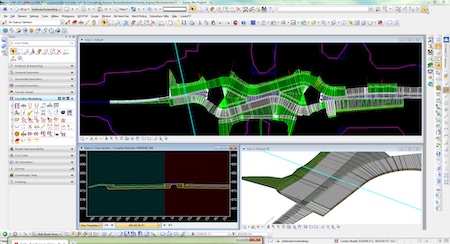 Using Bentley’s open applications on the Cedar Rapids urban corridor made it easy for all users to coordinate modeling, reduce conflicts, and expedite design time by an estimated 50%, saving USD 500,000 in construction costs. Image source: Foth.

Explaining this project in clear terms, Katherine recapped, “Bentley's open applications enabled [Foth’s] team to coordinate modeling, reduce conflicts, and expedite design by an estimated 50%, saving them over a half a million dollars in construction costs. The BIM model also optimized data accessibility and helped increase the efficiency of Foth's interactions with members of the public and other stakeholders, which were significant in relation to the proposed roundabouts, and proved essential to winning the hearts and minds of the public there.”

Building Back Better—Technology is the Answer, Part 2

In part two of this article, find out how Bentley Systems envisions the US taking on the next phase of fixing our infrastructure. How will digital twins will play a part? And, how does the President’s Infrastructure Plan come into play? Read part two here.

About the Author: Lara Sheridan