Graebert Sees Strong Future for CAD beyond the Desktop

The developer behind ARES is determined to explore the cloud and mobile potential of CAD.


Despite common use of notebooks, tablets, and smartphones in the workplace, CAD is still considered by many to be a desktop-only tool. “It is a ‘winter is coming’ strategy” for CAD vendors, says Cédric Desbordes, marketing executive for Graebert GmbH. CAD vendors want more customers, but they keep insisting CAD is an experts-only, desktop solution, limiting growth by not appealing to a larger market.

Graebert sees itself as the valiant knight coming to the rescue in this situation. The company sells a three-part portfolio of DWG-based CAD software for desktop, mobile, and cloud. It also develops CAD software for other vendors, and it offers extended features to simplify enterprise deployment.

“We must help companies realize good alternatives exist to extend access to drawings throughout the organization, available not only for viewing but for editing and reuse,” says Wilfried Graebert, company CEO and founder. “Drafting is a utility like word processing,” he adds. “There are traditional CAD users and there is the larger audience for the information. The larger audience now wants access to the drawings on their mobile devices.” Graebert says the market will be wide open for growth as soon as more people discover CAD can be a utility for daily use.

Graebert tailors its three products for the nature of the intended user: ARES Commander on the desktop (Windows/Mac/Linux) is a full-featured professional software application for daily use. ARES Touch (Android/iOS) can edit DWG files, but offers an interactive “see it when you need it” user interface. ARES Kudo (any computer with a browser) can also edit DWG files, and provides the technology that keeps drawings used on all three products synchronized. 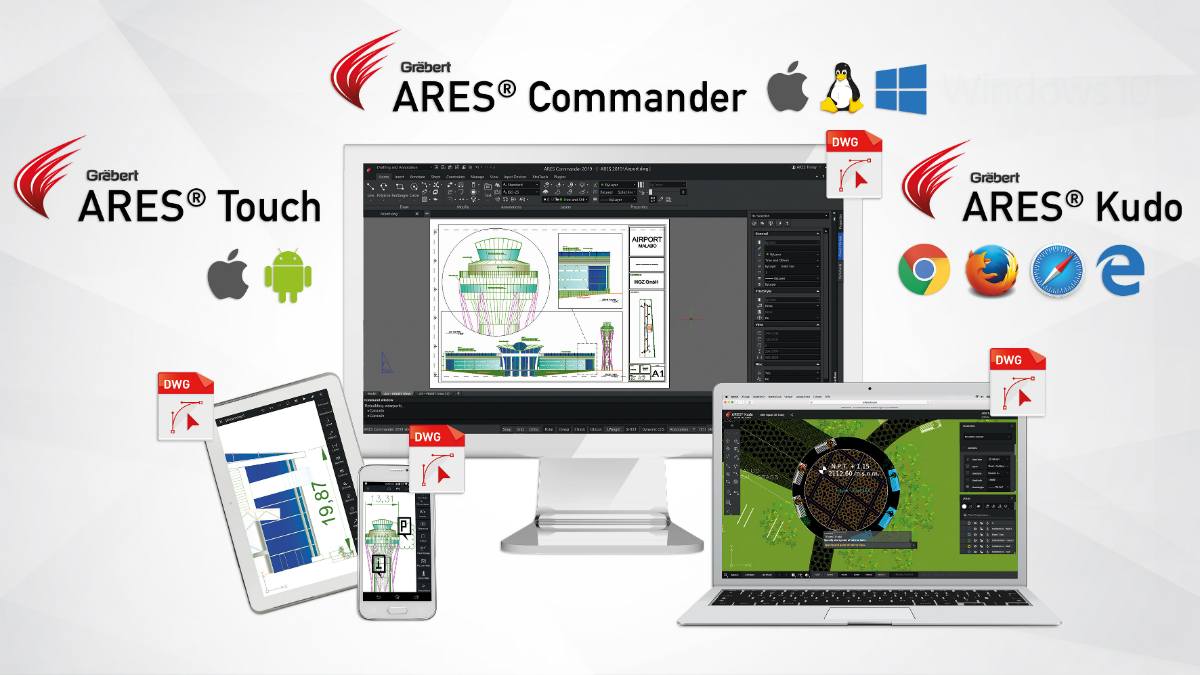 Graebert publishes three versions of its DWG-compatible ARES CAD platform: Commander for desktop, Touch for mobile devices, and Kudo for browser-based use.

“We find there are three to five mobile users ready [for CAD] for every existing desktop user,” says Desbordes. “There are perhaps 10 million users of DWG worldwide. We believe the market can grow five to ten times larger.” For example, one Graebert corporate customer has 1,000 CAD desktop users. After an internal review, this customer reportedly realized that there are an additional 7,000 employees who need either regular or occasional access to drawings. “Cloud and mobile are not cannibalizing desktop users,” Desbordes says, “they are companions.”

Next Steps for DraftSight

Berlin-based Graebert is in a unique position to view the market: It is responsible for the technology inside more copies of CAD than any vendor except Autodesk. But very few people who use Graebert technology recognize the company name. Most people using Graebert technology get it from Dassault Systemès, which is known for CATIA and SolidWorks 3D modeling software but is also the vendor of DraftSight — which is powered by Graebert technology — for DWG-based workflows. DraftSight is available in both personal (free) and professional (paid license) versions.

“2D and 3D are inherently connected,” says Andreas Kulik, Dassault Systemès executive in charge of the DraftSight line. “It is not 2D to 3D, it is synergy of applications for the right job at the right time in the design environment.”

Dassault claims the market for DWG-based CAD is very much alive and well in manufacturing and product development. It plans to formally announce a new version of DraftSight in February, at SolidWorks World 2019, that will extend the product with new features.

DraftSight 2019 will emphasize four components of the 2D/3D workflow: digitization, conversion, transformation, and augmentation. There will be new tools for transforming images or other vector content into drawings, quickly transforming 2D views into 3D parts, and then converting them to the SolidWorks data format. Kulik says the next version of DraftSight will stress interoperability “in the context of moving design data from one tool to another without friction and without effort.”

Dassault will also deepen the existing integration of DraftSight into its 3D Experience Platform with new capabilities that will allow DraftSight access to the 3D Experience Marketplace for those seeking part validation and manufacturing partners. “We have a global network of industrial service providers,” says Kulik. “Integration with DraftSight allows access to this marketplace.” Dassault also intends to use Graebert’s Kudo technology for cloud-based CAD, but is saving the specifics for the February announcement. There will also be a DraftSight application programming interface (API) that customers can use for customization, as well as a commercial network for DraftSight add-ons to be distributed in the 3D Experience Marketplace.

During its Annual Meeting, held earlier this month in Berlin, Germany, Graebert launched ARES for Enterprise, a premium version of ARES CAD software for companies needing 100 or more seats. The Enterprise version is supplemented with additional features for user administration, license management, support for single sign-on (SSO) in Microsoft Active Directory, support for Amazon Web Services, and the ability to deploy ARES Kudo from an internal server.

"ARES for Enterprise is going to be a big focus for Graebert, as we see the Trinity of CAD concept is helping us to break in some very large accounts," said Desbordes. "With mobile and cloud we took a head start in technologies that help to deploy CAD features to a much larger audience."

Graebert also announced the launch of FxARK, a new API from Graebert offering developers the capability to reuse C++ code written for AutoCAD ObjectARX "with no modification," according to the company.