The $70 million acquisition is the latest move in PTC’s strategy to fold generative design, real-time simulation, and more cutting-edge capabilities into its CAD platform.


PTC announced this week that it has paid approximately $70 million for Frustum, a young generative design software company. “This acquisition represents an important strategic move in our Creo business, which is our largest and most profitable,” said PTC president and CEO Jim Heppelmann during a November 20 webcast.

“When you combine the real-time generative design from Frustum, and real-time simulation of Ansys, you enable a single engineer to do the work of many,” said Heppelmann. “Artificial intelligence, teamed up with simulation, has the potential to create the first major disruption in CAD in thirty years.”

Heppelmann’s enthusiasm comes after what is apparently a long period of disappointment with the CAD software industry’s progress: “About 30 years ago, PTC unleashed a massive disruption when we launched Pro/ENGINEER, the first viable 3D CAD solid modeling product. We built a tremendous business around Pro/ENGINEER, but after a decade or so of being the only game in town, a handful of companies — today’s well-known competitors — essentially copied the Pro/E concept, more or less verbatim, and the market quickly became very crowded and competitive. The combination of product parity and high switching costs caused a stalemate to ensue. In the two decades that followed, virtually all technology innovation across the entire CAD market has been of the incremental form. All major CAD systems today are just broader and prettier imitations of the original Pro/ENGINEER software that PTC released in 1987.”

That static landscape is finally changing, Heppelmann believes, as the CAD market enters a “renaissance period” thanks to breakthroughs including artificial intelligence (AI), volumetric modeling, the Internet of Things (IoT), augmented and virtual reality (AR and VR), and cloud-based and high-performance computing (HPC). 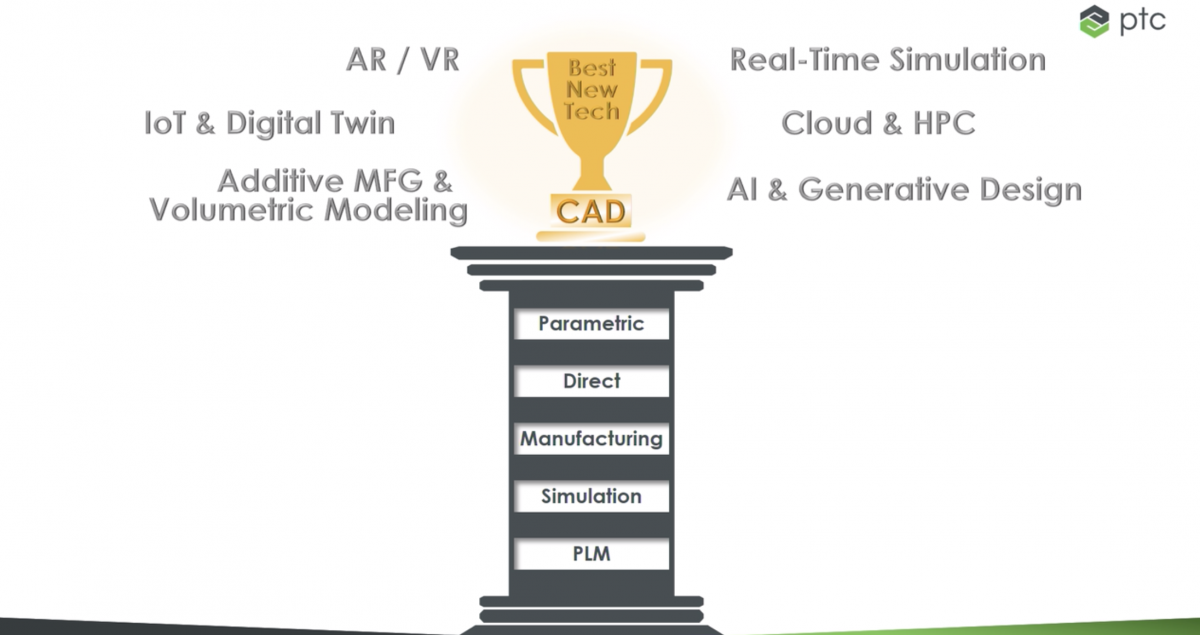 With the assistance of aquisitions and partnerships, PTC is working to incorporate a variety of new technologies into its CAD portfolio.

But there’s a catch: “These new technologies could be disruptive, but only to those who can solve for the switching costs. Said differently, none of these breakthroughs will disrupt anything if they don’t somehow incorporate the massive foundations of today’s mainstream CAD systems,” he said. “The reason why one CAD startup after another has failed, even when funded with massive amounts of [venture capital], is because they can’t possibly get customers to switch to their shiny new toy.”

A solution to this institutional inertia, according to Heppelmann, is to have “the new innovations to come to life inside the mainstream tool [product development companies are] so dependent on, not in another product parked next to it. That’s why PTC has been working so hard to build this new generation of disruptive technologies directly into Creo.”

PTC will work to incorporate Frustum’s AI-driven generative design and volumetric modeling capabilities into Creo “as fast as we can”; the first release is planned for Creo 7, expected in March 2020. ANSYS Discovery Live simulation technology is already being built into Creo, with first availability expected in December. In addition, Heppelmann noted, the company has already delivered the first rounds of Thingworx IoT and Vuforia VR/AR capabilities in Creo. “PTC is on a path to deliver future generations of Creo that truly are disruptive,” said Heppelmann, “because they combine the most powerful new technologies with a proven foundation that’s deep and wide, so the new capabilities can readily be adopted.”

Heppelmann believes that the capabilities provided by Frustum and ANSYS technologies will work synergistically to make the design creation and validation process much faster than it is currently. Traditionally, he explained. a CAD user would create a design, which would be validated after completion, leading to “significant rework” if a problem was discovered. “The ability to pull simulation upstream [with ANSYS Discovery Live] and apply it to each and every design change is a huge breakthrough,” he declared. “It means that the user is guided at every step along the way as they iterate, and every part will have been simulated hundreds — or even thousands — of times before we even get to the validation phase, so the odds of finding major problems late in the game drop precipitously.”

But real-time simulation is only part of the equation. “Of course, it would be better yet if the software didn’t just follow the engineer through iterations, but could engage even earlier to proactively generate a design that could be used as a starting point, or perhaps generate a series of different approaches to pick from. That breakthrough is called generative design, and it’s precisely what Frustum does,” Heppelmann continued. “At each step in the iteration, the ANSYS Discovery Live technology will help the Creo users understand the implication of each and every change, and in so doing, guide them quickly toward a robust solution.” And when a design is complete, ANSYS Discovery AIM capabilities — also embedded in Creo — can be used to validate it with high-accuracy simulations across a range of physics domains and techniques. 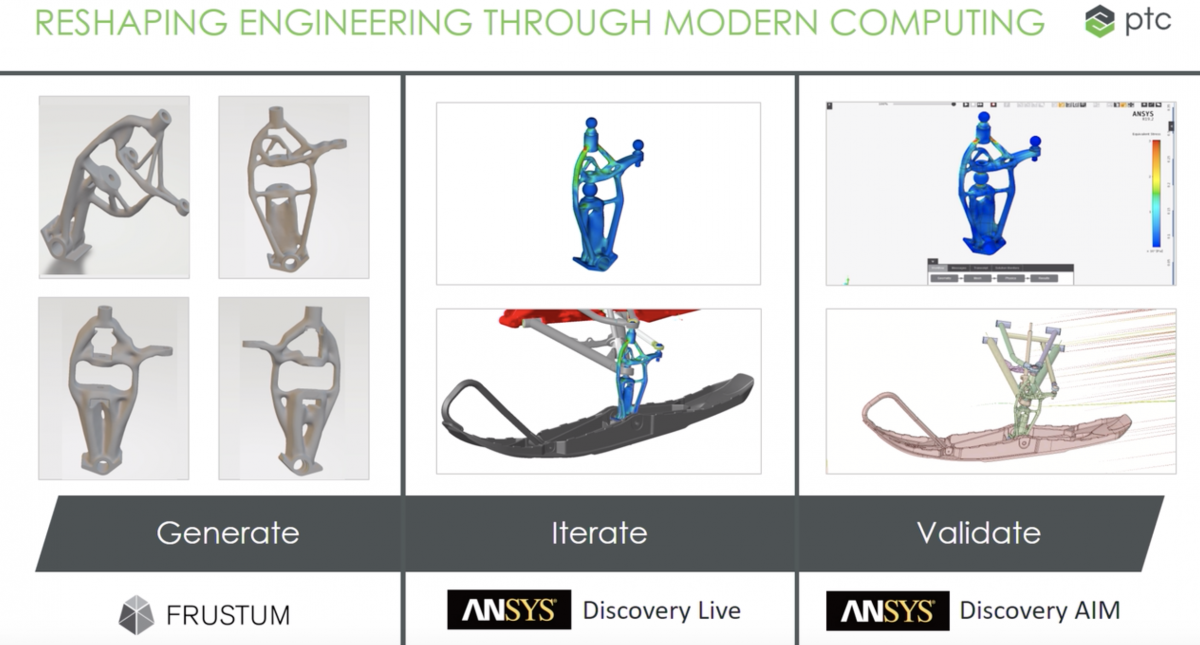 PTC expects the incorporation of ANSYS and Frustum technologies into Creo will dramatically alter the generation, iteration, and validation stages of design.

Heppelmann pointed out that all these phases require “intense computing power,” and will eventually require a move from local GPU-based processing to the cloud. That means that Microsoft will have an increasing role in Creo’s future, Heppelmann predicted, as that heavy-duty processing power ultimately that will come from Microsoft Azure. And as PTC’s plan continues to roll out, Microsoft surely won’t be the last partnership or acquisition to serve the goal of a Creo portfolio that will shake up the CAD industry.