Offering more than modeling and analysis, the nTop Platform is also an authoring environment for repeatable engineering workflows — because ‘nobody should have to do things twice.’


Will generative design technology continue to shake up workflows and markets? If the investment dollars flying around are any indication, many people are betting that it will. One recent example is the purchase of Frustum, which was snapped up by PTC last year for $70 million.

Another is nTopology: The launch of its nTop Platform in July was closely followed by the announcement that the four-year-old startup had raised another $20 million, boosting its total funding to $31 million. In other votes of confidence, Carl Bass (familiar to many Cadalyst readers as the former CEO of Autodesk) joined nTopology’s board this year, and the company is adding such big names as Lockheed Martin, Daimler, Disney, and the U.S. Department of Defense to its list of customers.

So yes, generative design is garnering a lot of attention at the moment — but it’s not something exclusive, in the perspective of Bradley Rothenberg, cofounder and CEO of nTopology. “I think of all design as generative at [its] heart,” he told Cadalyst. “You’re making a design from something that didn’t exist, or you’re making a new design to replace an old part, and that’s the definition of generative.”

As Rothenberg sees it, what really differentiates nTopology’s nTop Platform is not its generative design capabilities, but its ability to set up repeatable engineering workflows. “Normally when you model a part, you’re clicking and drawing that part, and your interface with [it] is creating one part,” Rothenberg explained. “In our software, you’re really creating a process that can create multiple parts, or can iterate through a design process.” (This can be likened to creating a recipe rather than just a lone pie.) 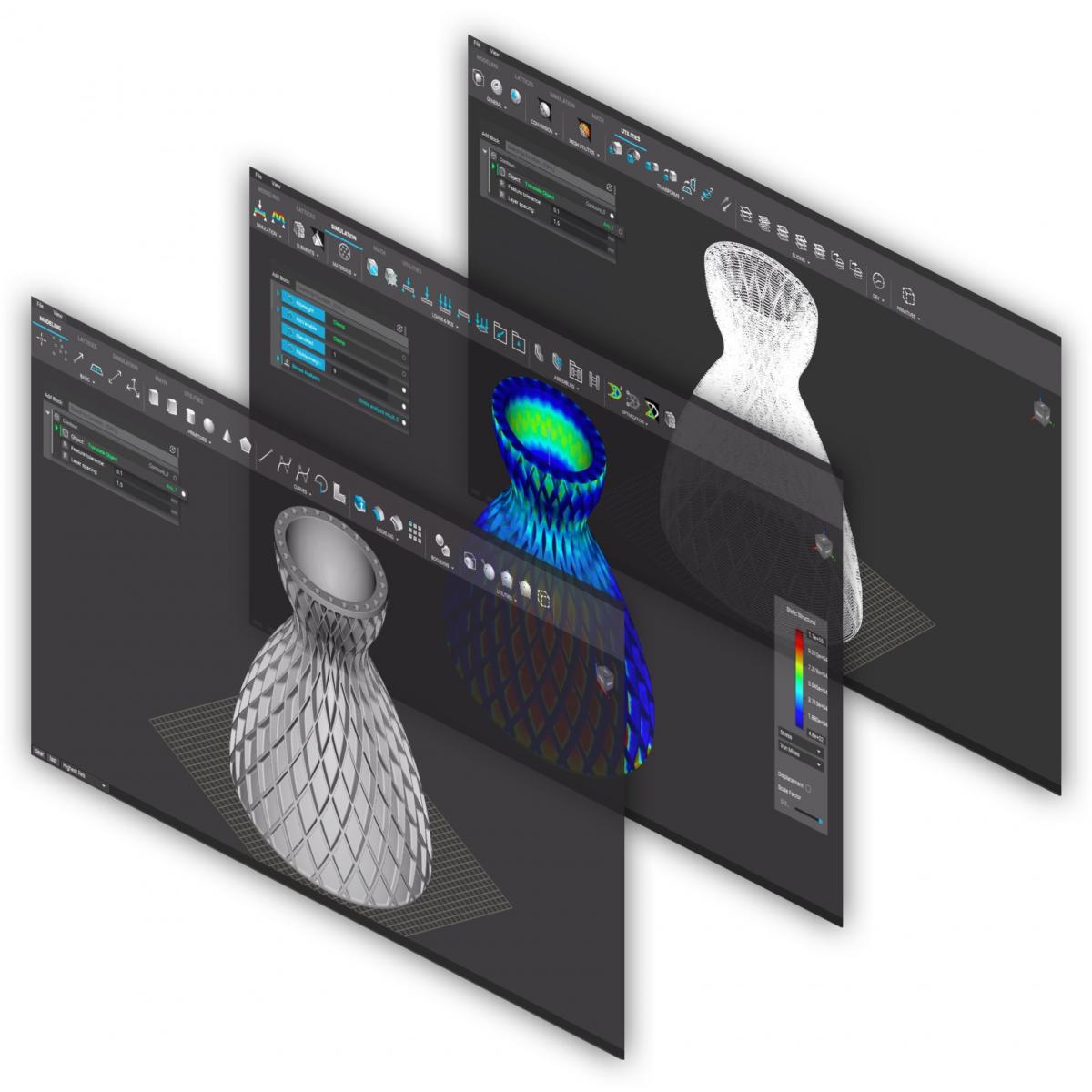 Various stages from the workflow for a rocket nozzle design. Image source: nTopology.

There is an essential requirement for reusing components in this way, Rothenberg explained: “The only way you can do that is if your underlying model never breaks … the model has to be reliable enough to update and work [whenever changes are made].” Traditional models break “very easily,” he said, such as when referenced edges disappear; nTop models reportedly never fail or stall, regardless of file size or model complexity. Although the n in the name nTop means any — as in, users can make any shape — “we joke around that it means no topology,” Rothenberg said. “We don’t have topology in the traditional sense, [where] you can click on edges and offset them.” That can be an advantage, he said, because topology is the root of many errors.

Users can build templates in CAD applications, Rothenberg noted, but they must be intentionally created, and they work only for “very specific” cases. “In nTop, you’re always making a template; whether you know it or not, you’re making something that’s reusable. … Nobody should have to do things twice,” he stressed.

The platform is also open, meaning that these reusable workflows can be shared with other applications. “It’s really about being open about how we connect to the existing engineering infrastructure, and open with how people can develop on top of it: [They can] use our APIs to connect within bigger systems … nTop works really well with other CAD tools,” Rothenberg said. “It’s really about an environment that you can build on top of, and build into your existing workflows; it’s not like you have to throw out everything you have and use just nTop,” he said.

“You can use nTop to break down silos,” Rothenberg continued, referring to the all-too-common compartmentalization of departments, functions, and workflows that plagues enterprises. “I look at each big enterprise customer as its own open environment.”

The cost of nTop Platform is “around the same pricing as traditional engineering software,” said Rothenberg, with a range of prices depending on factors such as the proportion of user types (how many users need workflow authoring capabilities vs. runtime users). 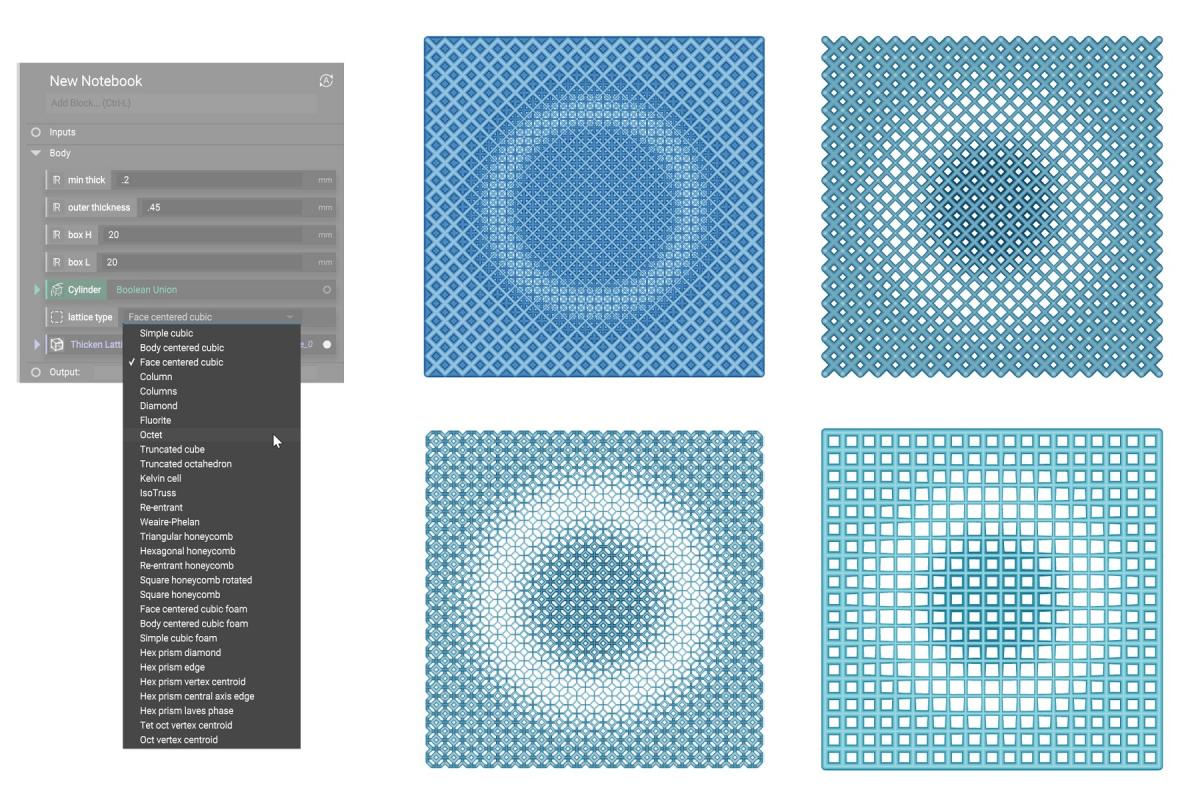 Four different lattice structures responding to a distance-based modifier via variable strut thickness. This example demonstrates how users can make major changes to their design while simultaneously respecting the constraints. Image source: nTopology.

At nTopology, the mission is to enable engineers to ship the highest-performing parts in the least amount of time. Additive manufacturing technology, which can quickly make even customized parts on demand, has helped speed things up — but that leap forward on the production side means that it’s now software that’s often standing in the way of efficient product development. “The speed and complexity that additive manufacturing enables have highlighted a major capability gap in the enterprise engineering software stack: extensive trade studies, rapid iteration, and parts with complex geometry, all necessary to innovate fast, are bottlenecked by software,” Rothenberg wrote in a recent blog post. “Companies need the capability to solve engineering problems in real time to maintain a competitive edge across all industries.”

The nTop Platform, a single software platform in which engineers can design a part, analyze it, and prepare for manufacturing, is Rothenberg’s answer to these deficiencies. According to the company, nTop Platform helps users automate processes, capture engineering knowledge, and ultimately, iterate faster, drawing on CAD or mesh data, built-in simulation, and reusable workflows.

“CAD people are used to always thinking there’s a catch, because they’re so used to working through software that doesn’t solve their problems; [with traditional tools,] you have to find hacks or roundabout ways to get things done,” Rothenberg said.