SOLIDWORKS 2019 Focuses on Current Productivity, while Preparing for Tomorrow’s Tech

With the latest update of its 3D design and engineering portfolio, Dassault Systèmes aims to address the needs of existing customers — and those it doesn’t have yet.


Dassault Systèmes launched SOLIDWORKS 2019 this week, announcing improvements to the portfolio of 3D design and engineering applications that, according to the company, decrease design-to-production times and improve design flexibility. “Like every year, we made a lot of enhancements this year,” Manish Kumar, vice-president of research and development at Dassault Systèmes, told Cadalyst. Kumar emphasized that the full portfolio of applications — the “entire design ecosystem,” as he put it — is improved with each annual update. “Today, SOLIDWORKS does not just do CAD,” he stressed.

“We always have themes around which we try to energize and focus our entire team,” Kumar explained. This year, the focus was on performance — especially the performance of large assemblies. SOLIDWORKS 2019 features enhancements to the Large Design Review functionality, enabling users to quickly interrogate or adjust models that comprise many components, while preserving shadows, reflections, and other visual elements.

During a broadcast of the launch event, Mark Schneider, senior product introduction manager for SOLIDWORKS, compared the manipulation of a 7,500-part telescope model in SOLIDWORKS 2018 and 2019; motion lagged and was jerky in the former, but smooth and responsive in the latter. “When you have these massive models … you want to be able to interact with them and work with them and kind of zoom around,” Schneider commented. “[In SOLIDWORKS 2019,] you can zoom, pan, rotate very fast … it feels like I’m rotating a block around on the screen.” This improvement was accomplished, Schneider explained, by moving more of the computational work involved from the CPU to the graphics card. 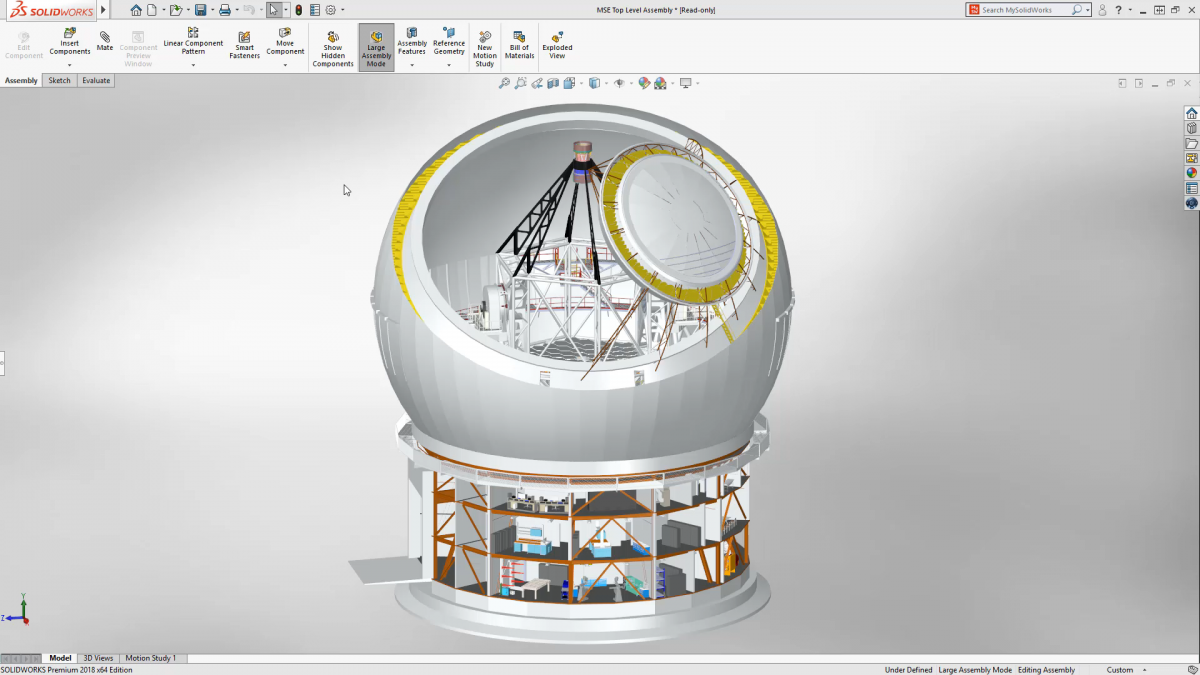 The Canada-France-Hawaii Telescope (CFHT) Corporation is is using SOLIDWORKS software to support implementation of the Maunakea Spectroscopic Explorer, a 10-meter-class telescope devoted to spectroscopic exploration of the universe. Large models like this one, which comprises some 7,500 parts, can be manipulated smoothly with the enhanced Large Design Review functionality in SOLIDWORKS 2019. Image courtesy of SOLIDWORKS.

This improvement was accomplished by moving computational work from the CPU to the graphics processing unit (GPU). Siddharth Palaniappan, senior manager of graphics R&D, explained: “We changed our design and programming paradigms … so you’re no longer bottlenecked by the CPU, but it’s more focus put on the GPU. We came up with a bunch of algorithms that directly work with the data set on the GPU. The advantage for this is that … your performance scales across different generations and models of graphics card.”

Other SOLIDWORKS 2019 features include the following:

Kumar pointed out that his company is always looking at two sets of customers: Those it currently has, and those who will be customers in the future. The latter group “does not have a voice currently,” but the SOLIDWORKS team tries to take their needs and preferences into account nonetheless. “We try to predict the future,” Kumar explained. “[We’re always asking,] where will we land in the future?”

Planning for cutting-edge technologies and features does not usurp the team’s primary focus on current productivity and performance: Of the more than 400 projects the team worked on for the 2019 release, the effort devoted to AR/VR and touch capabilities was “miniscule” compared to other areas of development, Kumar said. He acknowledged that most customers aren’t even asking for those capabilities yet: “Do they want touch? Most likely, the answer is no.” But the team can’t wait for demand before they start development, because in each case, “it is going to take time to make it perfect,” he said.

In addition, the rate of technological change — and demand — is unforgivingly fast. As an example, Kumar pointed to the adoption curve for 3D printing. “Three or four years back it was still rocket science [to many people] … now people have 3D printers at home.”

What’s Next for Product Design

Kumar observed that with mechatronics and the Internet of Things (IoT), “the market is definitely changing.” He pointed to the Nest thermostat as “a big game-changer … that is opening up a lot of hearts and minds.” Once people see the potential of a device like that, which captures information and behaves intelligently in different situations, their thinking about product design changes. “People can no longer just create a mechanical component and be happy … [now they’re asking,] How can I embed electronics? What kind of [electrical] harnessing will it need?”

Although it’s not mainstream yet, “we’re seeing more and more customers going in that direction,” Kumar said. “We see the ‘Nest mentality’ creeping up more and more in design.”

Kumar also sees a need for more focus on materials science in design, and applying the insights it provides to supplement topology optimization. “It’s one thing to say that if everything was perfect, this is the perfect model … but other factors come into play, such as temperatures of manufacture.” It’s necessary to take all that information into account to come up with a design that’s perfect for the real world. “We are not leveraging materials information as much as we should … there is some revolution needed there, for sure,” he said.