Scheduled for launch in Netfabb 2018, Autodesk Generative Design seeks to help product designers by boosting the “computer-aided” part of CAD.


Autodesk has been talking about generative design software for some time. At Autodesk University 2014, Chief Technology Officer Jeff Kowalski explained that although the idea wasn’t new, it had been largely theoretical — until cloud computing made the compute-intensive process fast enough to be feasible.

Generative design is an umbrella term that covers several methods of creating designs that meet constraints established by the designer. These constraints might include the amount or type of materials used to create the product, its cost, or its weight. Reducing weight while maintaining strength and rigidity is a common goal, because cars and planes built with lighter components use less fuel.

What differentiates generative design from traditional design processes is that the design solutions are created autonomously, thanks to artificial intelligence–based algorithms. This results in solutions that a human designer might never think of — and far more of them. As Autodesk states, “In the time you can create one idea, a computer can generate thousands, along with the data to prove which designs perform best.” 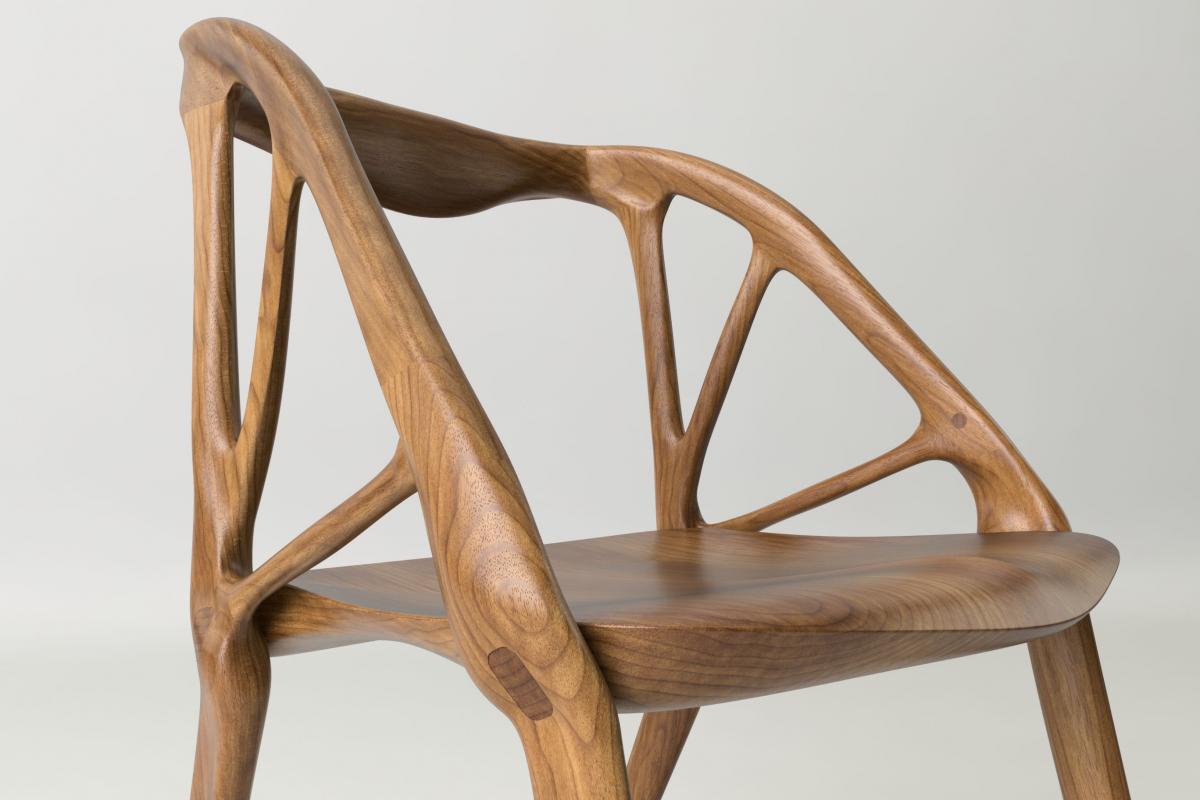 The Elbo chair was designed using Project Dreamcatcher generative design technology. The software produced this design within the constraints it was given, including supporting 300 lbs. Project collaborators included Brittany Presten, John Hutchinson and the Fusion Render team, and Carl Bass. Image courtesy of Autodesk.


Last week, Autodesk took the next step in its exploration of this technology, and announced its first commercially available generative design product. After years of development as Project Dreamcatcher, the descriptively named Autodesk Generative Design tool will make its commercial debut in Netfabb 2018.

That’s why Autodesk Generative Design will start out with a focus on additive manufacturing, but the software will be developed further to support additional manufacturing technologies such as CNC, casting, and injection molding. “It’ll evolve very quickly … we’re talking about a period of 18 months to 2 years,” predicted Autodesk Vice-President of Simulation Greg Fallon.

Autodesk Generative Design is currently in limited beta testing, and will be officially launched in Netfabb 2018, scheduled for release toward the end of 2017. The beta will be expanded to include all Netfabb subscribers later this summer.

Autodesk Generative Design is not the first generative design product on the market, nor the first focused specifically on product design. What differentiates Autodesk’s take on the technology?

“Generative design means different things to different people,” Fallon noted. For some, it means replacing solid supports with lighter latticed structures; to others, it’s topology optimization. Autodesk’s vision, however, is closer to “generative product creation,” Fallon said. “You’ll be able to come up with designs that are fully manufacturable,” he explained, and eventually, the software will extend further into the manufacturing process, including running machines and ensuring that needed materials are on hand.

To clarify, Fallon used an analogy. Topology optimization is a good tool for lightweighting, and can be likened to optimizing a shipping route between two cities: It determines the best path for the ship to take, taking into account weather patterns and other constraints. Autodesk Generative Design is more like taking a step back and asking, Should you be taking a plane or bicycle or car instead of a ship? In other words, “[It enables you to] explore ideas you wouldn’t normally come up with,” said Fallon, rather than perfecting an existing idea.

Simulation is most often used to validate design ideas after they’re created. That’s important, but when simulation is applied so late in the game, its ability to influence design is limited, Fallon explained. Generative design moves simulation closer to the beginning of the design process.

Not everyone is thrilled about the prospect of having artificial intelligence shoulder a large portion of the design burden. Will generative design render human designers obsolete? Absolutely not, according to Fallon, who called the idea that we won’t need human designers anymore “totally insane.”

Autodesk’s position is that the technology changes the role of CAD users, allowing them to focus on design instead of record keeping. “Generative design changes that paradigm, really makes it computer-aided design,” Fallon said; the software comes up with its own solutions, rather than simply recording what’s drawn by the designer. With that assistance, professionals can leverage their creativity and technical skills to the utmost, Fallon believes: “Generative design is really meant to give the designer or engineer super powers.”

A future where designers are superfluous is not the only concern generated by generative design. “Companies will have to figure out how this technology fits into their existing design processes,” Fallon noted. “I can imagine that being pretty disruptive.” Those implementation challenges won’t include a significant training burden, however: “If you have a basic engineering education, these tools should be very familiar for you,” he affirmed.

Then there’s the challenge of keeping up appearances. Items created with the help of generative design technology often look quite different from what we’re used to seeing — they’ve been described as organic, skeletal, and alien. That can be a plus in some applications, but a minus in others. “The aesthetic issue is one we all have to figure out,” Fallon observed.

The company is working on giving designers greater ability to refine Autodesk Generative Design output — “to make it more beautiful, or more like the brand the design is representing,” Fallon explained. Although those adjustments are currently done manually, in the future artificial intelligence could be harnessed to make designs conform to a particular brand’s visual style, he said.