With a focus on ease of use and an intuitive method of 3D content creation — a virtual reality interface — Gravity Sketch hopes to persuade designers to drop 2D sketching from their workflows.


When they’re struggling to communicate an idea or make a point, many people automatically start “talking” with their hands — not using sign language, but supplementing their spoken words with gestures for added meaning and emphasis. These physical movements can help the speaker define their own thoughts, as well as share them with others. And using the hands to mime actions, indicate subjects, and even sketch pictures in the air is such a natural impulse that many speakers don’t even realize they’re doing it.

But those gestures are only useful in the moment — when the conversation ends, there’s nothing of their meaning left behind. Gestures made in virtual reality (VR), however, are another story altogether: A user working in a virtual design space and equipped with handheld VR controllers can sketch out lines and shapes that persist beyond the gesture.

That’s the vision behind Gravity Sketch, a 3D design software tool that can be used with an Oculus Rift, HTC Vive, or Windows Mixed Reality VR headset and a pair of motion-tracked controllers. With this technology, designs drawn in the air can be captured as they’re created, refined, and even sent on to other software applications if desired. After creating 3D models, scenes, or artwork in Gravity Sketch, users can export their work — to another design tool, a CAD application, a game engine, or a 3D print platform — or upload it directly to the cloud.

Oluwaseyi Sosanya, cofounder and CEO of Gravity Sketch, demonstrated this method of VR interaction during our meeting at the SIGGRAPH conference in August. (Gravity Sketch also supports pen-based input on a tablet, or input from the Leap Motion controller, which tracks hand movements but is not a handheld device.) Starting from a blank slate, he was able to sketch out the initial lines of a car, adjust them to his satisfaction, add surfaces, and apply paint colors and other details to create a finished-looking concept model in a little more than five minutes. One advantage the VR interface offers to designers creating big objects — such as cars — is the ability to enlarge the model and place themselves next to or inside the vehicle while they work, getting a better sense of scale, proportion, and what the end-user experience will be like. Unlike a flat display screen, the immersive design environment can provide a perspective similar to a real-world encounter with a life-size physical object. 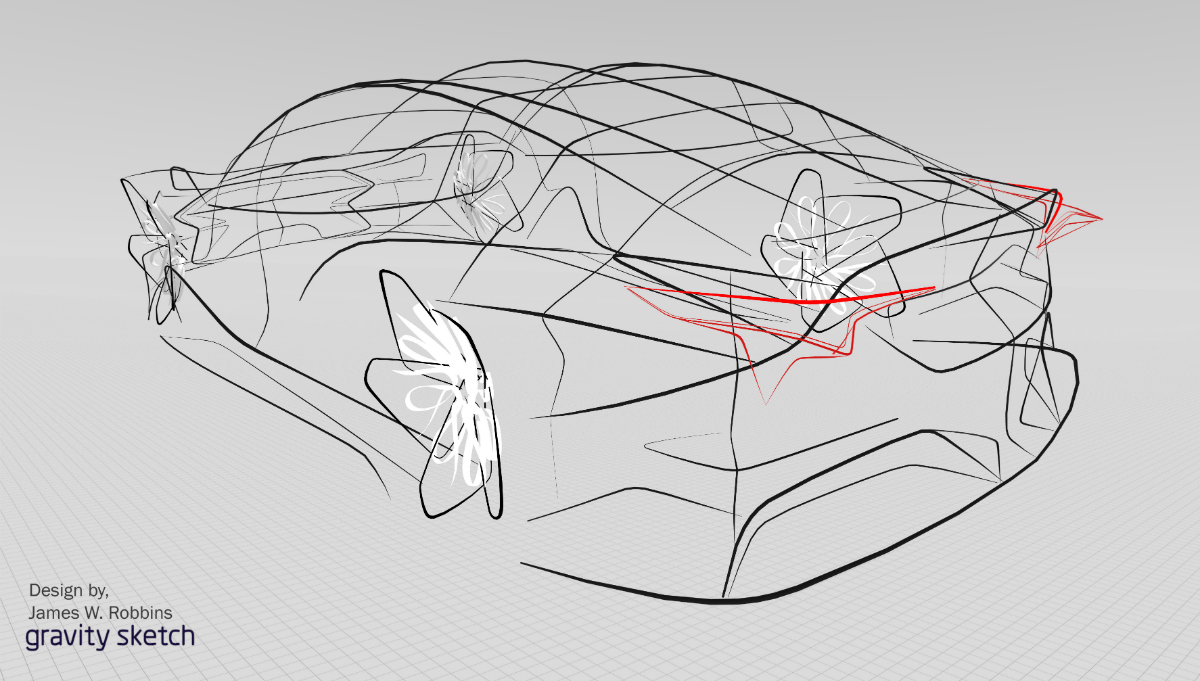 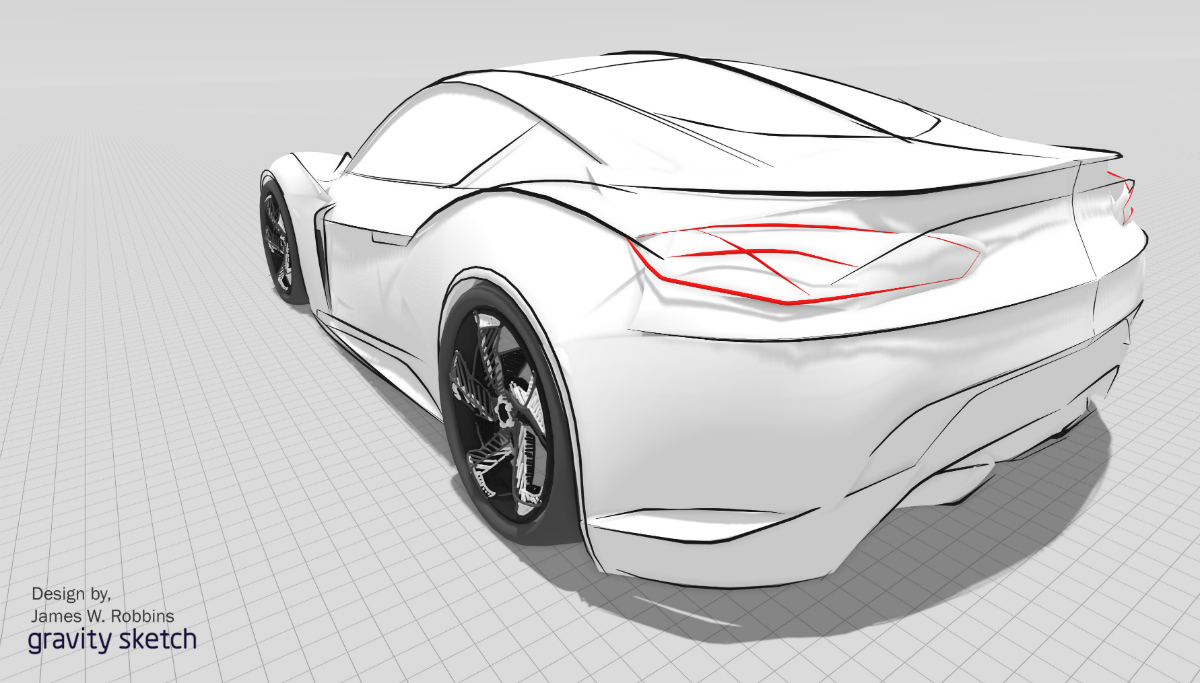 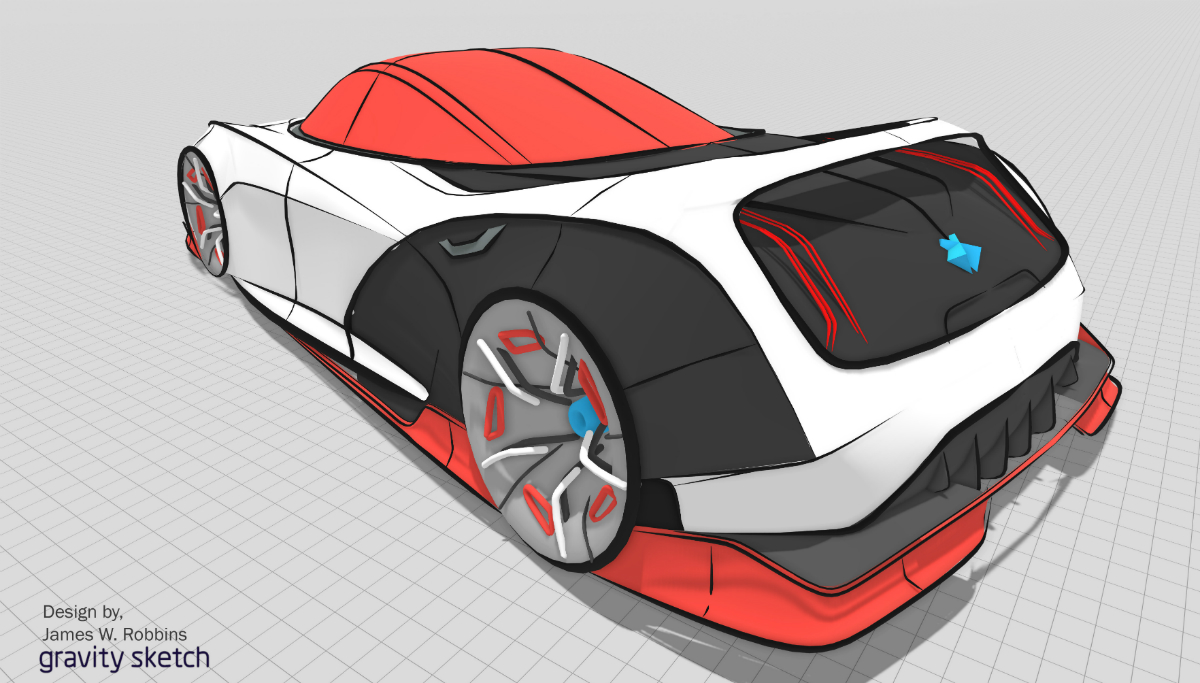 These automotive designs provide snapshots of a workflow in Gravity Sketch, from line work to surfacing to styling.

Sosanya also made the case that the style of working in Gravity Sketch offers freedom of expression that CAD applications don’t. “There’s no linear order of operations … [it’s similar to the] spur-of-the-moment nature” of scribbling in a sketchbook, he said. In addition to lowering one obstacle to creativity, this means the experience is also more fun for the user, Sosanya believes: “the more intuitive and humanistic [the method of creation], the more enjoyment” users will experience. “By nature, people are going to want to work in that way,” he said.

In Sosanya’s view, Gravity Sketch is more than a design tool; it’s also a much-needed way to improve collaboration. It’s “a communication tool that grew into an amazing set of tools a designer can use to explain themselves,” he said. In his experience, the barriers between different groups within a firm hinder clear communication of ideas, waste time, and force effort duplication. “One thing that’s really apparent is that design and engineering are often separated,” as if there’s “a concrete wall between them,” he observed.

When a stylist sketches out a new car concept in two dimensions, for example, the next person in the chain has to start from scratch to create that design in a CAD application, using the drawings for visual reference only — a process that can take as long as three weeks, said Sosanya, and some of the original designer’s intent may be lost in the translation. With Gravity Sketch, which is parametrically based and preserves all the points in the concept sketches, users can “preserve the sketch from stylist all the way through pipeline” instead.

Gravity Sketch is currently available for licensing (through Steam and the Oculus Store), but is not yet a “complete” product, according to the company; it is still identified as “early access software.” Earlier this month, Gravity Sketch released version 1.5, which includes new drawing tools, geometry types, and export options; an experimental surface-patching tool; and the addition of orthographic views.

The company states that feedback from the community in these early stages helps shape the ongoing development of the software. “Putting the users at the center of our development has allowed us to continue creating a software that is not only applicable to those from technical and digital backgrounds, but is also created in a way that it can touch creatives in all walks of life regardless of their creative prowess,” said Sosanya, in a recent press release.

Sosanya predicts that as it continues to evolve, Gravity Sketch will prove highly useful in the design of “highly aesthetic and highly functional” products beyond cars, such as footwear and apparel. The company is even looking at adding physics to see how fabric drapes, he said. There’s potential in architecture as well, he noted, to streamline the design stage — which can consume two years in a 10-year building process.

And as a strong advocate of improved collaboration, Sosanya is enthusiastic about the possibility of co-creation in the future, with two or more people working in VR together. “That’s when design will really accelerate,” he said.