HP and NVIDIA call on architects and engineers to envision a home for humankind on the Red Planet.


Online fundraisers that rely on help from the masses to pay for softball uniforms, business startup costs, or a much-needed surgery are commonplace today. Crowdsourcing of intellectual capital may not be as widespread, but it is becoming increasingly popular in the design community. The recent Project Soane rendering competition, for example, called on participants to recreate a long-lost architectural treasure — Sir Jon Soane’s Bank of England — in digital form.

Now, HP and NVIDIA, along with Autodesk and other collaborators, have launched a more ambitious initiative. The Mars Urbanization Challenge, part of the HP Mars Home Planet initiative, will crowdsource design ideas, model the best of them, then use virtual reality (VR) to simulate what human life on the Red Planet might look like. Rather than imagining the experiences of a few explorers taking their first steps, the project seeks to depict the buildings, transportation systems, protective clothing, and other everyday elements needed for an entire community to thrive.

“Our mission is to reinvent life on Mars,” said Sean Young, HP’s worldwide segment manager of product development and AEC, during a webinar on the subject. “We want to fast forward to … when there’s going to be a million people, sometime in our future, living on Mars.”

To better understand what that future might be like, HP is inviting architects, mechanical engineers, scientists, 3D artists, and other professionals, as well as students, to help create an immersive, interactive depiction of life on Mars, using VR. This is no far-fetched science fiction story, however. The Mars Home Planet initiative will address urbanization challenges that may become real-life concerns in less than 20 years: NASA has already begun work on its goal of sending humans to Mars in the early 2030s.

In the first stage of Home Planet’s Mars Urbanization Challenge, participants will create transportation and infrastructure concepts for Mawrth Vallis (Mars Valley) — a location that NASA has identified as a potential landing site. Participants will submit bitmap images and text descriptions of their concepts by September 15; subject matter experts and others will evaluate submissions and provide feedback; and on October 7, voting will begin.

“We’re looking for submissions in the areas of infrastructure, architecture, mechanical engineering, pure artistic creativity, science — we’re looking for innovation, in the context of this Mars society,” said Young. Prizes totaling nearly $40,000 are on the line, including a variety of HP computers and monitors.

Stage Two will kick off on November 3, during Autodesk University. Selected designs will be made into 3D models in CAD applications, Autodesk 3ds Max, Maya, etc. In the third stage of the challenge, beginning during the NVIDIA GTC conference in March 2018, the designs will move into rendering. Anyone can download the open-source models for rendering, said Young: “It’s a competition, but it’s also a bit of a collaboration.” In August 2018, at the SIGGRAPH conference, the final VR experience will be revealed.

To bring project ideas through from concept to complete VR experience, HP and NVIDIA have partnered with Autodesk, Fusion Media Group, Launch Forth, Technicolor, Unreal Engine, and VIVE. “There’s a lot of work to do to bring the engineering and architecture data into VR,” said Young.

Launch Forth, a division of crowdsourced car developer Local Motors, is a product development platform and community that seeks solutions to design and engineering challenges. “The platform is built to support teams,” Young noted. “Inside the Launch Forth community, It’s meant to be a place where you hang out, have conversations, and get information.” To that end, subject matter experts from a variety of domains will be available through the platform to help with questions about software, space, and other aspects of the competition.

Autodesk software will be used to create 3D models; Technicolor will provide creative and technical leadership, guiding a community of volunteers to bring those 3D models to life; and Unreal Engine will provide the VR experience platform. The VR environment will build on terrain from Fusion Media’s Mars 2030 VR video game, which was modeled using high-resolution photography and other data from NASA. (The first 10,000 registered challenge participants can download the game from Steam for free.) “The terrain is really well done; we’re going to layer on some additional code in Unreal to really make this highly realistic and representative of the science of Mars,” said Young. “But we need more than just the terrain to have a fully immersive VR experience.”

That means participants will need to think about everything from vehicles and parks to plumbing and farming challenges. Designs will have to account for constraints unique to Mars — including massive dust storms, reduced sunlight, and surface gravity that’s only 37% of Earth’s. But in some ways, designing for this scenario will be easier than more familiar projects. “You know what’s cool, there is no as-built — there’s no built envelope to manage around,” Young commented. 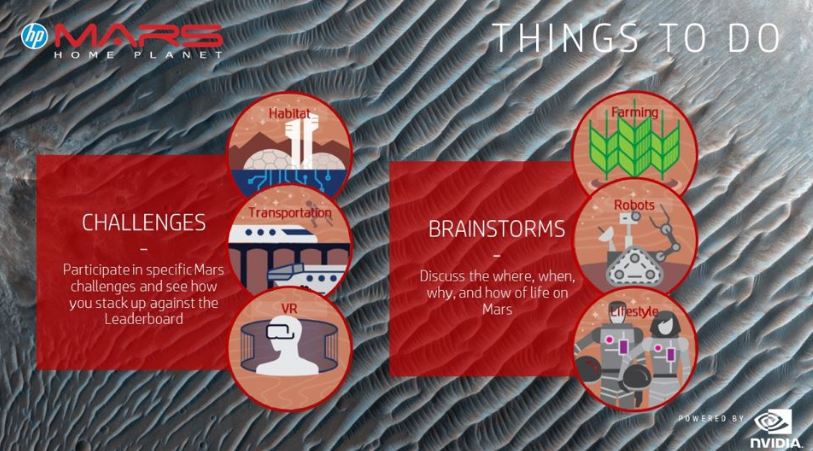 In addition to designing buildings and transportation systems, challenge participants will explore other essential elements of life on Mars such as how to grow food and protect inhabitants from radiation.

Andrew Rink, NVIDIA’s senior manager of global marketing strategy for MFG and AEC, made a similar observation: “On the one hand, these are challenges; on the other, this scenario offers an opportunity to think outside the box and imagine the kinds of things that would not be feasible on earth.”

The Tools That Boldly Go

HP and NVIDIA are actively pursuing technology developments in VR and rendering that will likely be used for projects on Earth, as well as those further afield. HP is seeking to combine powerful computing with mobility in its newly launched backpack-mounted VR kit. “The challenges in VR are extreme, because you have all of that rich data that has always been complex to render — because of the density of the data and the computational cost — but now you have to do that in real time, at 90 frames per second, times two eyes,” Young noted.

For its part, NVIDIA is continuing to develop interactive, physically based rendering. “You get a predictable, accurate simulation of your CAD model instantly, which allows you to avoid surprises, catch errors early, and gives you the time to try out design modifications much more quickly,” Rink said. A new area under investigation is foveated rendering, which mimics our eyesight by providing high acuity in the center of the view, and less-sharp imagery around the edges. “This technique strives to ease the rendering workload by reducing the image resolution in your peripheral vision, in combination with eye tracking in the head-mounted display,” Rink explained. Although this does improve VR performance, it creates a less-than-ideal experience for viewers, with clunky peripheral rendering and a tunnel-vision effect. To address these problems, NVIDIA is developing contrast-preserving foveated rendering, which has a more realistic look. 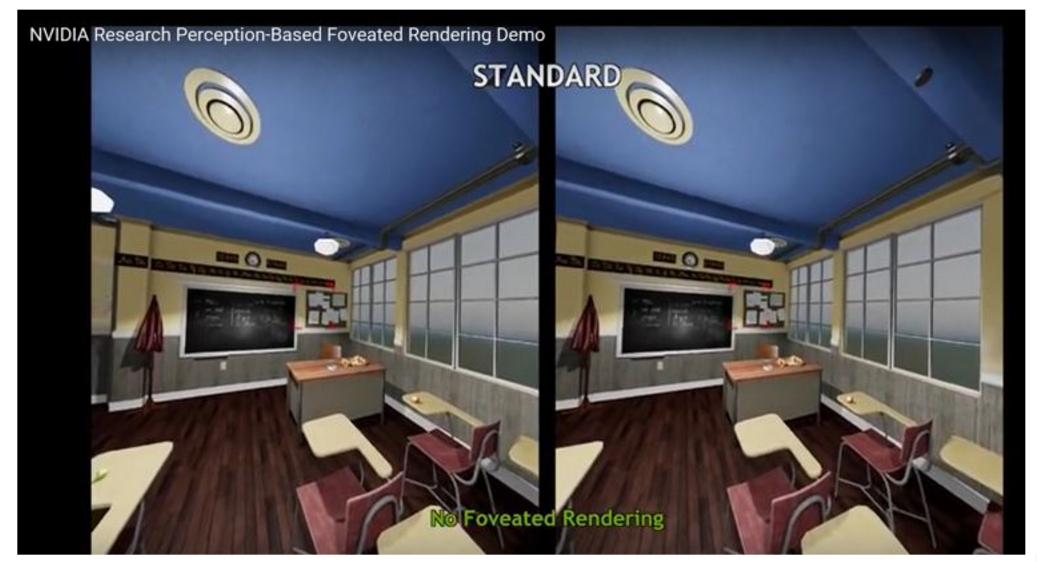 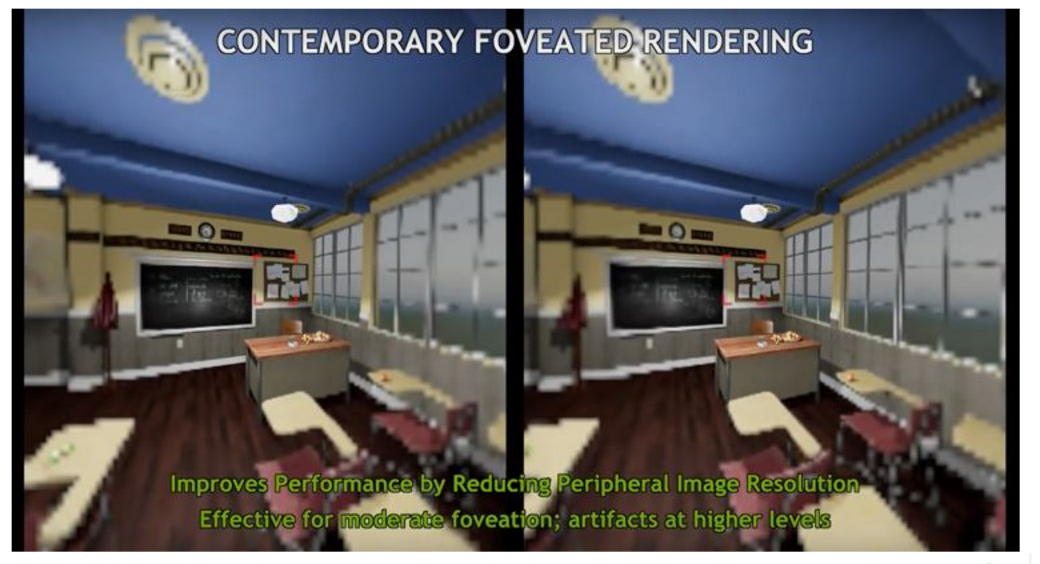 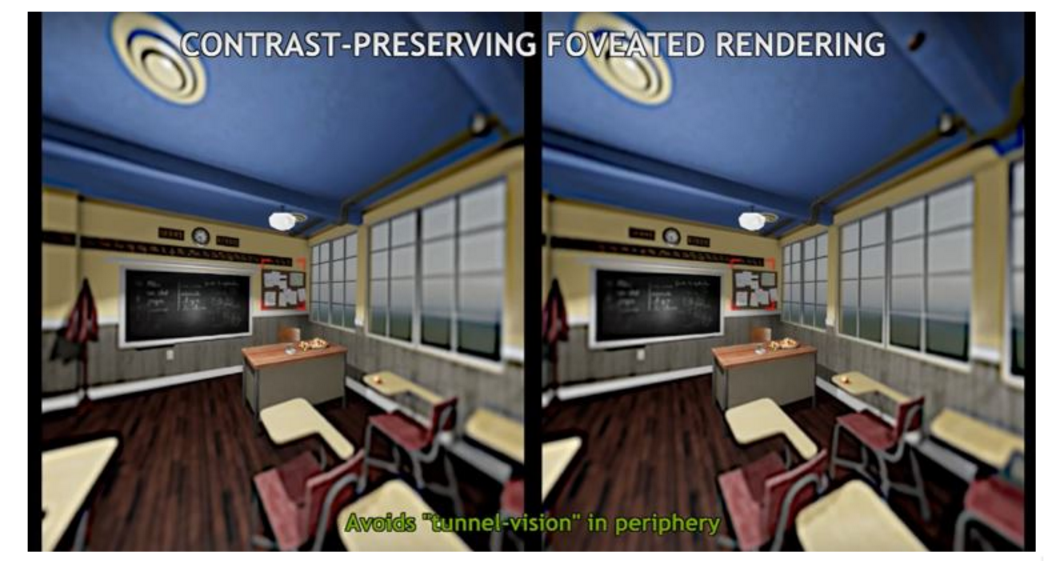 NVIDIA has also announced that it will launch Project Holodeck this year, with the goal of providing a photorealistic, collaborative VR environment. “It incorporates the feeling of real-world presence through sight, sound, and haptics,” said Rink. “For instance, you can feel the steering wheel when you grip it in VR.” The Holodeck beta is expected to open for registration in September.