Why would Hexagon Metrology, a company that specializes in making measuring devices, snatch up a 3D meshing software developer? Because modern metrological devices function more like scanners than yardsticks.

Hexagon owns and operates several brands instantly recognizable to designers, civil engineers, and surveyors. ROMER, one of its divisions, produces portable digitizing arms that let you capture the geometry of 3D objects (sculptures and scale models, for instance). On the other end of the spectrum, its hardware from Leica Geosystems lets you remotely capture large chunks of as-built data (a highway corridor or a historic church, for example). The scan sessions usually produce point-cloud data, or clusters of dots that represent the general shape of the target. An automatic surfacing and meshing software like Technodigit's 3DReshaper can turn the point clouds into a solid shape or a series of editable surfaces. 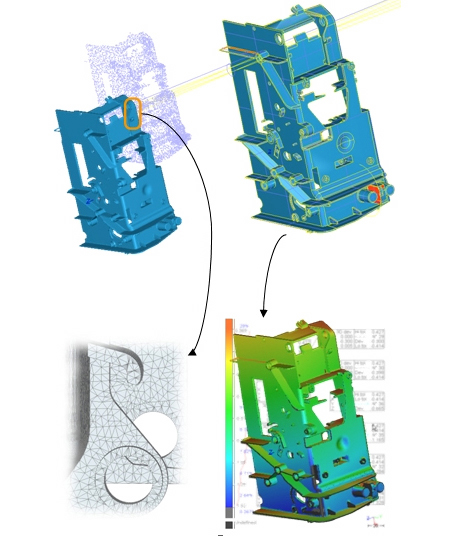 Technodigit's 3DReshaper software lets you import and edit the point-cloud data obtained by scanning devices, such as those from Hexagon Metrology.

Hexagon's acquisition of Technodigit this week promises an easier conversion of scan data into 3D objects, ready for manipulation in CAD and production in CAM. Ken Woodbine, president of Wilcox Associates, Hexagon's software development division, noted, "The 3DReshaper application is a fully-realized 3D package on its own, with powerful features like the ability to import point clouds of unlimited size, mesh shaping and editing, and 3D surface comparison for inspection. Many customers have been asking us for these kinds of capabilities. … Customers in the aerospace, medical, dental, surveying, automotive, power generation, and die and mold markets will appreciate the wide variety of capabilities that 3DReshaper brings to the table."

Woodbine's division Wilcox Associates is responsible for PC-DMIS, a software suite for controlling Hexagon's coordinate measurement machines. The software includes a series of direct CAD interfaces, linking it to standard packages like CATIA, Pro/E, and SolidWorks. It forms the foundation of what Wilcox Associates calls Enterprise Metrology Solutions.

Woodbine anticipated, "The core technologies and algorithms [of 3DReshaper] can be selectively incorporated into the PC-DMIS engine to create greater flexibility and functionality in our core software package, which is the de facto standard software for dimensional inspection at many of our worldwide customers."

For more on the use of point cloud data, read "A Surveyor's Norman Conquest" in the Jan/Feb 2009 issue of Cadalyst.