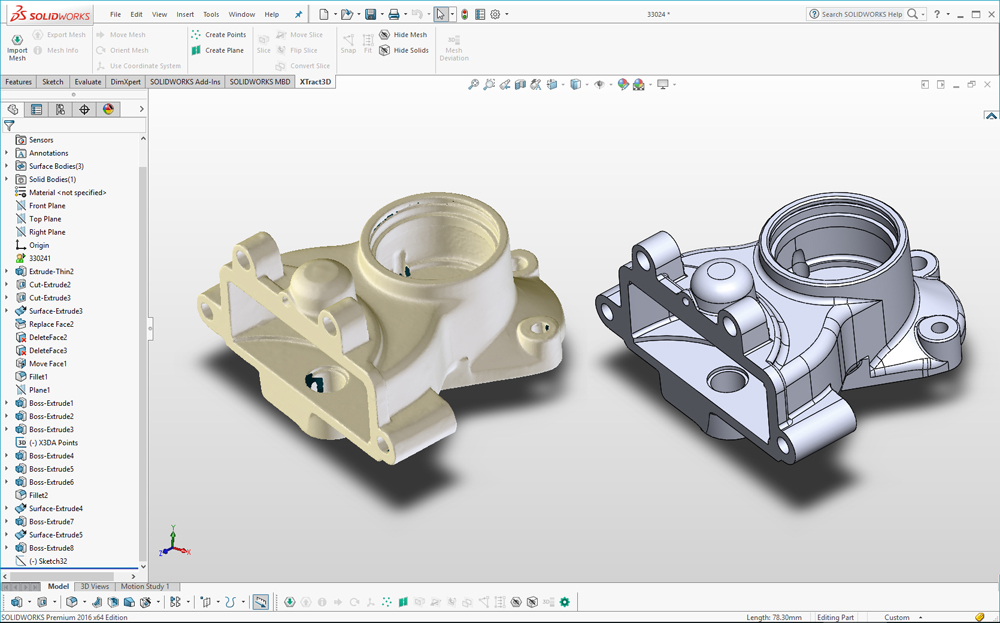 Polyga’s goal is to make it easier to reverse-engineer parts from 3D scan data, with a scan-to-CAD solution that is more affordable and less time consuming than existing options. “The use of scan data in SOLIDWORKS has traditionally been a really painful process,” said Polyga President Thomas Tong.

The Point of the Price Point

SOLIDWORKS has had its own scan data add-in, ScanTo3D, for a decade (it’s included in SOLIDWORKS Premium and SOLIDWORKS Professional). According to Tong, however, it’s an imperfect solution. “ScanTo3D doesn’t work particularly well,” he commented. “It’s one of those plugins that came out and then never got updated [sufficiently].”

The alternative was to use one or more third-party plugins or standalone packages. Tong maintains that this option was challenging, because it could cost users $10,000 or $20,000 — or more. “As of today, there’s really no cost-effective way to do reverse engineering in SOLIDWORKS,” he said.

In comparison, XTract3D is available for purchase as a lifetime single-user license at $2,999, or for rent at $499 for 30 days. (The company also offers a 3-day free trial.) These options are tailored to the two types of customers that Polyga sees in its market: Those that will use the product on a frequent basis, such as 3D scanning bureaus, can purchase the product outright, while the companies that only perform reverse engineering a couple of times per year can rent the product on an as-needed basis.

With XTract3D, users can import high-resolution 3D scan data directly for use in SOLIDWORKS, where they can use it as a reference while sketching CAD models and create editable solids and surfaces for feature-based modeling. Users can pull a cross section from the imported data and trace it, Tong explained: “We give you a 2D slice of a 3D model; you can draw on top of it, build your CAD model on top of it.”

XTract3D features support for part and assembly modes. Users can reverse-engineer an entire scanned part to replicate it or to bring a legacy part into their system, or they may reference scan data while designing related components. The latter scenario is more common than creating exact duplicates of real-world objects, Tong pointed out; one example is designing new housings that must integrate perfectly with existing electronics.

A Small But Serious Audience

Tong believes that only a small portion of the SOLIDWORKS user base needs reverse-engineering capabilities. “I imagine it’s in the single-digit percentage points … but those who need it, really need it,” he observed.

Thanks to his past role as owner of a 3D scanner manufacturing company, Tong has contacts worldwide among companies that perform reverse engineering. “A lot of them had a $20,000 package, but felt it wasn’t necessary,” he said. To help evaluate XTract3D, he sent beta copies to these companies. When about half of Tong’s beta testers abandoned their existing solution in favor of using XTract3D full-time, he knew he was getting somewhere.

As Tong sees it, there are two types of potential XTract3D customers. The first group includes those who wouldn’t be able to perform reverse engineering without it, because they lack the necessary tools and knowhow. “Without this plugin, they couldn’t do the work at all … they would have to jump through three or four different [software] packages,” he observed.

The second group is composed of reverse-engineering professionals who have mastered the technical aspects of the process, but who stand to save time by implementing XTract3D. Because XTract3D users can work natively in SOLIDWORKS, “you’re not doing the work twice,” said Tong. “You can bring [the scan data] directly into SOLIDWORKS, and create a parametric CAD model as if you were starting from scratch.”

Most existing solutions make STEP or IGES files to bring scan data into SOLIDWORKS, Tong explained, but that’s “not very useful” because those file types don’t preserve crucial elements such as relationships. Tong compared it to a file that’s been run through Google Translate — much of the necessary information is still there, but it requires a lot of additional work after the fact.

Tong believes that most of Polyga’s reverse-engineering customers stand to cut their reverse-engineering time in half with XTract3D. For a few, that savings can be much greater. Tong recalled the experience of a company that had to scan the bottom of a train for the London Underground two or three years ago; it took about two months of work to create the STEP file and import it. “If they had had our plugin [at that time], it would take them about 15 minutes,” said Tong.

In addition to faster operation, training time is also reduced with XTract3D, said Tong. “Traditionally, learning to do reverse engineering from scan-to-CAD data took about a week; we get that down to 10 to 15 minutes,” he said.

Tong doesn’t expect XTract3D will put scanning service bureaus out of business. Not everyone wants to make the investment in the necessary hardware, or in the travel required to do onsite scanning. “There’s lot of value to have somebody who’s good at the motions of 3D scanning,” he said.

But after implementing this tool, more companies may choose to outsource only the collection of scan data, and not have bureaus convert that data to CAD. As Tong put it, “Why pay someone else to do what you already know how to do?”