Peter Simmons donated the Fontaine de Tourny in 2007 to commemorate the 400th anniversary of the foundation of the city of Quebec. Imported piece by piece, restored, and assembled, this fountain stands in front of the Parliament of Quebec and is 13 feet at its widest point and 23 feet tall. Little could Simmons have realized that in the fountain’s grand stature and embellishments lay a 3D scanning challenge.

For its Handyscan 3D annual scanning contest, Creaform, a provider of 3D scanning products, challenged its employees to scan an object that related to the company's chosen "Four Elements" theme. In teams of three or four, the employees carried out an original 3D scanning project using the REVscan laser scanner from the Handyscan 3D lineup.

Using the theme of water, one Creaform team chose to scan the Fontaine de Tourny. 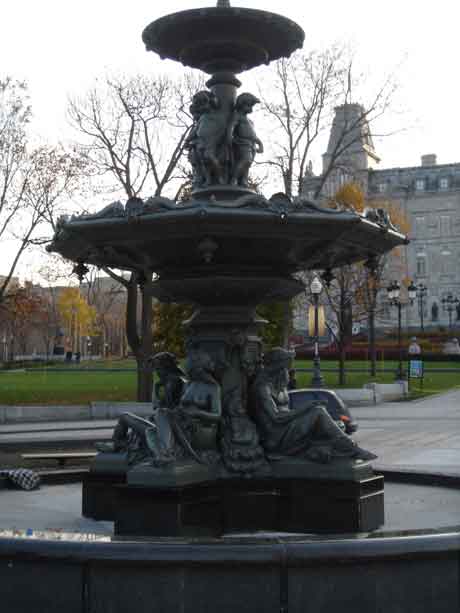 "The project required a durable scanner that could adapt to changing environmental conditions, a scanner that could scan large patches of data quickly, and also allow us to scan hard-to-reach places," said Nicholas Bourque, team leader and sales director for Creaform North America. "Most importantly this had to be done with a system with a quick learning curve." The competition rules restricted just one application specialist per team, which gave Bourque's team a 1:4 expert ratio.

For a project of this magnitude, the team turned to REVscan, the company's first self-positioning and portable laser scanner.

How It Works
A 3D laser scanner sends trillions of light photons toward an object and receives only a small percentage of those photons back via the optics used. This acquires the x, y, and z coordinates of millions of points on the object and produces a picture describing the distance information of each point. This data in turn creates a digital 3D model of the object.

With a large surface to scan and little time to work, the team used two scanners to reduce scanning time and meet their deadline. The city granted the team less than 24 hours of access to the fountain, from 5 p.m. to 2 p.m. 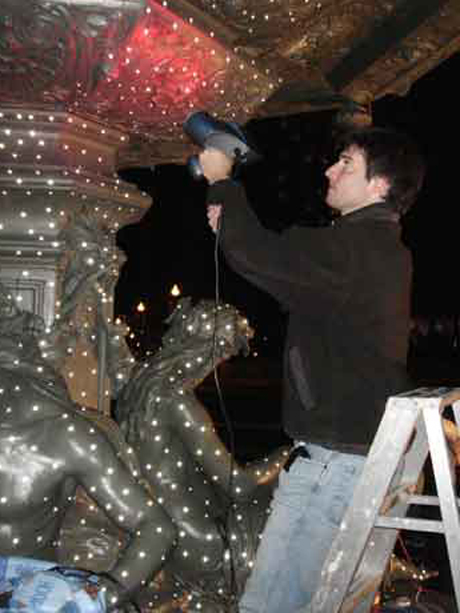 3D laser scanners send trillions of light photons toward an object and receive only a small percentage of them back. With these photons, a 3D model is built.

Scanning Setbacks
For the team members, this was a far-reaching project. Once they received authorization from the city, the team took on the technical details. Because the fountain is located in the heart of a busy traffic circle, it was decided that the operation would be conducted at night. It was also necessary to cut the fountain's water supply to dry the basins before scanning.

The team also faced logistical problems because of the fountain's considerable size. The base of the fountain consists of four large human statues, which are grouped around an octagonal pedestal mounted on a basin. In addition, the basin, adorned with masks, marine features, and fish, has four child figures rising from it. "Many areas blocked access to other detailed areas that would have been impossible to scan with a large-volume scanner or a white-light scanner because of the quantity of blind spots that would have been created," Bourque explained. "There were simply too many nooks and crannies for it to be efficient with a stationary digitizing system."

Because of the fountain's large diameter and height, it was imperative to find a way to reach the top statues and basins. The team determined that a ladder would not be a suitable option; they decided, instead, on renting a hydraulic platform. Scanning 20 feet in the air proved challenging, but not impossible. "This was very unstable and constantly shaking. Using a scanner with an external tracking system would have been difficult," Bourque said.

On that cold night, the team scanned the whole surface of the fountain, including the eight statues, the water basins, and the embellishments. Once the reference system was recognized by the data-acquisition software VxScan, the team was able to scan sections of the fountain simultaneously using the two scanners.

Freezing rain put a damper on the team's scanning progress around 4 a.m. The team reacted quickly, setting up tarps around the fountain. "This radically limited our working space. However, not once did this affect the scanners. They just kept on scanning," Bourque said.

Scanning Success
Later that morning, the rain stopped and the sun came out, altering the lighting conditions once again. But the light adjustment parameters of the scanner enabled the team to adjust for the light change without having to build a black box environment. The team was able to finish the scanning process before deadline, completing it in 19 hours.

Once the digital data was collected, the team set about the post-treatment process, which was long, Bourque remarked. "But the fact that we worked with STL files rather than point clouds extremely simplified it. Because of the high number of scans, point clouds would have been difficult to stitch together. The STL limited the time it would have required to eliminate the overlap in point cloud."

Fashionable Fountain
A few months after the scan was complete, Charles-Oliver Roy, owner of the Quebec jewelry store Artisans du Passage, heard about the scanning project carried out by Creaform. Roy contacted the company to propose using the digital files of the fountain to create jewelry pieces. 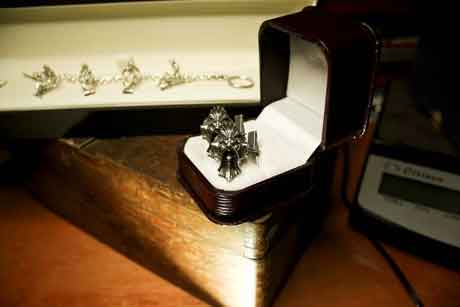 Roy used the digital files to tool miniature replicas of the fountain's statues in precious metal, including silver sleeve buttons and a gold charm bracelet.

Peter Simmons, the fountain's donor, is also considering using the scan data to manufacture miniatures of the fountain, Creaform reports.

"Looking back, it was quite the challenge," said Bourque. "We survived a sleepless night, freezing rain and wind, and blinding sun the next morning. The scanners worked perfectly and proved absolutely reliable, and we were able to capture all the data we needed in order to deliver a fine project, which would prove useful in a way that, frankly, we never quite expected!"