GIS E-Book Serves as Guidebook to the Future

ESRI's latest collection of essays explores the application of GIS to an array of challenges, as well as the ongoing evolution of the technology.


Last July, ESRI — a developer of GIS (geographic information system) software — added Essays on Geography and GIS: Volume 2 to its "Best Practices" series of e-books. The PDF, which can be downloaded from ESRI's website at no charge, compiles a dozen articles from recent issues of the company's ArcNews magazine. If history is any guide, Volume 2 is likely to be popular; ESRI claims that more than 30,000 people viewed the previous volume over the past year. 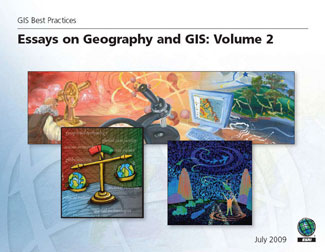 Unlike many corporate giants, ESRI is determined to promote the use of its products for the common good. Under the leadership of President Jack Dangermond, a staunch standard-bearer for the technology, the company has long championed the use of GIS to mitigate the gamut of problems facing humanity.

Although this mission could be dismissed as merely good marketing, there's more to it than that. Every human struggle — to stop the spread of an epidemic, to save an endangered species, to live in peace with our neighbors — benefits from better comprehension of the problem at hand. As the introduction to Volume 2 states, "By understanding geography and people's relationship to location, we can make informed decisions about the way we live on our planet."

Volume 2 opens with Jack Dangermond's argument for crafting our built environment in accord with the natural environment. AEC professionals will likely find "GIS: Designing Our Future" to be the most intriguing essay of the group: "GeoDesign brings geographic analysis into the design process, where initial design sketches are instantly vetted for suitability against a myriad of database layers describing a variety of physical and social factors for the spatial extent of the project." (For further discussion of Dangermond's article, see the September 16 issue of GIS Tech News.)

Civil engineers will also be interested in "Transport 2.0: Meeting Grand Challenges with GIScience" by Harvey J. Miller. There's no question that the modern era exerts unprecedented pressures on transportation networks, with complications ranging from a ballooning population to terrorist attacks. As Miller notes, "While in the past the strategy for managing transportation demand was simply to build more infrastructure, we are facing severe financial, environmental, and social constraints to expanding infrastructure." He believes that GIS technology offers — or will eventually offer — valuable tools to overcome transportation roadblocks, such as "mirror worlds": real-time, virtual representations of complex, real-world systems.

Paul M. Torrens also touches on the connection between virtual worlds and GIS in his article, "Process Models and Next-Generation Geographic Information Technology." Torrens examines the development of process models in the geographic information sciences and the technologies that have shaped them, observing, "As process models are embedded in larger information, technical, or even sociotechnical systems, issues of accuracy, error, and error propagation in GIS become even more significant."

In "Implementing Geographic Information Technologies Ethically," Harlan J. Onsrud discusses a common topic — control of information resources for privacy and revenue purposes — from an uncommon perspective. Onsrud opines that legal means of exerting that control are not well suited to rapidly changing technologies and social conditions. Instead of choosing law as our primary guide for geospatial design and implementation decisions, he argues, we should rely on ethical values. "Not only is this the right thing to do, but geospatial technology designs and information system implementations that are morally defensible are also far more likely to be mutually supported internationally by governments and to survive and thrive in the long term within the global marketplace."

"GIScience for Human Rights," by Doug Richardson, is also concerned with "the right thing to do" — specifically, the efforts of the AAG (Association of American Geographers) to help create a Science and Human Rights Coalition, develop an AAG Geography and Human Rights Clearinghouse, and support an American Association for the Advancement of Science project on geospatial technologies and human rights. This project includes monitoring and documentation in such remote, strife-torn regions as Darfur, Burma, and the Ogaden region of Ethiopia.

Richardson also writes on the little-explored connection between "Geography, GIS, and Mental Health," as well as "Geography Education and GIS Professional Development." In the latter, he cites studies that indicate "employer organizations across a broad swath of the business, government, and nonprofit (BGN) sectors seek individuals who are able to think spatially and use geographic technologies to collect, integrate, and analyze data on social and natural systems." It would seem that geographic education is a smart choice, even in difficult economic times.

Education is a recurring theme in the collection; Daniel C. Edelson contributes two "Geo Learning" columns, "Geographic Literacy in U.S. by 2025" and "Get Involved with Geo-Education Reform." The former stresses the importance of instilling basic geographic knowledge and analysis skills in Americans, a people infamous for their geographical vacuity; the latter urges GIS professionals and other applied geographers to take responsibility for remedying this sorry state of affairs.

The three remaining essays focus on the voices of geographic organizations, and their role in shaping technologies and polices. In "The National Geospatial Advisory Committee: An Action Agenda," Anne Hale Miglarese explains the mission, recommendations, and long-term agenda of the NGAC: "by formally establishing this [committee] the federal government can now receive formal advice and recommendations from representatives of state, local, regional, and tribal governments, as well as academia and the private sector."

In "Global Dialogues: GIScience and Sustainable Development in Africa," Doug Richardson reports on discussions sponsored by the U.S. Department of State's Global Dialogues on Emerging Science and Technology (GDEST) program. "Follow-on activities and continuing interactions resulting from these dialogues have the potential to generate considerable ongoing and longterm cooperation among African and U.S. scientists in geographic research, geographic information science (GIScience) education and GIS applications, sustainability science, and many related fields."

Finally, in "Changing the Face of Geography: GIS and the IGU," Roger F. Tomlinson discusses the evolution of the IGU (International Geographical Union) and its role in developing GIS technology. "In short, the IGU was the organization that nourished the growth of GIS and let it be a coherent part of geography for the benefit of the discipline as a whole."