According to Garden to Table's Lewis, efficiency and accuracy in the tree-mapping portion of the project improved immediately. Compared to pen-and-paper, the crews gathered tree data much more quickly in the field, and errors in transcription were eliminated by digital upload to the database.

"With the mobile solution, we mapped 1,400 trees and did that in roughly 160 hours," said Lewis, noting this represented almost 50% more trees mapped in half the number of hours, and in only four weeks compared with 18 months the previous time.

Participants believe the most significant advantage of the automated solution will come this year with a boost in harvest productivity. Running the Cengea data analysis and visualization application on the GIS, Garden to Table will query the tree inventory to show the most productive trees of a specific type on the digital parcel map layer. This will help them concentrate the volunteers in neighborhoods where the most fruit can be picked.

Further, the Cengea application contains background information on fruit tree species including peak production times which could be correlated with specific tree locations by street address on the parcel layer. Each week of traditional harvest times, Lewis will generate custom maps of the project area along with address lists showing his teams exactly where to go and glean fruits ready to pick.

"The application revolutionizes the way we are able to look at our tree data," said Lewis.

Among the attributes collected during field work were condition and health of the trees. As a favor to participating citizens with fruit trees on their properties, Garden to Table will also create customized pruning schedules by species. Volunteers may use this information to notify the owners when their trees should be tended. The charitable organization hopes that better maintenance will improve yields in the future.

The City of San Jose and Garden to Table share a common long-term goal of increasing the total number of trees in the San Jose area. While both organizations understand that more fruit trees will ultimately yield larger harvests, the university is eying a classic win–win situation for the community at large.

The concept of urban forestry dovetails perfectly with a green initiative started by the San Jose mayor in 2009. One of its goals is to plant 100,000 new trees across the city. SJSU's Nixon explained that a rich tree canopy in the urban and suburban setting has a positive impact on the local economy, environment, and society. Trees boost property values, reduce air pollution, improve storm water drainage, and even encourage people to exercise more outdoors.

With fruit tree canopy inventory and monitoring in mind, the project team turned to Equinox Analytics to add another component to the solution. Working with the Trimble eCognition software, the firm created a script that calculates fruit tree canopy coverage by analyzing high-resolution aerial orthoimagery and airborne LiDAR (light detection and ranging) elevation data that had been acquired over San Jose and provided by the City to Trimble for the project. 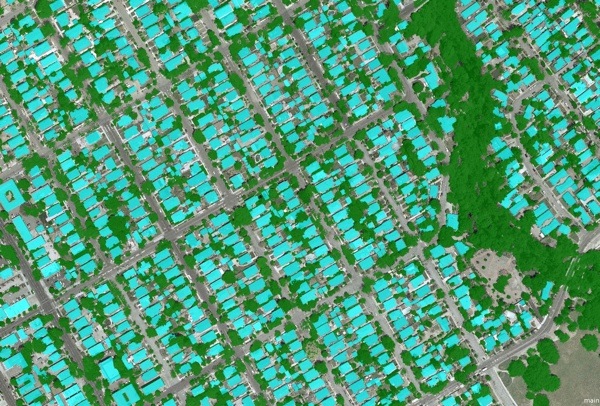 
First, the eCognition script identified areas of vegetation in the digital orthoimagery using information from the visible green spectrum. But this spectral information included all green vegetation: tree canopies, grass, and bushes. To separate out the trees, the script then correlated the visible green spectral class with the elevation points in the LiDAR data, eliminating vegetation shorter than five feet in height.

"This allowed us to calculate total tree canopy coverage in the [Garden to Table] project area," said Aaron Smith, Equinox Analytics president. "We refined the analysis to focus on trees [with fruit] accessible by ladder, so the script eliminated trees taller than 25 feet."

Smith output the tree data as a georeferenced profile across the project area and provided this file to SJSU and Garden to Table. Nixon and Lewis hope to input the data into the GIS and cross-reference known fruit tree locations with the canopy profile. From this information, they expect to more accurately measure the size of specific tree canopies, greatly enhancing their estimates of potential fruit production.

"The profile also showed where the tree canopy was particularly dense in other parts of the city, giving them an idea of where to focus their efforts to find fruit trees that hadn't been mapped," said Smith.

Lewis said that Garden to Table will use the fruit tree canopy map in the future as it moves into the next phase of its project — encouraging the planting of new fruit trees. Just as the canopy map shows where the trees are concentrated, it also reveals gaps where new ones would thrive. Nixon and Lewis plan to work with both city officials and private landowners to encourage planting trees where they can provide the most benefit.

Trimble's Gosalvez sees the tree canopy monitoring piece of the solution as having significant long-term benefits for overall urban forestry/agriculture efforts in any city. The application provides a baseline of canopy coverage and then enables the end users to make rapid change detection measurements in the future to assess the success of policy initiatives designed to foster tree growth.

"This integrated solution provides all the tools needed for communities to beautify their environments, battle food insecurity, and support healthier living in the face of a changing climate," said Gosalvez.

About the Author: Kevin Corbley