Drinking water flows again to 17 million thanks to quick action and a suite of applications from Bentley Systems.


Last month, infrastructure solutions provider Bentley Systems welcomed a group of its software users to the Be Inspired: Infrastructure Best Practices Symposium and Awards in Charlotte, North Carolina. The event included keynote addresses and updates about acquisitions and product innovations, but the real draw was the attendees themselves. The finalists of the 2009 Be Inspired Awards gave presentations describing the methods used to execute their projects — and the challenges they encountered along the way.

Creating a digital city map, designing a stadium, or expanding an airport is never a single-dimensional task. Projects on this scale can be complicated by a variety of obstacles: geological, financial, environmental, or even political. Earlier this year, the Water Supply and Sanitation Department of Maharashtra, India — winner of the Innovation in Water, Wastewater, and Stormwater Networks award — faced a water supply problem so severe that it spawned civil unrest in 13 municipalities.

Madhuri Mulay, deputy engineer for the department (known as Maharashtra Jeevan Pradhikaran [MJP]), explained that the problem stemmed from a Supreme Court ruling that restricted the distribution of water from the Krishna River, the main water source for 17 million people in the Mumbai metropolitan area. Although the water restriction was intended to last for only one day per week, the downstream network of pipelines and storage tanks took an unexpectedly long time to refill after the dam was reopened. Some cities did not receive water for an additional 30 hours.

There is a long history of riparian disputes in the Krishna Basin. The two other states the Krishna passes through on its way to the Bay of Bengal — Karnataka and Andhra Pradesh — are located in deficit basins. "Therefore," said Mulay, "water is most precious in these two states. People in these states are very alert [about] their water share." 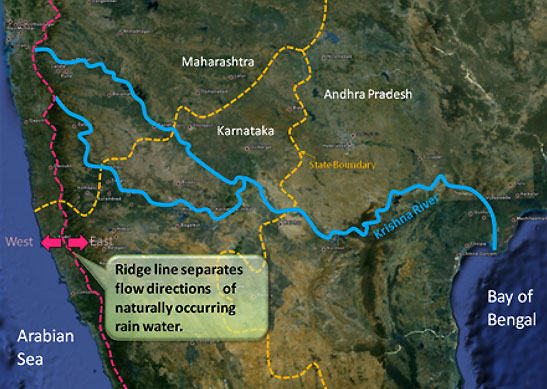 The Krishna River supplies water to the Indian states of Maharashtra, Karnataka, and Andhra Pradesh. Image courtesy of the Government of Maharashtra, Water Supply and Sanitation Department.

The construction of three hydroelectric plants brought the friction between Maharashtra and its neighboring states to a head, and the dispute was taken to the Supreme Court. The court limited the amount of water allotted to Maharashtra, restricting the amount of water from the Ulhas River (a tributary of the Krishna) that could be released through the hydroelectric station at Bhivpuri. 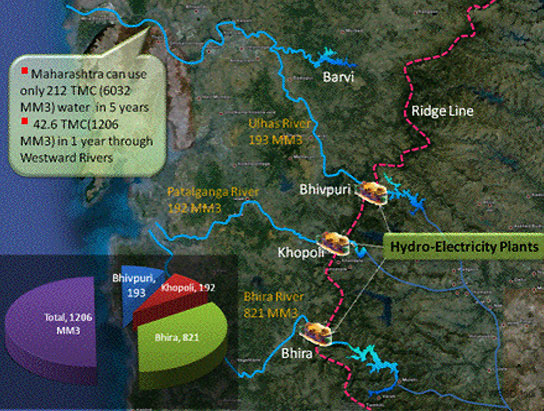 After a Supreme Court decision limited the state of Maharashtra to 212 thousand million cubic feet (TMC) in five years, officials decided to stop the flow of water through the Bhivpuri dam on each Friday, and restore it each Saturday. Image courtesy of the Government of Maharashtra, Water Supply and Sanitation Department.

The media quickly reacted to the water cut, highlighting the problem in both print and television coverage. Angry protesters held demonstrations, and in some cases, vandalized property.

The principal secretary of the Water Supply and Sanitation Department referred the increasingly controversial issue to the member secretary of MJP. Mulay described the department's approach: "We thought that only the model in Bentley Water and WaterGEMS could provide us with a solution to solve this burning problem. . . . We studied the entire pipe network. We adopted the strategy to simulate scenarios of the actual crisis condition and possible solutions. Our objective was to re-engineer a pipe network that would serve reliably, safely, and efficiently."

Although it wasn't until after the restriction ruling that the department started work on the model, MJP staff had a head start because a model of the region's pipe network was already available. The existing hydraulic model had been created in response to the devastating Maharashtra floods of 2005. "We quickly made changes in that model, and the new model to tackle this crisis was prepared within a period of one week," Mulay explained. "Our hydraulic model gave immediate understanding of the water infrastructure. It helped us to make knowledge-based decisions."

Pipelines, landmarks, and other features were digitized for the model using Bentley Map and Bentley Water. Satellite images with a resolution of 0.6 meter were incorporated as well. 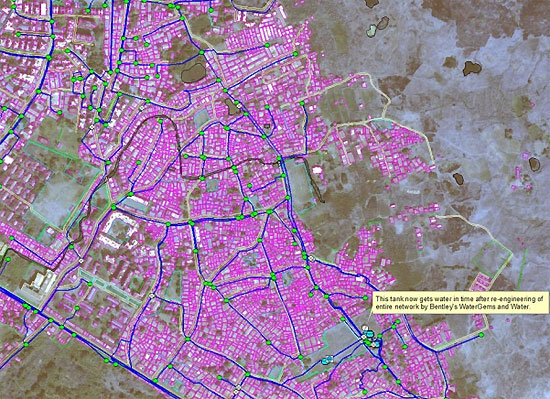 A GIS map of the pipe network. The indicated tank now gets water in time, thanks to a re-engineering of the network. Image courtesy of the Government of Maharashtra, Water Supply and Sanitation Department.

The entire pipe network of the Mumbai metropolitan area was simulated in Bentley Water and then exported to WaterGEMS for hydraulic modeling, Mulay reported. After basic data entry, MJP created three scenarios: normal water supply, a simulation of the situation after a one-day water restriction, and a simulated solution to the problem.

Through studying the model, MJP staff observed that low-lying areas were drawing more water than necessary, thus slowing the flow to the end of the network. "[It may appear] that this is simple hydraulics and [the solution] could have been provided without modeling," Mulay noted. "Here, we must say that when the crisis started nobody could comprehend this; we were all very perplexed." It was only after MJP prepared the simulation, color-coding the computed pressures at every node (green for positive pressure, red for negative), that the engineers identified negative pressures at some nodes, indicating that water wasn't reaching those locations. 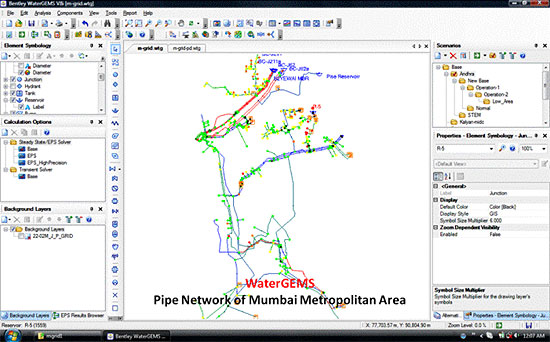 "In a normal scenario," said Mulay, "the valves here were controlled. But when the one-day cut was imposed, people took the law into their own hands, and all the valves were kept 100% open. This disturbed the hydraulics of the downstream part of the network." Once the source of the problem was identified, MJP used programmable controls in WaterGEMS to decrease the flow from valves in low-lying areas, thereby solving the flow delay without compromising anyone's water needs.

According to Mulay, refining the solution in the software was very beneficial: "The same exercise could have caused many problems in the field, as that exercise would have been carried out haphazardly. . . . We needed to do a few trials to control the flows by setting the valves (i.e., setting our dynamic controls in our model) at low-lying areas to avoid excess withdrawal."

The re-engineering solution dramatically decreased the amount of time required to refill the network after the dam was reopened each week. According to Mulay, "Earlier, before implementation of our project, water was not reaching many cities at the tail end of the system once the water was resumed on Saturday. It took 14 hours just to fill the empty pipelines, and after that 30 hours were required to fill the storage tanks. Our work has saved the crucial time lag of this 30 hours. The value of this savings cannot be measured, as it concerns the life sustenance of millions of people."

The government was understandably appreciative of MJP's solution, which eliminated the need for the thousands of tanker trucks that would be required to supply the populace each week in the absence of a functional pipe network. "Most importantly, it avoided the law-and-order problem in the region," Mulay said. "We satisfied the common people, and as a result, now all people get water in time."

As for those who may find themselves in a similar situation someday, she advised them to study potential crises now. "Create a hydraulic model and assess the threats and vulnerabilities to water utilities, and find solutions in advance."