AirportlinkM7 is Australia's largest privately funded transport infrastructure project. The massive tunnel stretches more than six kilometers, carrying a multilane toll road under the heart of Brisbane, capital of Queensland, Australia. The engineering firm Thiess set new benchmarks in its construction, most notably in its use of GIS technology from partners and GIS specialist Esri Australia.

According to David Jaunay, a project GIS manager for Thiess, the company's GIS-centric approach made the job easier for the company's 4,500 staff members. "The simple layering capability and visual nature of GIS technology facilitates better decision-making," Jaunay said. "Once Thiess's staff became familiar with its advantages, usage went through the roof, with the central web-based viewer receiving up to 350 visits each day."

Jaunay cited one example where the technology delivered savings of more than $3 million. "Using GIS technology, we can analyze all the data pertaining to the project and its implications, and establish irrefutable evidence that empowers our team to make better operational decisions.

"For instance, we released modeling prior to construction on the impact that soil settlement above the tunnel would have on utility assets in the area. From this modeling, a utility owner identified a number of areas where settlement tolerance levels would be approached or exceeded, requiring potential asset relocation costs of around $4 million — for which the project would have been liable. 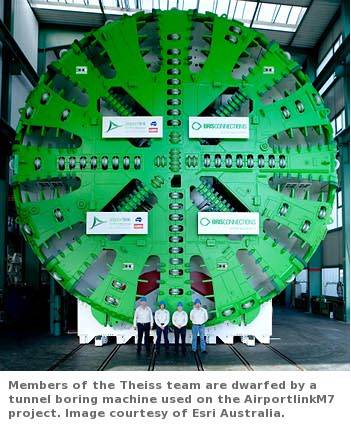 "Using GIS technology, we were able to take accurate measurements of actual soil settlement — collected by sensors placed along the site during the project — and overlay it on a map of utility asset data. By viewing data in this geographic context, we could clearly identify the original modeling had been too conservative in terms of protecting assets, and that the actual settlement was substantially less than anticipated.

"From this we were able to provide evidence that reduced the utility's claim by 80 percent, saving Thiess more than $3 million dollars — a considerable return on our GIS technology investment."

Esri Australia GIS in Engineering specialist Peter Wilmot noted that in addition to this significant cost reduction, GIS technology played an essential role across every aspect of the Airportlink M7 project.

"Thiess expanded on their GIS integration experience from Victoria's Eastlink and M80 projects, with the technology being used across teams, from executive management to safety, community, and construction," Wilmot said. "In the AirportLink M7 project, Thiess once again has set a new engineering benchmark in Australia, significantly improving business and project communications to achieve genuine time and cost savings."

Jaunay said that although the AirportlinkM7 tunnel set a benchmark for both scale and ingenuity in the use of GIS technology in Australia, Thiess is still striving for greater integration. "Senior managers at Thiess understand the technology can generate savings far beyond the cost of implementation," Jaunay said. "We are continuing to refine our implementation of GIS technology and are now incorporating it in the tender stage to deliver an even greater competitive advantage."

About the Author: Alicia Kouparitsas