Intensifying battles between rival smartphone providers spawn a bevy of geospatial and mapping applications that benefit consumers and professionals alike.


As the Apple iPhone and other smartphones begin to fend off challenges from the market's newest player — the Droid from Motorola, Verizon, and Google — consumers are seeing a burgeoning market of mobile phone applications. Hardware vendors and mobile service providers are peddling more attractive built-in apps to lure consumers to their respective platform, and software developers are scurrying to fill niches for new add-ons. In addition to generic contact management, e-mail, and Web browsing, new apps are adding location-based services to provide more technical capabilities.

Geographic information systems (GIS) professionals are among those affected by this trend, with new capabilities available at their fingertips. Although early GIS-related smartphone apps were mainly geared toward a broad consumer market, professional uses are expanding.

LBS Wireless, a software developer with offices in Sydney, Australia, and Malibu, California, recently introduced Field Assets, an iPhone/iPod touch tool that enables mobile workers to collect data on assets such as roads and utilities. The app uses the device's GPS capabilities to verify locations, and allows users to enter information such as photographs, voice recordings, and free-form text. Data can be wirelessly exported in real time via peer-to-peer Bluetooth connectivity, e-mail, Twitter, and web site uploads. According to the company, a Droid version is forthcoming.

Oakland, California–based Integrity Logic has released a series of iPhone/iPod–based apps that display the geography and geology of various states, with multiple layers of information that can be superimposed, mixed, and rearranged. Geology MT, for example, was recently released for the state of Montana. "We keep getting surprised by how these apps are used in the field," said Max Tardiveau, founder of Integrity Logic. "We recently heard from a user who uses the wildfire layer to hunt for mushrooms in Colorado. Apparently, morels grow best right after a fire." 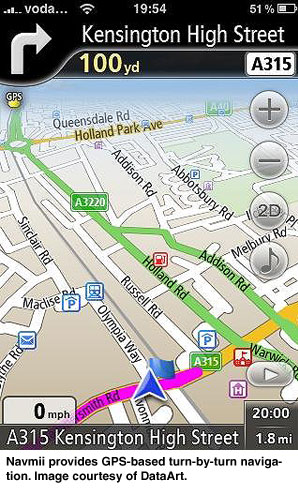 GIS professionals can also benefit from consumer-oriented tools. Navmii, a navigation application from London-based GeoLife that was previously developed for Windows Mobile devices, was recently released for the iPhone and iPod touch. The app uses GPS to provide smart routing, interactive maps, and spoken directions for turn-by-turn navigation. While similar applications were previously available for the iPhone, GeoLife claims Navmii is the first to bring GPS navigation to the iPod touch. Navmii is currently available for the United Kingdom, and will be available for the United States later this winter.

GeoLife's software partner, New York City–based DataArt, helped develop the technology that combined GeoLife's Navmii engine with PosiMotion's G-Fi mobile network and GPS router. The solution uses GPS, Wi-Fi, and cellular telephone technology to establish positioning in a wider range of situations, said Dmitry Bagrov, DataArt's senior vice-president. "At any given moment, you can request the position of your phone," he said, noting that the combination of technologies enables users to dependably find that position even within buildings, unlike conventional GPS.

WHERE, introduced in 2007 by Boston, Massachusetts–based uLocate, was one of the first iPhone apps to use GPS and Wi-Fi to pinpoint a user's location and provide search results nearby. Users can find restaurants, gas stations, and other local points of interest, as well as monitor weather and traffic conditions in real time. WHERE is also available for the Droid, BlackBerry, and Palm platforms. The key draw is that "it gives businesses the ability to connect with an audience," said uLocate vice-president Dan Gilmartin.

ESRI is also expanding its mobile offerings. The Redlands, California company has previously focused on Windows Mobile devices for its ArcGIS Mobile and ArcPad products, but is currently developing iPhone solutions to access maps from ArcGIS Online and ArcGIS Server. An iPhone SDK will likely be available in mid-2010, and an out-of-the box solution will be available shortly thereafter, said Jennifer Jacob, product marketing manager for mobile GIS products. 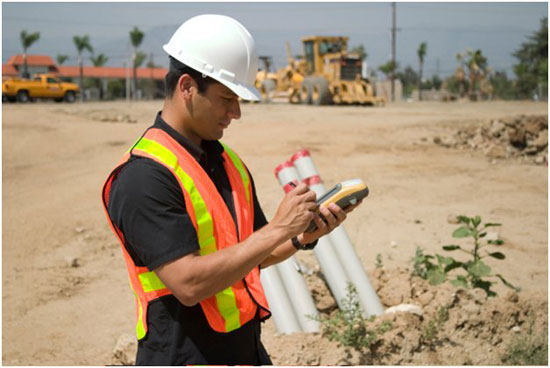 ESRI's ArcGIS Mobile, a Windows Mobile–based product, may soon be joined by an iPhone app that accesses maps on ArcGIS Server. Image courtesy of ESRI.

Sketching on the Go 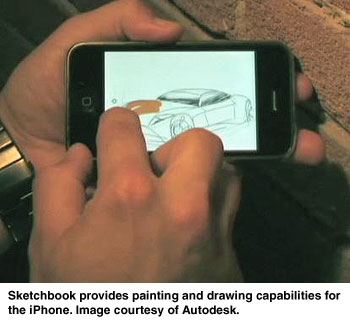 CAD-like products may even be part of the mix. Earlier this year, Autodesk introduced Sketchbook Mobile, a painting and drawing app for the iPhone and iPod touch. It uses the same engine as Autodesk's SketchBook Pro desktop application. Digital pencils, pens, markers, and airbrushes enable users to create quick sketches in the field, and refine their ideas later in SketchBook Pro. Like most other iPhone apps, SketchBook Mobile is available from the Apple App Store. A free express version is also available. The company would not comment on whether other iPhone apps may be in the works.

Many other GIS apps are also available from the iTunes store. Enter "GIS" or other relevant terms in the Search field, then click on Applications to narrow the search results.

Mobile apps will likely never match the functionality and accuracy of their desktop counterparts. However, the expanding mobile options are definitely opening up new possibilities for workers equipped with the right phone.