When Google introduced an online 3D world into which anyone could insert models of buildings and physical structures, municipal governments and utilities grew excited at the prospect of one day visualizing and analyzing their construction proposals and urban changes in real-world contexts. Geospatial and urban design professionals began to imagine the next steps beyond mass consumer applications, such as digital cities -- fully interactive, information-rich urban models that could support analysis and simulation in urban environments. Google Earth and Microsoft Virtual Earth successfully moved the industry away from thinking that digital cities were unattainable. Today, municipalities and utilities actively seek technologies and services that can help them visualize, analyze, and communicate proposed changes to their assets and urban environments within real-world contexts.

With expertise in geospatial, architectural, and engineering design software, Autodesk found itself staring at an emerging gap between customer expectations and available technology. Autodesk customers and partners suggested that the company should take a leading role in delivering an off-the-shelf urban design product. Autodesk investigated customers needs by partnering with several cities to test early urban design technology and contribute requirements and ideas for Autodesk urban design products. With the help of the Centre for Geomatics at Salzburg University (Z_GIS), Autodesk approached the city of Salzburg, Austria, proposing a research pilot project to explore the requirements and ecosystem that would support the use of urban design technology by the city. Salzburg eagerly agreed to participate.

Pilot Project
Salzburg is an excellent example of a European municipality that is experiencing economic expansion while supporting a stable population base. Citizens actively participate in the urban design process because they are concerned about preserving historic city views and conserving natural resources and green space. In some cases, urban development projects in Salzburg take years to approve because of the unavailability of standard tools for sharing information and visualization for design proposals. Over the past 25 years, the city government explored a range of technologies to more easily communicate change to affected citizen, business, and government stakeholders.

Unfortunately, most of the tools and technologies in the market required extensive investment in training and expert staff or necessitated outsourcing work to visualization consultants. Like many cities, Salzburg typically found itself unable to have ownership or control over the data or composition of visuals used during the urban design process. Salzburg experiences the typical limitations of modern urban design workflows in which valuable geospatial and asset information resources remain isolated and cannot be integrated into a single urban information space.

The Salzburg Digital Cities Research Pilot began in May 2008 and has progressed as a collaborative effort between the city, Z_GIS, and Autodesk. Autodesk and Z_GIS staff conducted requirements interviews that fed into early versions of urban design tools that were then brought to the city for feedback. The pilot teams focused on identifying urban design workflows that cross departmental and organizational boundaries, aggregating data from a variety of city and state sources to form a starting point for modeling the city and exploring tools that might fit into the local urban design workflow. The teams have discussed, examined, and tested technologies from diverse industries including media and entertainment, geospatial, and architecture to fill in the likely workflow steps for Salzburg to establish a repeatable urban design process. For example, the team collected photographic data of two landmark Salzburg buildings, then processed the photography using Autodesk ImageModeler to generate digital models for use in a 3D city model. The project team has constructed the first-ever digital model with examples of detailed buildings that is available for modification by the city of Salzburg itself. 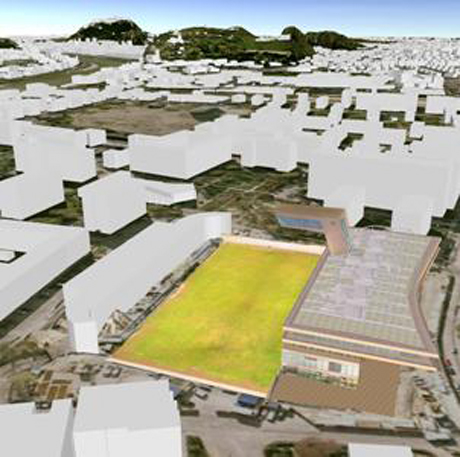 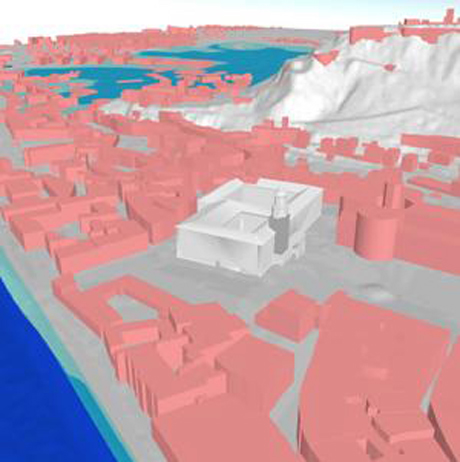 An untextured model of the Salzburg Museum is shown surrounded by extruded building footprint models with overlaid historical flood event horizons. (Image created by Autodesk.) Feedback from city staff has shown that participants are already thinking about the future. One workshop attendee stated that he can see a time when architects can post proposed buildings in an online model that is managed by the city -- a major leap considering that the current process has no online component.

Testing New Solutions
The next step in the research study will be for Salzburg to work with Z_GIS to trial not only Autodesk LandXplorer Studio Professional, a desktop data aggregation and city modeling tool, but also to test prototype technology that allows interactive visualizations of city models to be shared with large groups of stakeholders. 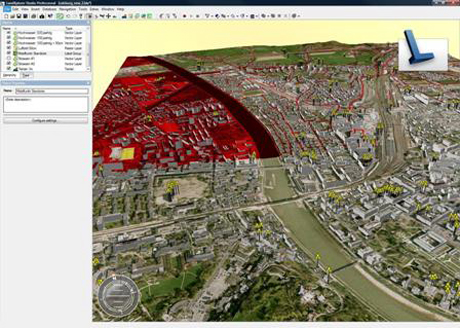 One purpose of the research study is to put emerging technologies and new software capabilities in the hands of selected cities to garner feedback. The research pilots aim to test concepts and workflows around interactive sharing of proposed urban design visualizations and analyses with diverse stakeholder groups in a city community. The next trial step in the Salzburg Research Pilot will be critical to begin demonstrating sharing capability to users in the city and to work with Z_GIS, which eventually may be involved in studying and participating in an online urban design workflow in Salzburg.

Josef Strobl, a professor and director of Z_GIS, suggests that cities worldwide are attempting to "move from isolated modeling workflows for geospatial features, planned building construction, and utility assets toward an integrated digital representation of the entire urban fabric that enables a completely new approach to managing cities and facilitating participation by the public in the urban design process." Autodesk believes in that vision and hopes that, through collaborative research effort, cities such as Salzburg can help discover the key requirements to build successful software products that will one day satisfy the needs of cities to deliver better information more quickly to their communities.

About the Author: Chris Andrews