This Olympic host city has garnered golden results with its efforts to make maps, orthophotos, and other GIS information accessible to everyone.


As Vancouver, British Columbia, opens its arms to Winter Olympics visitors this year, the city is also opening up its GIS data at unprecedented levels. The city launched its Open Data Catalogue last September, and expanded its web-based GIS offerings in January to include more than 100 layers of mapping and other data. GIS professionals and the general public can freely access the data, which is available in a variety of formats.

Vancouver's endeavor to share its data was propelled by a city resolution passed in May 2009 that pledged the city would "freely share with citizens, businesses and other jurisdictions the greatest amount of data possible." The resolution also directed city staff to adopt open data standards and open source software, stating the city "will place open source software on an equal footing with commercial systems during procurement cycles." 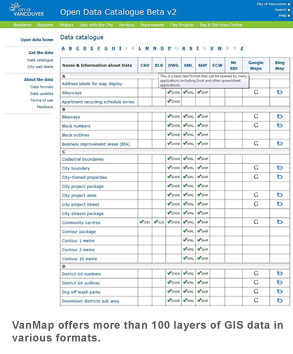 Although Vancouver is not the first major city to offer free GIS data, it is a leader in the extent of data being offered. Users can access information about property boundaries, contours, utilities, streets, parks, and numerous other topics, in formats that include DWG, KML, and SHP. Orthophotos, uncommon on other municipalities' open data sites, are also available.

City officials see Open Data as a more beneficial data management strategy than previous methods. "We'd been disseminating data for many years with license agreements," said Jonathan Mark, a GIS manager in the city's IT department. "We gave it away to some people, but the exposure and benefits were not as great."

With data more accessible, Mark explained, GIS applications can be developed by a larger community of software developers. As an example, he cited Vantrash.ca, an application that helps citizens monitor neighborhood garbage collection schedules, which change monthly in Vancouver. Visitors to the Vantrash web site can click on a map zone to determine their next trash collection day, and can also request that a reminder be sent to them via e-mail.

According to Mark, the Vantrash application exemplifies how a larger developer community can find niches the city might not otherwise reach. "With little effort on the city's part, citizens now have access to a service that wasn't previously available," he said. 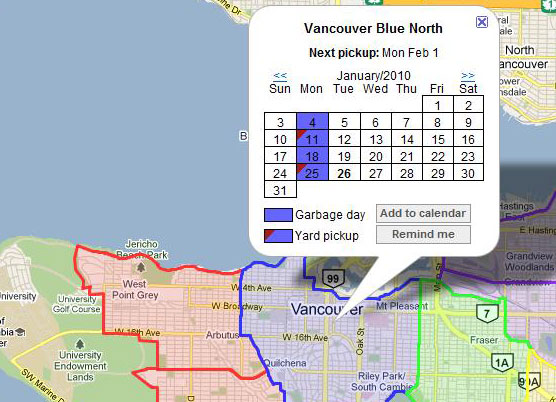 Vantrash allows users to click on a map and determine trash collection days.

For citizens and politicians, Open Data also allows open review of civic activities such as election results. "It turns anyone with access to the data into a policy wonk," added Eaves.

The Olympic Games have provided additional opportunities for Open Data and VanMap, the City's web-based mapping application, to benefit residents, visitors, and decision makers. In addition to identifying Olympic venue locations and parking information, the system shows bike routes, no-stopping areas, road closures, and other data relevant to the event that can be viewed or downloaded to build custom maps.

The VanMap application can be downloaded in three versions: an ActiveX version for Windows and Internet Explorer, a Java version for Mac and Windows, and a third option with reduced functionality. The first two versions require that an Autodesk MapGuide 6.5 viewer be installed on the user's computer. VanMapLite does not require any plugins or viewers, and works on any operating system with browsers that support PNG files.

Keep It Secret, Keep It Safe?

Along with all the beneficial uses of open data, city officials are aware that the data could be used for nefarious purposes as well, and limit the types of data made public. "We do a security and privacy analysis [on GIS data]," said Mark. "Things on Open Data and VanMap have passed that test." Details that might pose security risks or overly expose personal data are generally withheld from the catalogue.

Eaves questions whether safety is improved by limiting GIS data availability to a select group. That approach provides "an illusion of safety," he said, posing the question: "Which is more dangerous: keeping it all secret so almost no one knows about it, or making it all open?"

By favoring openness, Mark and other Vancouver officials hope to support the development of more applications for citizens. The city even hosts "hackathons" where developers convene and mutually explore possible applications and ways to mine data. The third such event was held January 26. Developer Closs wrote in a discussion group, "I suspect that as our open data community becomes more established and cohesive, we'll have more projects to rally around during these hackathons, and more people involved in each project."