Editor's Note: This article is a sidebar to the Cadalyst article, "Material Worlds."

Technologies that fall under the umbrella of 3D printing are additive, meaning the processes build up models layer by layer. In contrast, subtractive technologies such as milling cut away unwanted material from a bulk form to create an object. 2BOT Physical Modeling Technologies has developed a subtractive machine, similar to a CNC router, to model CAD and GIS data for architects, land developers, urban planners, and others. 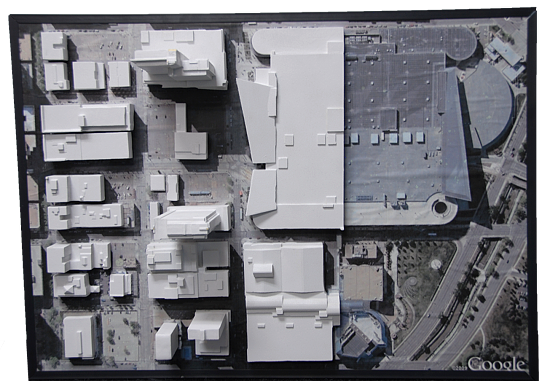 2BOT ModelMaker models can be draped with printouts of satellite imagery to represent expanses of terrain. Image courtesy of 2BOT.


Darren Coil, 2BOT’s vice-president of sales and marketing, explained that the company’s ModelMaker is designed to craft terrain and building models quickly and inexpensively, using a carbide bit to carve terrain and structures out of billets of base material. Although the machine can accommodate only one 12” x 12” x 2” tile of raw material at a time, the 2BOT Studio software automatically divides larger models into sections. After carving is complete, those component tiles can be glued together, horizontally or vertically, to create land- and cityscapes of any size.

Modeling materials such as extruded polystyrene foam (familiar as a building insulation product) range from $.06 to $1 per cubic inch, as opposed to additive materials that can cost $7 or more per cubic inch. A model of the Seattle waterfront district that could require 30 hours and as much as $5,000 worth of material to produce using an additive method would take only about three hours and $10 of material using the ModelMaker, said Coil.

Coil believes that physical models of topography and buildings are an efficient way to communicate with clients and city councils. The Wastewater Treatment Division of King County, Washington, used 2BOT models to demonstrate how the threat of flooding required that a particular building be either sandbagged or relocated. Senior GIS Specialist Shaun O’Neil explained, “We used the models to give the public a tactile 3D perspective of different terrains, mainly for public involvement and community relations applications. Not all people can easily interpret topographic maps to get a true understanding of our project areas, so a 3D model of the area conveys information to more people quickly and accessibly.”

Tangible models can benefit engineers, too: “Even though [engineers] are really good at interpreting 3D data, it’s still difficult to wrap your mind around it at large scale,” O’Neil said. “If you catch the mistake in the development or prototype stage [instead of later on], you can go from, let’s say a 40-hour redesign to a 10-hour redesign.”

The ModelMaker does have limitations. It can’t print in color, although completed models can be painted or draped with printouts of satellite imagery. Nor is it suited to product prototyping or manufacturing; it can’t make models with moving parts, and its 10-mil accuracy can’t reproduce fine details. “If you are a manufacturing company, and you want that kind of model, you can’t really use our machine,” said Coil. “The difference is that the ModelMaker is a communication tool, not an industrial prototyping tool.”