Desktop 3D printing solutions provider Ultimaker makes the case that immediate access and low cost are the keys to getting more iterations into designers’ hands — and ultimately, yielding better designs.


We’re hearing a lot these days about the burgeoning use of virtual and augmented reality (VR and AR) in the design world, for everything from clash detection to client review sessions. But no matter how useful these technologies may be, they cannot provide the same experience that a physical model can (not yet, anyway). There are many factors of a product’s design — including heft, texture, and ergonomics — that are more difficult to evaluate by sight than by touch.

“Talking about a feature in the abstract is different than running your finger over it and saying, ‘This is really too thick,’” said Matthew Griffin, director of community for Ultimaker North America. Based in the Netherlands and the U.S., Ultimaker develops desktop 3D printers, software, and materials.

Even in AEC applications, “it’s still more persuasive to more people” to have a physical model, Griffin believes. “Architectural firms in particular have invested in VR/AR, but clients want a model.”

Reducing the Time to Tangibility

If the value to a design firm and its clients is obvious, then the question is not whether designers should incorporate 3D printing into their workflows, but how often. And the answer, as far as Ultimaker is concerned, is as often as possible. When designers can use 3D printing frequently, “they can figure out more ideas, bring in more stakeholders … get more concepts under their belt,” Griffin said.

But many 3D printing scenarios put obstacles in the way of frequent iteration: outsourcing necessitates shipping printed models, slowing down the process; large, elaborately featured machines are expensive, meaning many companies only invest in one “hero machine,” which can result in long waits for access; and when printing costs are high, frequent use can earn disapproval from management. “Designers and engineers won’t print as often if they think it’s going to reflect badly on them,” Griffin explained. “It shouldn’t be $800–900 just to try something.” When prints are inexpensive, designers can also feel free to modify them as desired — scribble on a modification or note with a Sharpie, perhaps, or try out a new contour by slapping on some modeling clay.

As Ultimaker sees it, the key is to have multiple machines in house, with low costs for both the machines themselves and the prints they create. “Instead of one hero machine … you can have a room full of [Ultimaker desktop machines],” Griffin said. “It’s really changing behaviors.”

Building for a Professional Market

But what about the differences in capabilities between desktop printers and their larger, more expensive, more capable counterparts? Professionals creating designs often don’t need the most sophisticated materials and processes; they need to be able to “look at for a minute and toss it,” Griffin said. In contrast to the printing of end-use parts, maximum durability and highest resolution aren’t priorities in most prototyping scenarios.

That said, there’s not as big a gap in capabilities between desktop and industrial 3D printers as there used to be, when the former were thought of primarily as toys for makers and hobbyists. “We’re right within view of almost everything you can get with industrial machines,” Griffin enthused.

The Ultimaker S5, launched in May of this year, can create end-use parts and tools as well as prototypes. This model was designed based on feedback from professional users of the Ultimaker 3 model, addressing questions and problems from professionals in aerospace, medical, and other fields, Griffin reported. 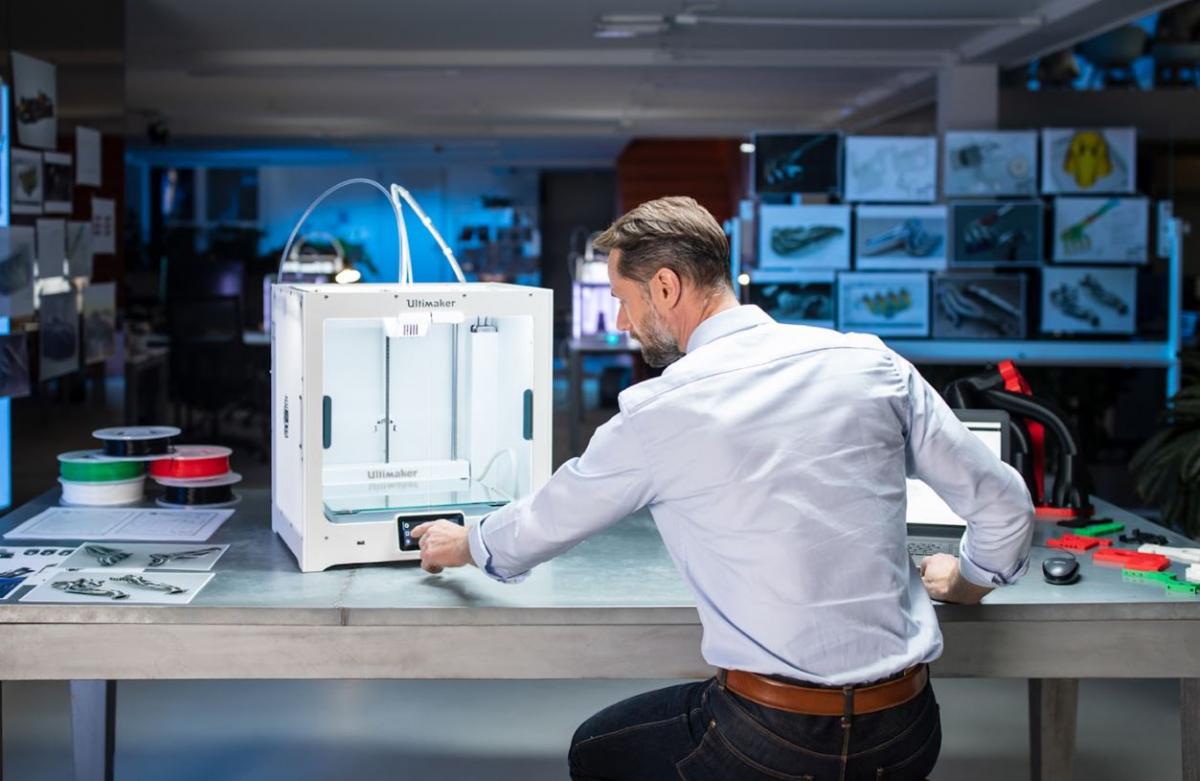 The Ultimaker S5 is a desktop 3D printer intended for professional uses, such as prototyping. Image courtesy of Ultimaker.