Cadalyst Labs Report: This evaluation of three compact, affordable, office-friendly models can help you determine which solution is right for your workplace.

The Formlabs Form 1+ is a $3,299 stereolithography (SLA) methacrylate photopolymer resin device capable of 25 micron (0.001") resolution with a roughly 5" x 5" x 6.5" vertically oriented build envelope. The Form 1+'s very high resolution makes it well suited for detailed applications such as greatly reduced scale/highly detailed printing of architectural designs or machinery. Using proprietary liquid resins deposited in thin layers that are cured by laser printheads firing through an optically clear layer of silicone, the Form 1+ builds a 3D print by hardening one layer of liquid resin at a time, rather than by laying down thermoplastic like an FDM printer does. 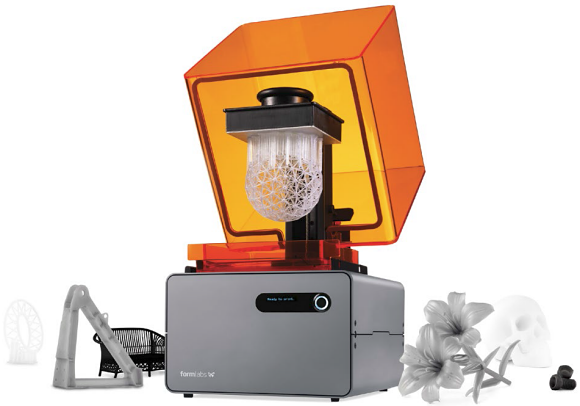 The Form 1+'s construction is a reversal of most printers, with the build platform at top (holding a spherical print) and resin supply tanks at bottom. Image courtesy of FormLabs.

Opening the Form 1+ box was all smooth sailing, as the device arrives fully assembled and emerges from its packaging ready to hook up to USB and power cables. The process couldn't be simpler — especially when contrasted with the Flashforge Dreamer's assembly-intensive setup process. An accessory kit of liquid resin tanks, tools, scrapers, and other utility items came in its own box, as did the two one-liter containers of liquid resins we used for testing.

The plug-and-play installation went perfectly, without a hitch. The whole experience felt very much like installing a new laser printer, from the well-written and illustrated quick-start guide to the part-finishing document (more on that later). In fact, if it weren't for adding the liquid resin into the tanks, you'd never have a clue you were working with a 3D printer. There was no clunky calibration or firmware updating; this is how installing a new device should work!

As the final step in preparation, I had to download the PreForm software from the well-organized Formlabs web site. That process took about 3 minutes and, like everything else with this printer, couldn't have been simpler.

After installing everything, it was time to select one of the six available liquid resin materials supported by the Form 1+. White, gray, black, clear, flexible, and castable materials are supported; only one may be used at a time. Then I closed the cover and fired up the PreForm software.

Once again using my Inventor-modeled sample parts, I opened PreForm and loaded one of my STL files. As the part loaded, I was prompted that there were continuity issues within the geometry (although I experienced no problems with the files when testing other devices with the same sample parts). The part was successfully loaded, and a grey resin selected to build layers 0.05-mm thick. I was then able to add the supports to the model (from the Edit menu), and see continually updated print time and material consumption estimates at the bottom of the program's interface as I changed print parameters.

The material consumption is rated in mL, which is useful since the liquid resin is sold by the liter. For my sample park bench print, the material consumption of 23.1 mL would translate to $3.45 (at the $149/liter prices quoted on the Formlabs web site) and would require approximately 4 hours to print with a 0.05-mm layer thickness.

The PreForm software uses a coordinate cube analogy for manipulation of part orientation, and rotation angle about an x,y,z-axis is done with input boxes — all of which seems very familiar from various CAD programs I've worked with. 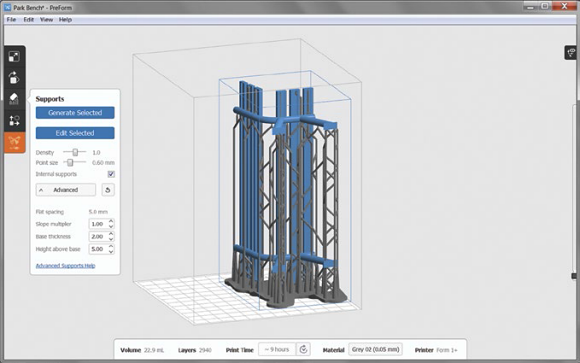 Due to the limited size of the Form 1+ build envelope, the park bench–shaped part (blue) had to be rotated and support materials (gray) added.

Once the work in PreForm is completed, the printing part of the process is at hand. The one and only way to get the print geometry to the Form 1+ is via a USB cable that is plugged into the PreForm-equipped computer — a much less flexible arrangement than other machines offer — but transmission time is acceptable. The USB-only connection of the Form 1+ likely means you'll either need to take a laptop to upload data to the printer or have a shared computer attached to the printer if you want to share the device in a public area.

Before closing the lid and starting the print, it's a good idea to give the unit's build platform a quick wipe-down with isopropyl alcohol to remove any residue from prior print jobs. Once the print operation has started, only pressing the front panel's power button or opening the unit's lid will pause it. The print is built up in layers, and because of the inverted nature of the build platform and raw material, the printed part appears to grow like a series of stalactites rather than the methodical inkjet-like action of an FDM printer.

When the print job is done, it is time to separate it from the build platform. I did experience a bit of a problem at that point, because I'd left the machine unattended and therefore was trying to remove the print several hours after completion. I found that the level of adherence to the build platform made the finished part quite difficult to remove. I was hesitant to apply any real force to the scraping tool for fear of damaging something, so I used a very sharp carpet knife to get under the part and create enough separation to work the scraper under the part and eventually pop it off the baseplate. Apparently, removing the part immediately after print completion would have made the process easier.

Finally, a quick dunk in the included finishing tank filled with isopropyl alcohol removes any residual liquid, and the part can then be clipped away from the supports using needle-nose clippers.

Positives: The Form 1+ delivers part clarity and smoothness that is stunning — making even good-quality FDM-based printers look rough by comparison. At the 50-micron (0.05-mm) resolution, parts are smooth and ready to show off, while using transparent materials at the 25-micron (0.025-mm) resolution can yield parts that almost look like glass. And while the resolution is substantially higher than with FDM technology, the print times are similar, since the laser curing process seems to move more quickly.

Negatives: As mentioned above, the difficulty in removing prints from the build platform is certainly a concern.

The other issues are that of the expense ($149 per liter) and maintenance (filling, cleaning, and not fouling the optical or silicone surfaces) of the resin tanks, which make printing more costly and labor intensive than FDM-based printers. Additionally, each $59 resin tank only lasts for about 2 liters of resin because its optical and silicone components degrade due to laser exposure, so you must factor in the ongoing cost of replacement tanks. When compared with the ease of an FDM filament that can be dropped or knocked around without harming it, the Form 1+ liquid resins require a lot more attention.

The Formlabs Form 1+ delivers outstanding print resolution, good speed, unsurpassed ease of installation, and functional software. However, its expensive liquid resins and limited-use supply tanks make it a more challenging and more expensive machine to maintain than FDM plastic filament–based printers. The extremely high-resolution parts and somewhat greater speed of the Form 1+ could make it a logical choice for architects and engineers who need the extra detail to impress clients, and can therefore justify the higher price tag.