The ability to produce 3D models can provide many benefits for companies that work with CAD and GIS data, whether they design business parks or baseball helmets. Investing in a 3D printer is not cheap, however, and the outlay doesn't end with the machine itself: Regardless of the type, every printer requires raw material, such as resin or metal, to build 3D models.

The cost of the machine can quickly be eclipsed by that of supplies. Conor MacCormack, cofounder and CEO of Mcor Technologies, likened the scenario to buying a new razor, followed by a stream of expensive blades. "Lots of times," he recalled, "we would go to visit a university, for example, and they would have a 3D printer but have a cover over it, because they couldn't afford to use it."

MacCormack aims to mitigate this ongoing cost with 3D printers that use a different kind of raw material: printer paper. "It's a ubiquitous material that everybody can get their hands on," he said. In addition to being inexpensive, it's also nontoxic, stable, and produces recyclable models, he explained, unlike some other options on the market. According to MacCormack, high material costs prevent users from realizing "the real power of 3D printing": producing multiple models to explore what-if scenarios.

Mcor's technology is best suited for prototyping and early design purposes, including product design, architecture, medical/dental, casting, and packaging applications. It's not intended for manufacturing finished products or creating full-strength parts that will be subjected to rigorous functional testing, although it can create living hinges that don't work-harden.

Beyond Black and White

Mcor just launched the IRIS, which MacCormack calls "the world's first paper-based full-color 3D printer." The IRIS can print models of parts, buildings, landscapes, and more, in as many as 1 million colors, at a resolution of 5760 x 1440 x 508 dpi. There is little variation between the model colors represented on a computer screen and those realized in the finished model, said MacCormack, and multiple models of the same object will be consistent in color. 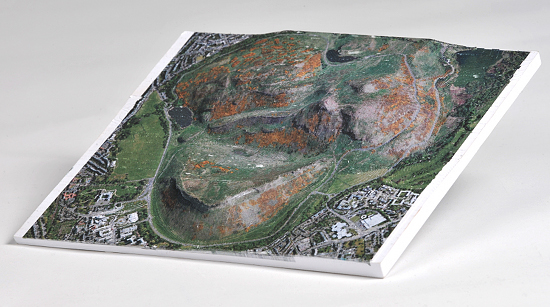 The Mcor IRIS can produce 3D part, building, or terrain models, such as the one shown here, in full color.


"Color really opens areas of the market that were not accessible to us before," MacCormack noted, citing archaeological and geospatial applications. "With this new color machine, we can take GIS data and print that out and get very high resolution — it really open doors to [using data from] Google Maps, for example. ... It's really going to change how people design and innovate in the future."

To build a model, the IRIS requires "three reams of standard office paper you can buy from an office supply store," said MacCormack. It also uses a water-based adhesive ($70 per 600-mL bottle) to bind the sheets together, and CMYK cartridges ($700 for the set, or $195 each) of Mcor's patented inks to provide color. According to Mcor, each cartridge includes 320 mL of ink, and if all four colors are used equally, the four-pack will last for approximately 48 builds, assuming the builds are filled with parts. 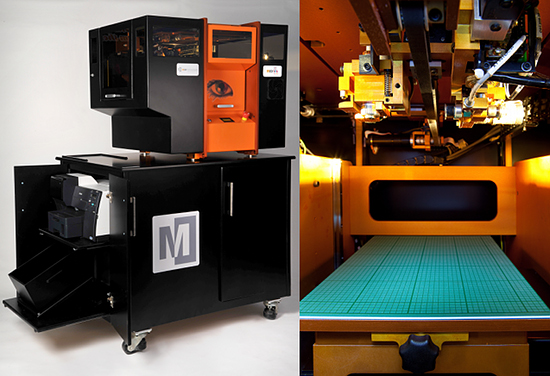 The Mcor IRIS (left) comprises both a 3D printer and a 2D printer, which is built into the unit's stand. The build table (right) is where models take shape inside the 3D printer.


The IRIS produces models via two distinct processes. First, the user loads reams of paper into the 2D offset printer that's built into the stand, and each sheet is printed in color. When this step is complete, after about an hour, the user transfers the stack of paper to the 3D printer at the top of the unit. The IRIS selectively applies adhesive to one sheet of paper, presses the next sheet onto it, then cuts out the shape of that layer with a tungsten carbide blade. The process is repeated, gradually building up a complete model, sheet by sheet. This step is typically completed overnight; according to MacCormack, the speed is comparable to that of professional 3D printers that use the fused deposition modeling process. 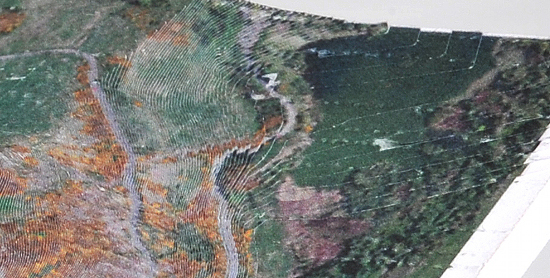 In this close-up taken from the terrain model pictured on the previous page, the edges of individual sheets of paper are visible, illustrating how the model is built up one layer at a time.


After users remove finished models from the machine, they must remove the waste paper pieces by hand; the task can take a minute or two for simple models and as long as 20 minutes for complex pieces, said MacCormack. According to MacCormack, the finished are quite durable, and pleasant to touch, not rough or powdery. Users can apply water-based coatings to make them harder, or more flexible. "You can make parts that are fairly close to plastic, strengthwise," he explained.

Partnering with a Paper Expert

In addition to an unusual raw material, Mcor also offers an unusually broad array of acquisition options. For the price of $47,600, customers can purchase the IRIS outright or opt for a leasing arrangement that includes the printer, consumables, and service for three years. In the latter case, once the three-year period is up, customers have the option to extend the plan annually, buy the printer, or give it back. "We're unique in our selling model; nobody else can offer that," said MacCormack, noting that such a plan would be prohibitively expensive with systems that use more costly raw materials.

And for those who don't need an in-house option at all, including nonprofessional consumers, Mcor is teaming with Staples to offer a 3D printing service. Customers will be able to upload files for printing on the IRIS, then pick up the models in their local Staples store, or have them shipped. The office supply chain is currently rolling out the service in the Netherlands, with other countries to follow. "We want everybody to be able to have access to 3D printing," said MacCormack.