Throughout history, every human creation, whether a wheel or a spear or a shoe, began as an idea. That’s as true today as it was for our cave-dwelling ancestors. Over time, however, technology has eroded the period of labor that separates the light-bulb moment from the finished product. Today, thanks to 3D printing, we can give a design tangible form simply by pressing a button — no elbow grease necessary. Even to a technologically savvy denizen of the twenty-first century, it can seem very much like magic. 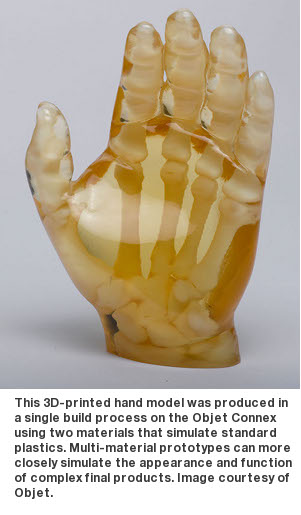 A little familiarity, however, is all it takes to transform the magical into the mundane. Although it’s been around for decades, it’s only been in the past couple of years that 3D printing has garnered widespread recognition among professional CAD users, enthusiasts, and the general public.

This burgeoning popularity isn’t just a result of more mainstream media coverage; falling prices, improved reliability, and a diverse menu of modeling materials, production methods, and delivery options have all contributed. Three-dimensional printing has grown into a practical, accessible, user-friendly technology offering benefits to AEC, manufacturing, GIS, and even consumer markets. Ofer Shochet, executive vice-president of products for Objet, summed it up this way: “[Users are realizing that] 3D printing is not just a great idea — it is already affordable for you, it can be a reliable part of your process, it can help you in your daily product design activities.”

Jargon can be puzzling in any industry — as CAD users well know — but the numerous names in play can make 3D printing especially confusing. Rapid prototyping covers the automated, additive construction of 3D models for all purposes, but the term itself neglects the growing application of the technology to create final-use items. Additive manufacturing is widely used but seems to have the opposite problem, at least to the layperson’s ear. Adding to the muddle are variants such as direct digital manufacturing and instant manufacturing, plus vendor-coined terms such as EOS’s e-manufacturing.

3D printing, n.: Fabrication of objects through the deposition of a material using a print head, nozzle, or another printer technology. DISCUSSION: Term often used synonymously with additive manufacturing; in particular associated with machines that are low-end in price and/or overall capability.

Industry expert Terry Wohlers, principal consultant and president of Wohlers Associates and chair of the ASTM F42 Terminology Subcommittee, elaborated: “While additive manufacturing is the official ASTM industry-standard term for the technology and the industry, 3D printing has become the de facto standard. Among those using 3D printing as the generic, umbrella term are the mainstream media, bloggers and tweeters, the investment community, and major CAD companies, such as Autodesk and SolidWorks.”

Although the details vary, all the technologies under the 3D printing umbrella use similar processes to fabricate objects. In each case, 3D data — typically a model from a CAD program — is divided by the printer software into thin cross sections. (Most units support the STL file format, which most recent CAD programs offer as an export option.) Then the printer builds the tangible object by creating those cross sections as layers of material, one at a time. (Read the sidebar, “2BOT Carves Out Niche in Modeling Market.”)

The process is similar to reconstructing a whole tomato by stacking its slices atop each other. The CAD data determines whether the end result is a tomato or a ham; the type of printer, its resolution, and the raw material used determine whether the tomato comes out red and rough-textured, or gray and smooth, or marked with striations where each layer was added.

The most widely used technologies include:

Regardless of the method, users need a technology to consistently deliver expected results before they can make it an integral part of their workflows. “The issue of robustness is critical, especially for professional users,” said Shochet. “Today, customers almost take it for granted that the reliability is there.”

Joe Titlow, vice-president of product management for Z Corporation, agrees that the technology has matured to a point where it’s proven and reliable, and customers don’t have to worry about downtime. “If you go back even ten years, that wasn’t the case,” he noted, “but we’ve had that [reliability] for five to six years now.” According to Titlow, that reliability — and improved performance in areas such as model detail, smoothness, color, and accuracy — is what has enabled 3D printing to become standard operating procedure in many companies. “It’s the coalescing of these individual features that has made it mission-critical in a lot of cases.”

For Fred Fischer, director of business development at Stratasys, improved performance means “making the printed output look, feel, and act more like a part that came out of traditional CNC [computer numerical control] or injection-molding methods — and we’ll continue to see more of that realized.” User-friendliness has also improved notably, Fischer added. “If you rewind the clock, there used to be more of an art to operating [these machines]. ... 3D printers are continuing to become much more easy to use, just like 2D printers.” 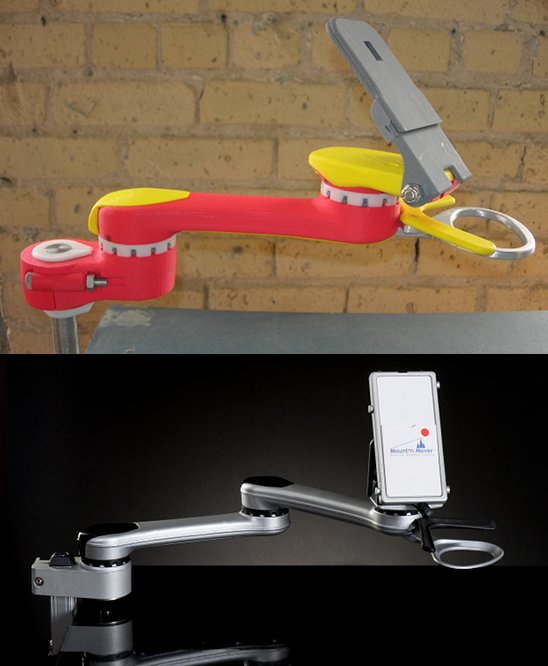 When designing the Mount’n Mover, which holds computers and other items for wheelchair users, BlueSky Designs used a Stratasys Dimension SST 3D printer to print eight ABS prototypes (top) for $3,000 — $20,000 less than three outsourced metal prototypes. “The more prototypes we can get out there and get into users’ hands, the more informed we can be about the product’s strengths and weaknesses,” said mechanical design engineer Nick Lee. Images courtesy of Stratasys and BlueSky Designs.