Monochrome ZPrinter 150 and multicolor ZPrinter 250 offer speed and ease of use at an entry-level price.


Z Corporation is rounding out its line of 3D printers with two new commercial-class, entry-level models: the ZPrinter 150 ($14,900, monochrome) and the ZPrinter 250 ($24,900, multicolor). The new models are smaller in scale and physical footprint but offer features commonly associated with higher-end models, such as speed, ease of use, and the industry's lowest operating (per-model) cost, Z Corporation reports. The ZPrinter 150 and ZPrinter 250 are available now through the company's worldwide reseller network. 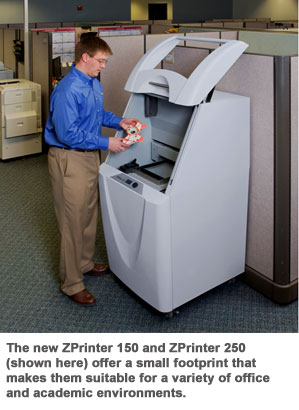 The new ZPrinters also print five to ten times faster than other 3D printing technologies, according to Z Corporation, and can print multiple, stacked models simultaneously. They incorporate automation features first offered in the mid-range ZPrinter 450, including automatic set-up, automatic powder loading, and self-monitoring of materials and print status. They are clean, quiet, and free of hazardous waste.

ZPrinters are the only 3D printers capable of simultaneously printing in multiple colors. Joe Titlow, vice-president of product management at Z Corporation, told Cadalyst that color 3D printing can produce realistic prototypes that "in some cases you cannot distinguish from the real thing" — for example, in the athletic shoe market, where designers use multicolor rubber prototypes to evaluate aesthetics during a very fast design cycle. Using color, designers in all fields can better evaluate the look, feel, and style of designs; highlight portions of an assembly or complex part; and enhance 3D models with graphics, logos, text, labels, and design comments. Realistic prototypes can be used for internal research as well as to support marketing research and sales. 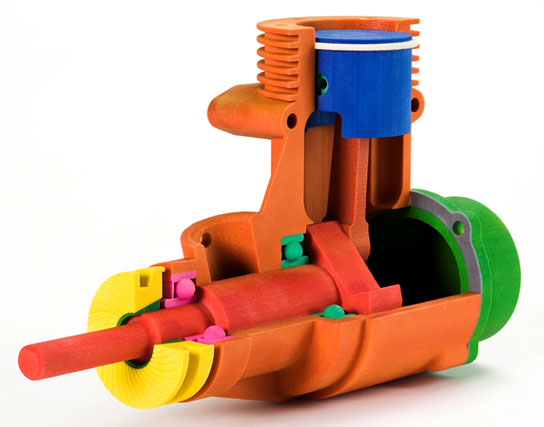 A multicolor prototype produced by the ZPrinter 250. 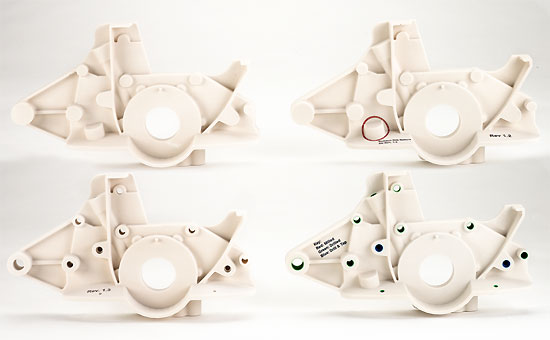 Prototypes can be printed to include labels and annotations.

Titlow said that the new models support Z Corporation's goal of bringing 3D printing to as many people as possible in the professional market. The new entry-level units can be deployed for a broad spectrum of applications but are likely to appeal most to price-sensitive users, including small- and medium-sized shops in the manufacturing sector (including industrial designers); architectural firms that cannot make the investment in higher-priced models; and educational institutions operating on tight budgets. Large companies that already have centrally located, larger 3D printers in-house might deploy the new, lower-cost models at the local workgroup level, Titlow added.

Currently, Titlow said, nearly two-thirds of Z Corporation's customers are in the product design market, 25% to 30% are in academia, and the remainder (approximately 10%) are in architecture, geospatial, entertainment, medical, and other fields. The architectural community has shown tremendous interest in 3D printing in recent years, Titlow added, and the company hopes the low-cost ZPrinter 150 and ZPrinter 250 make the technology more accessible to this price-sensitive market.