A newcomer promises to take the hassles — and toxic chemicals — out of post-processing, but its full capabilities are yet to be seen.


“We just accept the limitations of today’s 3D printing because we don’t know anything else.” That’s how Frank Marangell, president and CEO of Rize, sees the professional 3D printing landscape — which he’s hoping to shake up with his company. After two years of preparations, Rize came out of “stealth mode” last month, announcing itself to the public. The company is starting its beta rollout of the Rize One augmented polymer deposition (APD) 3D printer later this month, and if all goes well, sales will begin by October, said Marangell.

The company is entering a market served by well-established competitors, but Rize asserts that it’s offering something new: “the only hassle-free, safe, and affordable industrial-class desktop 3D printing solution.” Industry veteran Marangell, who formerly served as a vice-president for Stratasys and president of Objet’s North American subsidiary, spoke to Cadalyst about these claims and his vision for the future.

Taking On the After-Party

The Rize One liquefies a solid material and extrudes it through printheads, building parts, prototypes, and other 3D models one layer at a time. That aspect of the process is not new technology; it’s similar to the fused-deposition modeling (FDM) printers from Stratasys, among others. The Rize One uses different materials, however, meaning that printing speeds, temperatures, and most importantly, the need for post-processing differ too.

Post-processing — whether it involves cutting away support structures from parts, sanding rough edges, or smoothing surfaces with a chemical bath — is a primary reason why many designers and engineers avoid carrying out their own 3D printing, Marangell believes. Instead, they send their designs to an in-house lab or out-sourced printing bureau, introducing delays into their workflows.

To eliminate the need for cutting, brushing away, or dissolving support structures, the Rize One lays down a thin layer of release agent between the part being printed and its support, both of which are made from Rizium One, a proprietary thermoplastic. “This release is outside the solubility range of the thermoplastic,” explained Marangell. “It [acts] like Pam on your frying pan.” As a result, the company claims, users can easily remove support structures from their finished parts by hand (as demonstrated in the video below).

The second goal is automatic surface smoothing, which is currently in the works. Although the Rize One can build near-isotropic “real end-use parts,” they are not perfectly smooth; distinctions can be detected between the 0.25-mm layers that compose each part. Next year, Rize will release an upgrade to the Rize One that will enable the machine to jet between those layer edges, smoothing part surfaces.

“The machine is designed so that it can be easily upgraded,” said Marangell. “Although, for the price that we have, I’m expecting that people will just buy another [rather than pay to upgrade the capabilities].”

Safety on the Desktop

“The 3D printers [that companies currently own] are all down in the lab, locked away from the engineer,” lamented Marangell. Rize’s goal is to “break the chains of the lab” — to provide a machine that is safe to use in an office environment, without any special ventilation or protective equipment. The Rize One is marketed as a safer choice than other desktop 3D printers, both for the environment — all printed parts and support structures can be recycled — and for people. 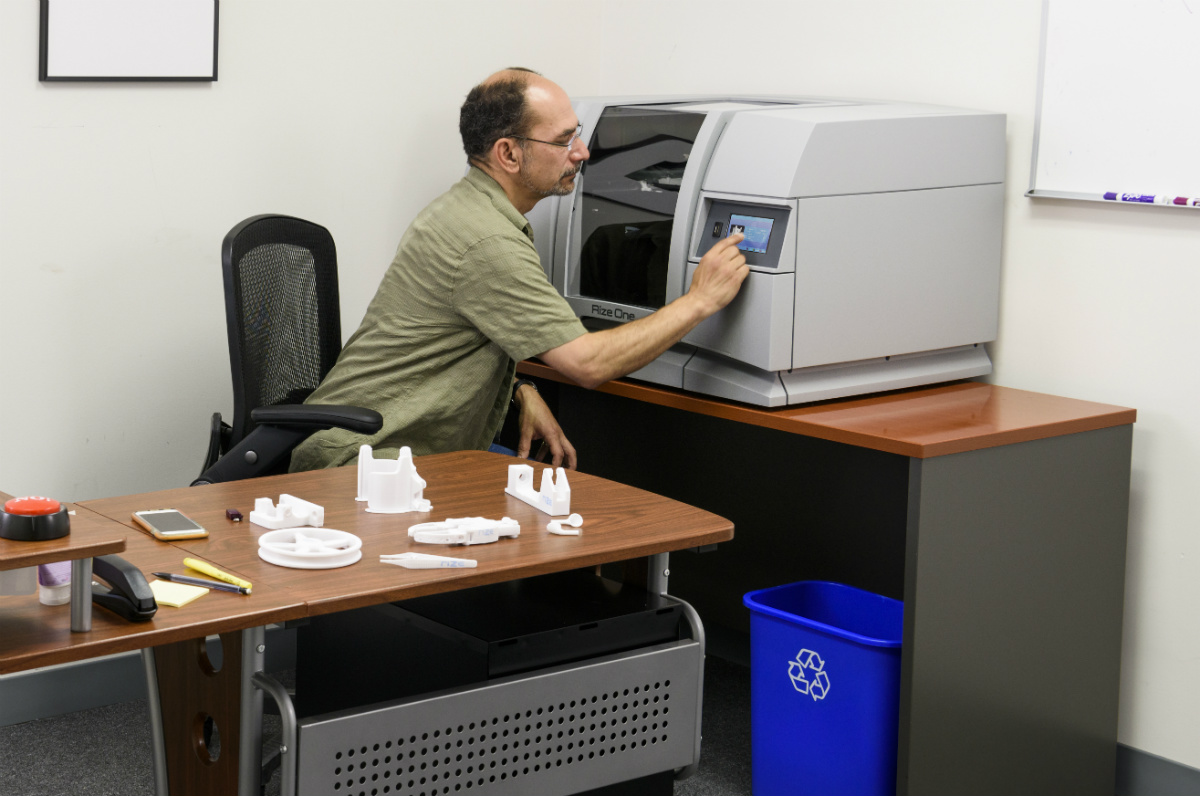 The Rize One is designed to be operated in an office environment; it does not emit any toxic gases or particulates, and requires no special ventilation, the company reports. Image courtesy of Rize.


“You can’t put a price on health,” Marangell said, pointing out that while ADP is nontoxic, most other thermoplastic extrusion technologies emit toxins during printing, post-processing, or both. “In those desktop units that don’t have any ventilation, it’s really dangerous.”

Although Rize was able to develop a non-toxic formulation for its printing material, “it’s very difficult to find inks that fit that same criteria,” Marangell reported. For the time being, the Rize One offers only one color for its marking ink: a dark blue that “looks good and can be extremely nonvolatile.” The Rize One is designed to support full-color inking, however, and the 2017 upgrade will include additional printheads, plus software and firmware updates to unlock that capability. 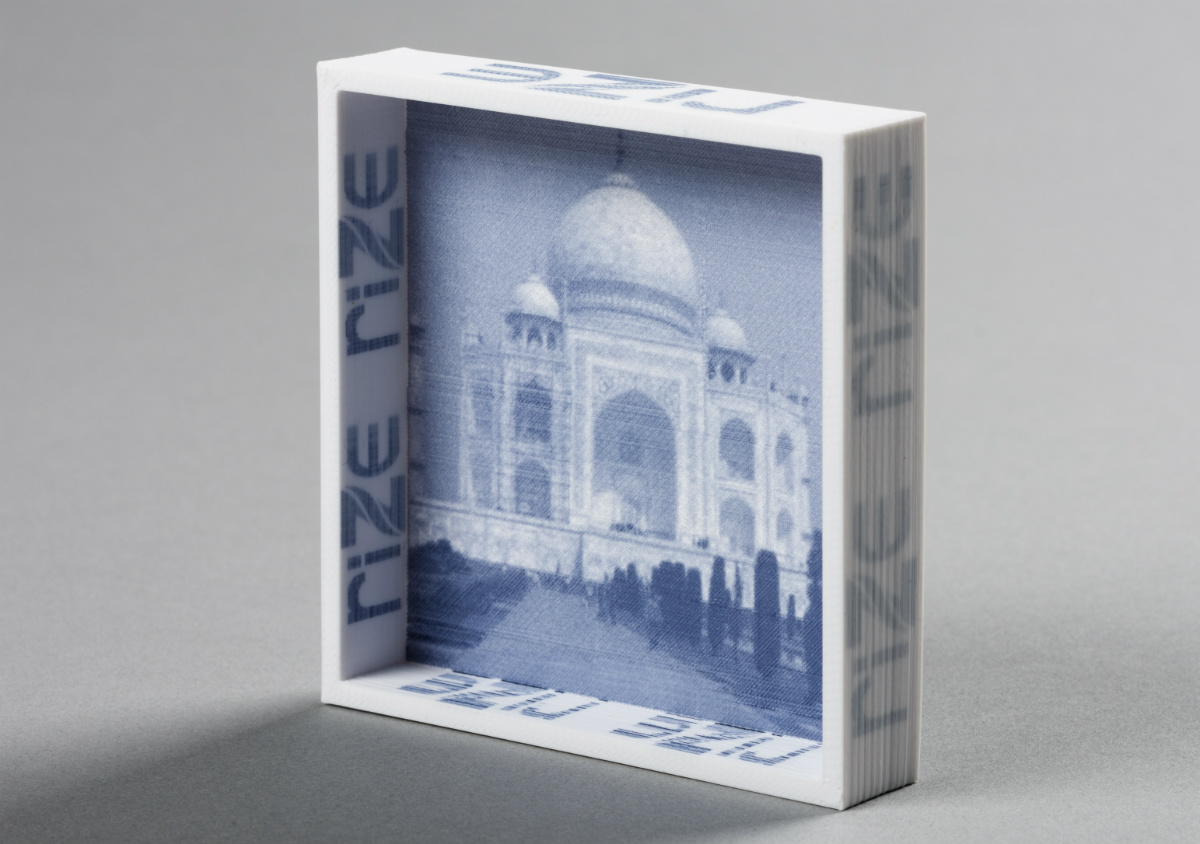 Currently, the Rize One can only apply monochrome ink, but the company plans to upgrade its capabilities to full color next year. Image courtesy of Rize.

When the Rize One is made commercially available in a couple of months, it will cost $19,000; a package that adds one year of service, an estimated year’s worth of materials, and startup items such as a stand will cost $25,000.

According to Marangell, although costs vary for different materials, the typical price for a spool of FDM-type printing material is about $250 per kilogram. “That’s what pushes the market to try to go to open-source material purchases,” he asserted. In comparison, Rizium One costs $99 per kilogram, despite the fact that “the very high-end medical- and engineering-grade filament … costs me three or four times what Stratasys would pay for their material,” Marangell said. Cartridges of the release agent and marking ink also cost $99 each.

Rising Higher in the Future

For the time being, Marangell expects that the primary uses for the Rize One will be creating mechanical design prototypes and manufacturing tooling. In addition, Rizium One’s medical-grade status opens up applications ranging from custom eyeglass frames and sleep apnea devices to surgical guides.

According to Marangell, “The really interesting thing [about APD technology] is the ability to jet on top of any voxel on that part [that’s being printed].” That translates into the ability to affect the mechanical properties of any portion of a printed item at the layer level — a capability the company intends to capitalize on in the future.

For example, Marangell envisions printing a plasticizing agent between layers of rigid plastic to make custom hearing aids that are hard where necessary, but soft and comfortable against the skin. “Because of APD, we can plasticize any voxel, making it rubbery … we can make rubber and rigid [sections] on the same part,” he explained. “When we have this … it’s going to revolutionize the hearing aid industry.”

In addition, Marangell believes that Rize will provide a solution for spare-part replacements in the future. “If we can get smooth finishes and full color, that’s a huge opportunity,” he said.