Nano Dimension, which made a splash at last year’s SOLIDWORKS World with its capability to 3D-print circuit boards with embedded electronics, announced the launch of “the world’s first 3D-printed electronics online service.” With the new service bureau, designers and engineers can use an online portal to upload and optimize their designs, get price quotes, and order 3D-printed circuit boards, prototypes, and other items created on DragonFly 2020 Pro 3D printers.

The company has also launched a Nano Dimension add-in to help SOLIDWORKS users edit and print 3D print designs that contain conductors. Using the add-in, they can point and click to subdivide an object, then automatically select conductive or insulating materials for different bodies of the object, and send their models to Nano Dimension 3D printers.

Rize, which launched its office-safe Rize One printer at last year's event, announced its own add-in fostered by a SOLIDWORKS partnership. With the enhanced technical integration provided by the Rize Add-In for SOLIDWORKS, users can simply select an option from the Tools menu in order to send a model to their Rize printer.

HP had collaboration news of its own: The company announced that it would team up with Dassault Systèmes to optimize SOLIDWORKS to take advantage of voxel-level control capabilities in HP Multi Jet Fusion 3D printing solutions. (Voxels are component units in three dimensions, as pixels are in two dimensions.) Stephen Nigro, president of HP’s 3D Printing business unit, explained that the printers fire chemical agents that determine the state of each individual voxel; this means that two neighboring voxels could have different colors or even different material properties, if desired.

“This was science fiction not long ago,” Bassi commented. “Today, there’s no software that can control the voxel … [but] the world is changing.”

HP also added to its existing Jet Fusion lineup with the new Jet Fusion 300/500 series of printers with voxel-level control, which enable users to produce functional, full-color parts from engineering-grade thermoplastics. The new models include the four-agent 340 and 540, which print in black and white only, plus the 8-agent 380 and 580, which print in full color.

Ramon Pastor, general manager of Multi Jet Fusion for HP, explained that the portfolio expansion addresses several goals: democratizing offerings for smaller companies; prototyping and production with the same technology; and the ability to create functional parts in full color, as well as black or white, with the same mechanical properties. “Color transmits information … transmits things you want to communicate to the user of this part,” said Pastor, giving examples as diverse as visual aides, guides, labels, and jewelry. 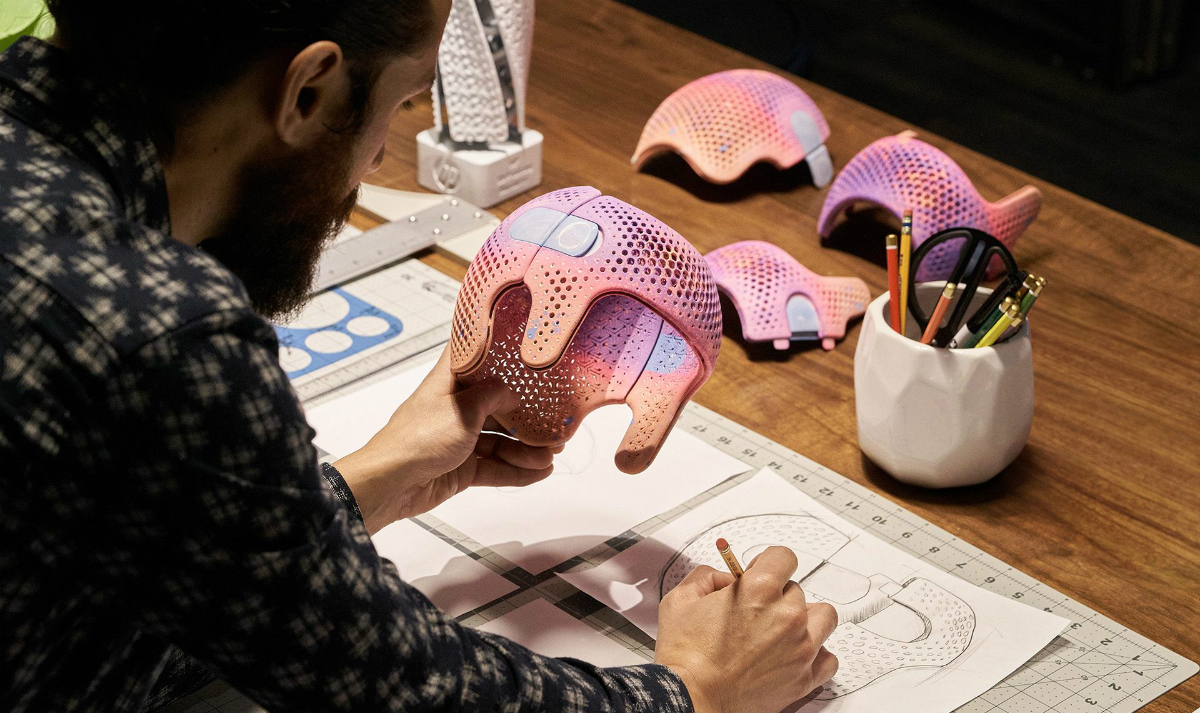 With voxel-level control in HP Multi Jet Fusion 3D printers, users will be able to produce parts that comprise more than one color or set of material properties. Data courtesy of Invent Medical and NACAR; image courtesy of HP.

The 3D printing market is a $4 to 5 billion industry today, and growing at a breathtaking rate — perhaps 30% CAGR — but it has “a long way to go,” said Nigro. “Eventually you’ll get to a tipping point; the question is, When?”