Today Stratasys launched the J750, which it calls the “world’s only 3D printer to produce full color, multi-material prototypes and parts in a single 3D print.” These capabilities improve on those of the company’s Objet500 Connex3, launched in 2014. The Connex3 combines as many as three materials in a print job, yielding a limited number of color choices. The J750, in contrast, has the capacity for six materials per job (plus one support material), yielding more than 360,000 color combinations and full-color gradients. The color is also repeatable from part to part and from one machine to another, confirmed Roger Kelesoglu, general manager of global sales enablement for Stratasys. Texture mapping enables the replication of text, logos, patterns, and designs on the printed object.

Those features come in handy at the OtterBox product testing lab in Fort Collins, Colorado, where the J750 is used to print prototype smartphone cases in a rainbow of colors and patterns. A prototype with an elaborate floral design would be infeasible to paint by hand, pointed out Brycen Smith, engineering technician supervisor, but it is no more difficult for the J750 to create than a solid-color case.

The team prints multiple iterations of each case design to check the location of buttons, tweak snaps, and ensure that camera openings do not obscure the lens. It’s essential that every detail is perfected before moving to full production, because the company will build as many as 1,500 steel molds in preparation for a major product launch, said founder and Chief Visionary Officer Curt Richardson — all of which would have to be changed in the event of an error.

His company has been using 3D printing to create OtterBox and LifeProof case prototypes for about 10 years, said Richardson, but now, thanks to advances in the technology, “they’re real close to production parts.”

The multiple material inputs enable the J750 to combine materials with different properties in a single print job, increasing the realism of prototypes by controlling their flexibility, glossiness, opacity, and other characteristics. A rubbery section that would have traditionally required overmolding can be printed at the same time as a rigid part or transparent window, for example. 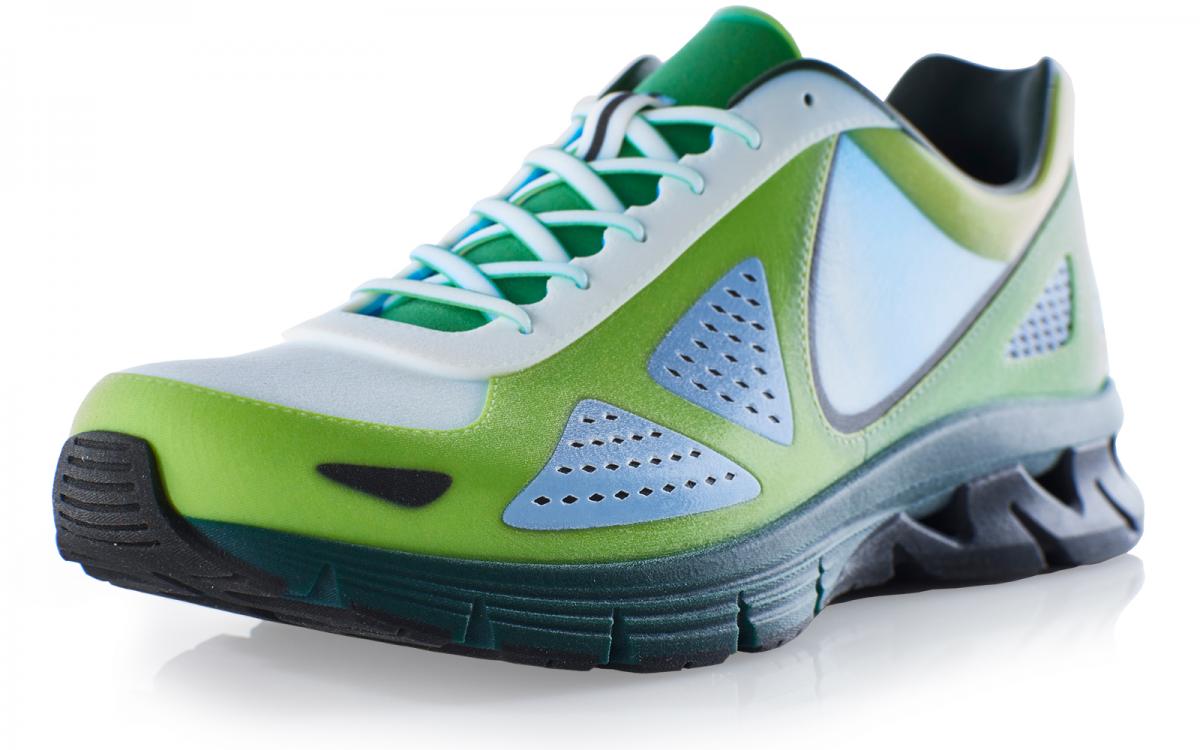 This full-color sports shoe prototype was produced on the Stratasys J750 in a single print run. It features a rigid, smooth upper section, a rubber-like sole, and text on the insole.

J750 Has Appeal for the Holdouts

The J750 is well suited to prototyping, but it can also produce final-use items such as production tools, manufacturing molds, jigs, and fixtures from engineering-grade or general-use plastics. Although creating prototypes for consumer product manufacturing will likely be the most common use, Stratasys also expects the J750 to appeal to design firms; service bureaus; educational, medical, and research institutions; and special effects and animation companies.

Although much of the initial interest in the J750 has come from current customers, the new model is also attracting a certain type of company to 3D printing for the first time, Stratasys Chief Business Officer Joshua Claman told Cadalyst. That group comprises companies such as industrial design firm Synergy, which “didn’t want to start a whole department around post-processing,” Claman explained. In other words, the team was reluctant to add 3D printing to their workflow if it would require cleaning, assembling, sanding, painting, or otherwise fine-tuning their printed items.

Previously, Synergy would use a host of technologies to prepare a prototype, including CNC, water printing, casting, sanding, silicone engraving, and pad printing. With the adoption of the J750, however, the Synergy team was able to both simplify their workflow and avoid the post-processing steps required with some other printers.

Ultimately, the J750 implementation cut Synergy’s cost of prototyping by more than 70% and reduced average prototype creation time from three weeks to one day. “We’ve come up with a very disruptive printer,” Claman commented.

Although the J750 is more broadly capable than its predecessors, Stratasys stresses that it is also easier to use, thanks in part to its new software. “PolyJet Studio is designed to take the thought out of getting access to all that capability,” said Kelesoglu.

The user interface in the new software is designed to ease the processes of choosing materials, colors, transparencies, and rigidity; optimizing the build; and managing print queues. Images and colors are preserved when users import projects from design and CAD software via VRML files.

According to Claman, the company is now in a stage of development where it is seeking to do the following:

Manufacturing is more demanding than prototyping when it comes to tolerances, so Stratasys is focusing R&D efforts on decreasing variability — ensuring that every completed part matches the originating CAD file and specifications exactly, Claman explained. There is also a need to manufacture parts bigger than Stratasys printer build trays can currently accommodate, so increasing machine sizes is another area of interest.

Regarding the acquisitions that Stratasys has made in recent years to support these goals, Claman said, “We have all components we need to move ahead, but there’s nothing static about it; what we have now is not going to serve us for the next five years.”

Customers can order the Stratasys J750 now, but Stratasys has not publicly revealed its price. It is, said Kelesoglu, priced at a “premium level, above the Connex line” — which likely puts it above $330,000. The J750 comes with a three-year Diamond Care warranty, which covers parts, labor, and printheads.