The F123 series is intended to help less-experienced users produce prototypes at a lower cost than the company’s previous generation of 3D printing technology.


Although it has grown rapidly in recent years, the rapid prototyping market still has great potential according to Stratasys, a manufacturer of 3D printing and production systems. Drawing on survey feedback, Stratasys has concluded that less than one-quarter of the professional prototyping market — estimated to be worth $10–15 billion globally — is currently being served by 3D printing technology.

“We believe there are significant untapped opportunities,” said Rich Garrity, president of Stratasys Americas, in a press conference at SOLIDWORKS World 2017. “We see designers in many cases still using handmade methods,” such as sculpting clay and carving foam, to create prototypes.

Leaving the Old Dimension Behind

Last month, Stratasys announced its F123 series, a new family of fused deposition modeling (FDM)-based 3D printers that replaces its Dimension series. To meet the needs of design workgroups that create prototypes for concept verification, design validation, and/or functional performance, Stratasys designed what it calls an “end-to-end solution for prototyping” that produces dimensionally accurate, repeatable prints. The F123 series is also “office-friendly,” meaning it has no special ventilation, space, safety, or electrical supply requirements. “We think this a much smarter version of prototyping than what’s available today,” said Garrity.

According to Stratasys, ASA and ABS are production-grade materials that can build stable, repeatable parts; PC-ABS is an engineering-grade material for stronger, impact-resistant parts; and PLA is a low-cost thermoplastic used for creating early design prototypes quickly. Parts are produced within an accuracy of +/- .200 mm (.008 in), or +/- .002 mm/mm (.002 in/in), whichever is greater.

The printers hold as many as four different materials at a time, which can be swapped out in less than a minute, according to the company. Materials are available in up to ten colors. Completed prints are placed in a soaking tank to dissolve the QSR support material.

PLA prints have breakaway support structures made of PLA instead. The build platform can be removed from the machine and flexed to loosen these items (similar to twisting an ice cube tray to pop out the cubes).

One concern was how to make the systems accessible to professional users who work with digital designs, but are not necessarily 3D printing experts. “Ease of use is definitely a factor in adoption,” noted Patrick Carey, senior vice-president, Sales. To simplify operation, the F123 models can be controlled via a touchscreen user interface, or operated remotely from any networked computer; build progress can be monitored from any mobile device. 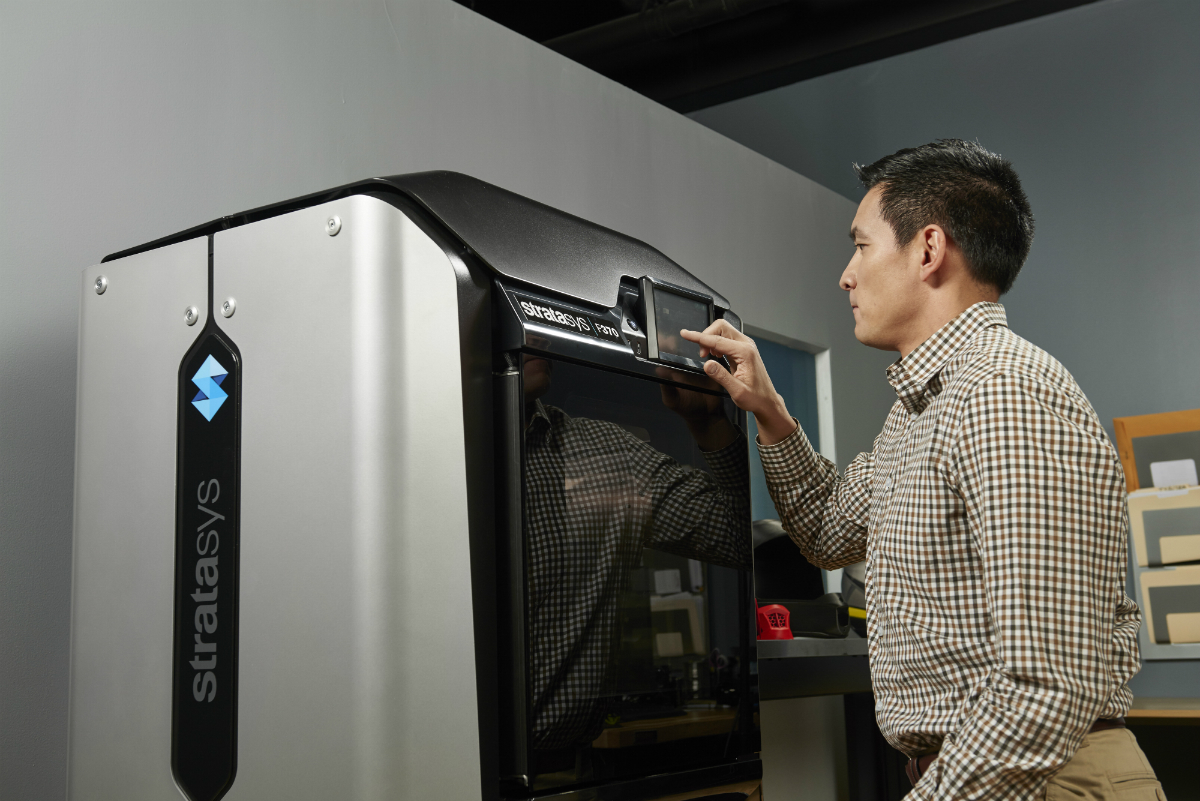 Models in the F123 series feature a touchscreen interface that controls most printer functions. Image courtesy of Stratasys.

Preparing 3D models for print can be the most challenging aspect of the process, but according to Stratasys, the GrabCAD Print software that supports the F123 series alleviates those problems. In addition to STL and VRML files, GrabCAD Print supports native 3D CAD files so users can print directly from Creo, NX, CATIA, and Inventor; a new GrabCAD Print Add-In for SOLIDWORKS was announced as well. The capability to go from CAD model to 3D printer in one step instead of many greatly simplifies a process that “was kind of an eclectic art” in the past, said Carey.

GrabCAD Print can also repair damaged files automatically. “[With this software,] even the most novice designer to 3D printing will find it very easy to get up and running and start printing parts,” Garrity affirmed.

In addition to offering more materials, including PLA, the F123 series promises print speeds that are 25% faster than the Dimension series. In addition, the F123 series debuts a fast-draft mode for evaluating early design concepts that prints twice as quickly as standard build mode and consumes less material. “We’re able to integrate more technology into a single platform,” Carey observed.

To top it off, the F123 line is “cool looking” in comparison to the Dimension models, which is an important consideration for image-conscious design organizations, Carey believes. “All that combined, and I think we’ll see more and more adoption,” he predicted.

With 3D printing capabilities advancing at a rapid clip, some customers may deem it logical to put off a purchase for a while. “We’re not seeing that – we’re seeing things accelerate,” said Carey. “People aren’t waiting; just the opposite.”

That may be due, in part, to an increasingly widespread understanding that 3D printing is a durable technology that offers concrete benefits. Professional perception of the technology is “stabilizing” after being both under- and overhyped in recent years, Carey believes. “People have realized it’s not going away,” he explained. In addition, it’s already familiar to the newest employees in manufacturing and design firms. “There are more and more graduates coming into the market [for whom] 3D printing is their expectation,” he observed.

Carey expects that the trends toward lower costs and expanded capabilities to continue in the future, with new materials and ways to print yet to be discovered. “I still think there’s a long way to go in 3D printing, to be honest,” he said. And as Stratasys makes inroads into the underserved portions of the prototyping market, we’ll certainly see greater diversity among professional use cases. But for the time being, said Carey, Stratasys will focus on addressing the needs of its “fastest adopters” — the aerospace, automotive, and medical industries — as well as educational customers, who are creating the 3D printing users of the future.