Earlier this month, the independent consulting firm Wohlers Associates published Wohlers Report 2017, a review and analysis of the additive manufacturing (AM) and 3D printing industry. (The two terms are often used interchangeably, although additive manufacturing sometimes denotes higher-volume production, such as creating hundreds of dental bridges and crowns for end use instead of one prototype of a part for design verification.) Input for the report was collected from service providers, industrial system manufacturers, producers of third-party materials and low-cost desktop 3D printers, experts, and organizations in 31 countries. This is the 22nd consecutive year that the annual report has been published.

Wohlers Report 2017 states that 97 manufacturers produced and sold additive manufacturing (AM) systems in 2016; this figure is an increase from 62 companies in 2015 and 49 in 2014. According to Wohlers Associates, “This wave of development and commercialization is putting pressure on established producers of AM systems.”

According to the report, the AM industry grew by 17.4% in 2016, down from 25.9% the year before. Much of this decrease in growth came from declines by the two largest manufacturers of AM systems, which together represent $1.31 billion (21.7%) of the $6.063 billion AM industry. “If these two companies were excluded from the calculations, the industry would have grown by 24.9%,” Wohlers Associates stated in a press release.

The “two largest manufacturers of AM systems” referred to here are likely 3D Systems and Stratasys. According to its publicly available financials, 3D Systems reported total consolidated revenue of $633 million in 2016, down from $666.2 million in 2015. This decrease included approximately $20 million of revenue from consumer products that the company discontinued at the end of 2015, 3D Systems reported. For its part, Stratasys reported that its revenue for fiscal 2016 was $672.5 million, compared to $696.0 million for fiscal 2015. (As proof that stock prices do not necessarily reflect profits, 3D Systems’ stock rose nearly 53% in 2016.)

Both Stratasys and 3D Systems are industry veterans (founded in 1989 and 1986, respectively) that have made multiple acquisitions of competitors and complementary technologies along the way. Stratasys merged with Objet five years ago and has acquired companies including MakerBot Industries, Solid Concepts, and GrabCAD; 3D Systems’ long list of acquisitions includes Alibre, Z Corp, and botObjects.

Terry Wohlers, principal author of the report and president of Wohlers Associates, answered the following questions for Cadalyst:

How long do you expect the number of manufacturers in the market to keep increasing?
No one knows. With so much new interest and investment in 3D printing, I expect we will continue to see new companies pop up for some time.

Will we see a shift toward consolidation/fewer new companies anytime soon?
We have seen consolidation already, driven mostly from the acquisition of 50 companies by 3D Systems from August 2009 to April 2015. We can expect to see more from other companies.

Has market penetration/familiarity reached the point that companies involved in product development are beginning to see 3D printing technology as a “must-have” for prototyping, or is it still viewed as more of an unnecessary expenditure/luxury?
It depends on the types of products being developed, but generally, it’s a must-have capability. It’s just not smart to go to market without sufficiently iterating and refining a new design, and 3D printing can help.

What about attitudes around use of the technology for manufacturing?
This is where much of the attention and investment is now occurring. However, manufacturing is an entirely different “animal,” compared to prototyping. The quality requirements are at levels that may exceed many of the current prototyping-oriented 3D printers that are available today. 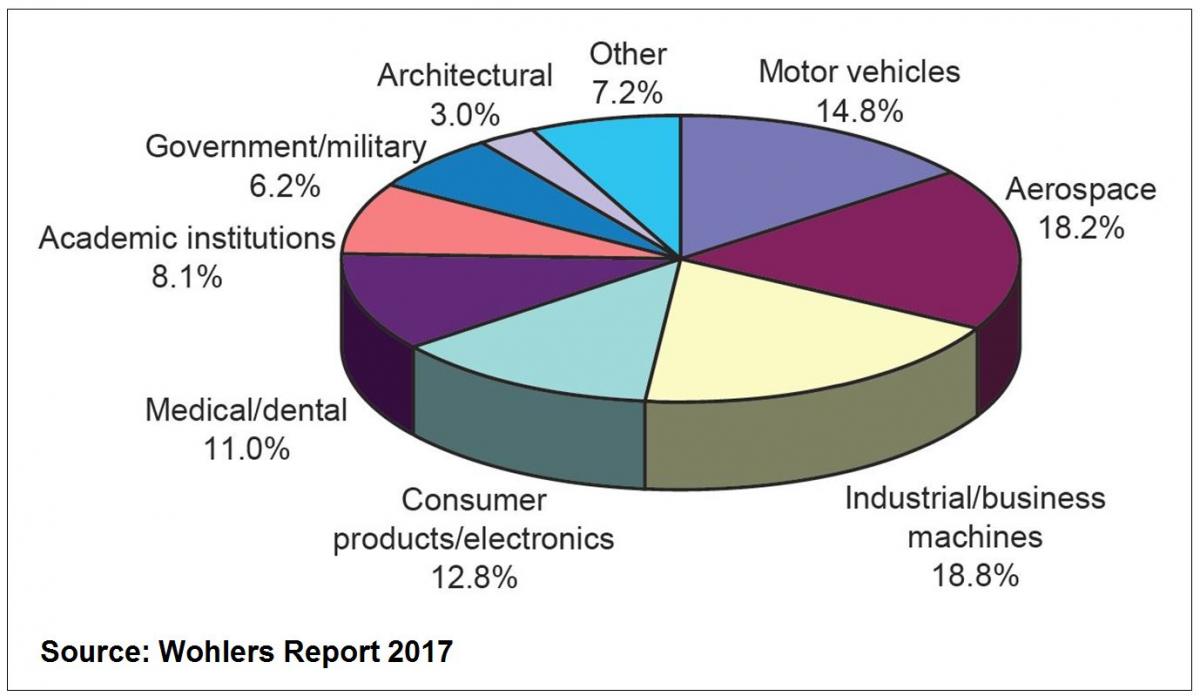 Has this industry distribution changed in the past few years, or do you expect it to in the near future?
In the future, we expect automobile manufacturers to adopt it widely for production applications. First, prices of materials, machines, and services will need to decline, and they will. This dynamic is already under way with all of the new companies, products, and competition.

The 344-page Wohlers Report 2017 includes 28 charts and graphs, 26 tables, and 232 photographs and illustrations. It also includes more than 160 pages of supplemental online information that is available to buyers of the report. A color PDF version of the report costs $495; a bound paper version is available for $595, which includes the cost of shipping.