Zero-Gravity Tests Hint at a Galaxy of Applications

This is a sidebar to the Cadalyst article, "Material Worlds."


When in space, astronauts need to be able to both receive supplies from Earth and to create them as needed. Soon, they may rely on 3D printing to create tools, parts, and structures in that demanding environment.

In July, manufacturing company Made in Space proved that 3D printers can function in zero gravity. The company tested machines including a custom-made model and a modified BFB-3000 from partner company 3D Systems aboard a Zero Gravity Corporation aircraft. The reduced-gravity flights were arranged through NASA’s Flight Opportunities Program. Autodesk was also a partner in the experiment, contributing software and techniques to optimize space-based design principles for practical applications.

Jason Dunn, CTO at Made in Space, said, “Extended-duration human space flights — for example, the International Space Station crew — are completely dependent on Earth. [Recently] we saw why this is not a perfect scenario when the Russian unmanned resupply ship failed to reach orbit.” In addition to responding to emergencies, producing parts on demand can reduce overhead; there’s no need to stock components for every conceivable scenario if you can simply print the perfect item when the need arises.

Made in Space also seeks to optimize the manufacture — and by extension, the design — of spacecraft and structural components. “[Sending an item into space] puts unnecessary constraints on the design, because it must withstand the tremendous loads and vibrations of launch,” said Dunn. “An equally capable satellite, for instance, built in space rather than on the ground could have 30% less structural mass simply because the structure would only have to operate in the zero-gravity environment,” he continued.

Made in Space uses generative design software to develop optimal designs that comply with user-defined constraints, said Dunn. Currently, the company is working on a structural design that is optimized for its strength-to-mass ratio. “The design started as a standard beam, but has evolved into a porous structure reminiscent of the inside of a bone. Because 3D printing builds objects in such a different manner than conventional methods of manufacturing, it is possible to build highly complex geometries with no more effort than building the most standard of geometries. This is a total paradigm shift in manufacturing, one which most of the industry has not grasped just yet.”

Made in Space has plans for further testing, both on and above the Earth. Although the company has focused on printing with extruded plastics thus far, it is investigating ways to adapt metal-based methods for use in zero gravity. And a true suborbital flight, planned for early 2012, will provide the team with more time at zero gravity to evaluate printer performance. 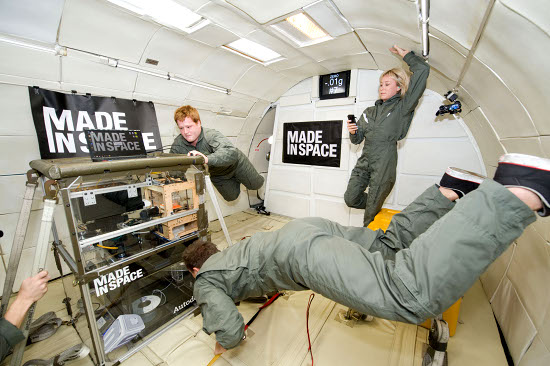 Made in Space is testing 3D printers, including a modified BFB-3000 from 3D Systems, in weightless environments. Manufacturing parts aboard spacecraft as needed offers numerous advantages to space programs. Image courtesy of 3D Systems.