Editor's Note: This sidebar to the article "3D Scanning Is Flying High" was originally published in the Winter/Spring 2011 issue of Cadalyst magazine.

The basic geometrical principle of a fringe-projection digitizer is as follows: A projector and one or two cameras are mounted side by side. The projector generates successive images of fringe patterns using either a halogen lamp and a system of slides or accordion fringe interferometry. The images are projected on the digitized object and captured by the camera. The goal behind this method is to project enough patterns to be able to uniquely decide the projection directions (camera and projector) and to intersect two vectors, one from the projector and one from each camera pixel through the camera lens center. This intersection provides object coordinates for each camera pixel and produces a grid of measured x, y, z coordinates. 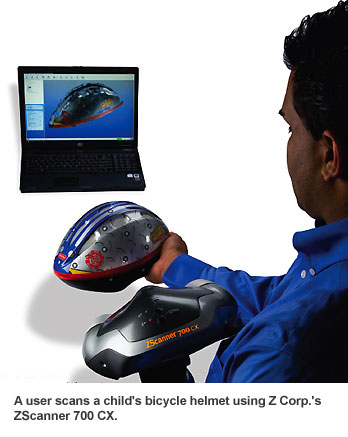 CT allows users to capture a shape that is undetectable by conventional scanners. For example, Xradia Solutions provides 3D x-ray microscopes for high-resolution imaging of the internal structures in samples for industrial and research applications.

For GKS Global Services, a company that manufactures and sells laser scanning equipment, accuracy is the most significant recent advancement in 3D laser scanning. Its most recent tool is a proprietary laser head with optical sensors (essentially two eyes) that collect data simultaneously. If a feature on a part is obstructed, the tool can pick it up from the sensor that is looking at it from the other side. GKS's laser heads can be fitted to portable devices such as a FARO arm or to stationary permanent devices such as a coordinate measuring machine (CMM).

Some years ago GKS discontinued its own development of CMMs and partnered with CMM manufacturers such as Helmel Engineering Products, Wenzel Group, and Carl Zeiss Industrial Metrology, so that it could use existing CMMs and retrofit its own technology for CMM machines to enhance their accuracy and speed.

Scanners now resold by 3DScanCo, a division of Laser Design, include the low-cost Artec, Creaform, and 3Shape 3D models. The Artec 3D scanners use 3D video cameras that capture a 3D image in each frame and combine them automatically into a single mesh. The scanning process is as easy as walking 360 degrees around an object while continuously videotaping. The video-based scanners' measuring speed of as much as 500,000 points per second can be used to scan both moving and stationary objects.

At almost half the cost of conventional scanners, the FARO Focus3D is said to be as easy to use as a digital camera. It uses laser technology to produce detailed 3D images of complex environments and geometries in a few minutes. The FARO portable arm used on site is a tripod on which different laser heads are placed, depending upon the size and requirements of what is being scanned.

NextEngine's 3D scanner sits on a desktop and can capture a million data points in minutes, according to the company. It is perhaps best known for its retail price of $2,995, which includes software for data conversion.

About the Author: Susan Smith