Laser scanning has advanced by leaps and bounds during its relatively short history, increasing the accuracy and ease of a variety of measuring and modeling tasks. Whether you're creating digital terrain models, reverse-engineering car parts, or analyzing crime scenes, there's a laser-based technology that can help.

In architecture and construction, users have embraced laser scanning as a practical solution for collecting as-built data. There are often discrepancies between a building's blueprints and its current form, due either to changes during the original construction process or remodeling and expansion projects. For older buildings in particular, this information may have been lost — or never have existed in the first place.

"Scanning is a rapidly growing field," said Beau Turner, director of business development for IMAGINiT Technologies (a division of Rand Worldwide that merged with Avatech Solutions earlier this year). What's behind the surge in popularity? "A lot more projects are being retrofitted," Turner said, whether it's done to save money, preserve historic buildings, or achieve green design goals such as LEED certification. In the next 10 to 20 years, Turner noted, an estimated 60% of building projects will take place on existing structures.

According to Turner, companies are also attracted to the level of accuracy and the time savings they can achieve compared with traditional survey methods. "With laser scanning, you're looking at a millimeter of tolerance across an entire structure." Improvements in the capabilities of scanning technology are also spurring adoption: "Even a year ago, [the number of points collected for a project] measured in the millions; now it's in the high millions and billions of points."

Turner added that last year, the U.S. General Services Administration (GSA) awarded high-profile, nationwide contracts for laser scanning and BIM (building information modeling) services: "It definitely piqued a lot of people's interest in laser scanning for GSA, the largest landholder out there, to recognize that technology and make this investment."

For users in the building industry, however, exploiting laser-scanning data has often required a great deal of work. Participants in IMAGINiT's beta-test group revealed that they required as many as five software packages to make use of laser scanning data in Autodesk's Revit solution for building information modeling (BIM).

Beginning with a raw laser scan, users register and clean up the data, removing information that is captured outside of the intended target (such as surrounding structures and vegetation). Next, the output of this file is used to generate reference geometry, and each of those files are exported and brought into Autodesk Revit to create entities. These files are output again to compare the original scans against the Revit model for accuracy. Any changes or discrepancies are then communicated and reworked in the original software, and the process continues until the model is complete.

One week ago, IMAGINiT launched a solution to this workflow quagmire: Scan to BIM software, which enables users to import and interact with 3D laser scans in Revit without any intervening steps. The software is designed specifically for AEC firms and 3D laser scanning service providers that use the Revit 2011 platform (Architecture, Structure, or MEP [mechanical, electrical, and plumbing]). 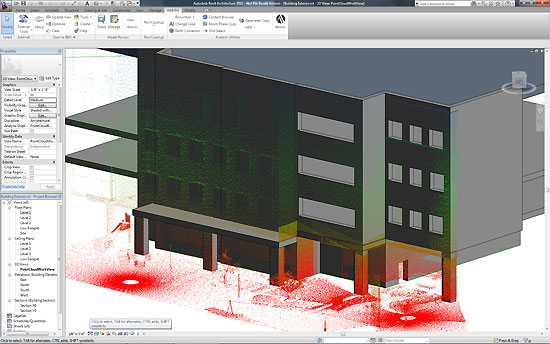 With Scan to BIM software, modeling elements can be created directly from imported point clouds.


Changing AEC workflows with Scan to BIM creates "a huge time savings," Turner said. "[Users] can create that geometry right inside Revit without ever having to leave." In addition to creating native Revit elements — walls, linework, ducts, piping — directly from point cloud data, Scan to BIM enables users to visualize point clouds based on color, intensity, or elevation, and analyze discrepancies by contrasting the Revit model against the point cloud. 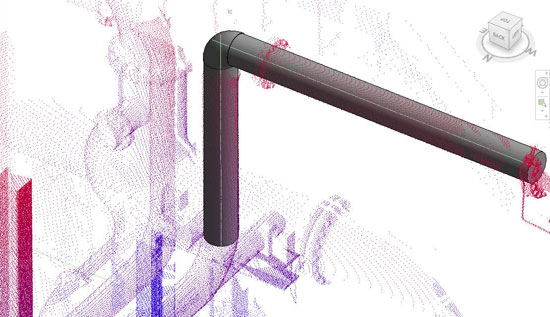 Revit MEP users can generate ductwork and piping from the point cloud with Scan to BIM.

Scan to BIM also can integrate multiple scans in one file, then turn them on and off as desired, like layers. Turner explained that Scan to BIM uses a two-part decimation system to enable responsive data interaction: Users can limit the amount of data they're working with either by isolating one area of the building that they're interested in, or by decreasing the level of detail displayed. "You don't always need 10,000,000 points; 3,000,000 might be all that you need," Turner said.

IMAGINiT expects to release updates of the Scan to BIM software frequently — the first will likely come within the 2011 software cycle — and Turner anticipates ongoing evolution to accommodate larger data sets, new file formats, and other changes in the industry. Referring to the photographic information collected by some scanners, but not yet exploited by Scan to BIM, Turner said, "There are some interesting pieces on the horizon, as scan data can hold so much more value than just an x,y,z coordinate."