For users with less-stringent accuracy requirements, Matterport looks beyond lasers, capturing spaces with infrared instead.


Reality-capture equipment is an increasingly common sight on construction sites, in factories, and at historic buildings. What was once an expensive and training-intensive endeavor — collecting data about elevations, project progress, and existing structures — is becoming more accessible and affordable. The familiar tripod-mounted laser scanners have been complemented by newer technologies, such as drone-mounted cameras, which collect image data for use with software such as Autodesk ReCap or Bentley Systems ContextCapture.

Another recent arrival is the Pro2 3D camera, developed by a six-year-old startup called Matterport. Although it looks similar to a laser scanner, it relies on a different technology: An infrared structured-light sensor works in tandem with an incorporated digital camera to capture real-world locations (typically building interiors). When structured light — a known pattern of light, such as a grid — is projected onto objects, the resulting deformations in the pattern can provide information about object shapes, sizes, and relative locations. 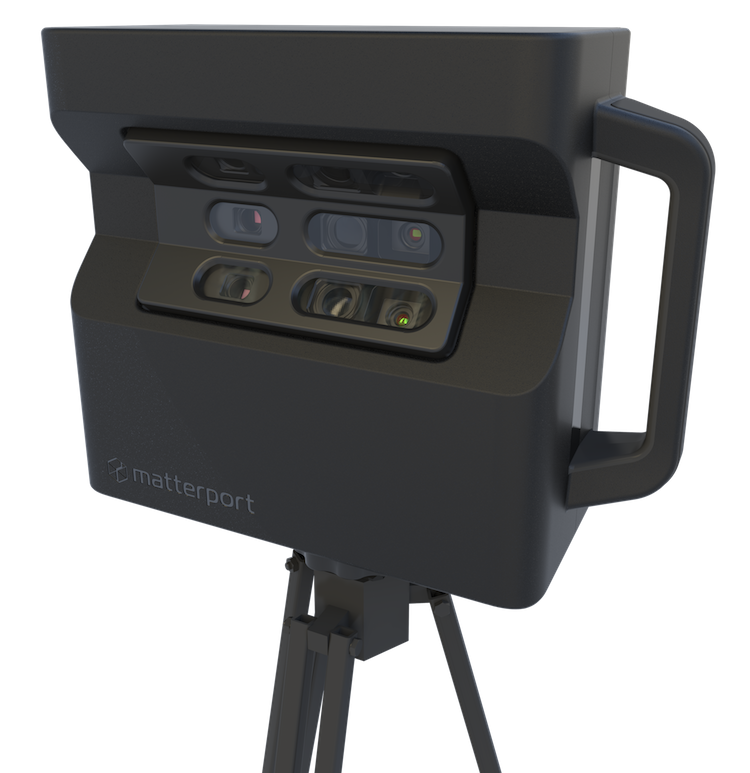 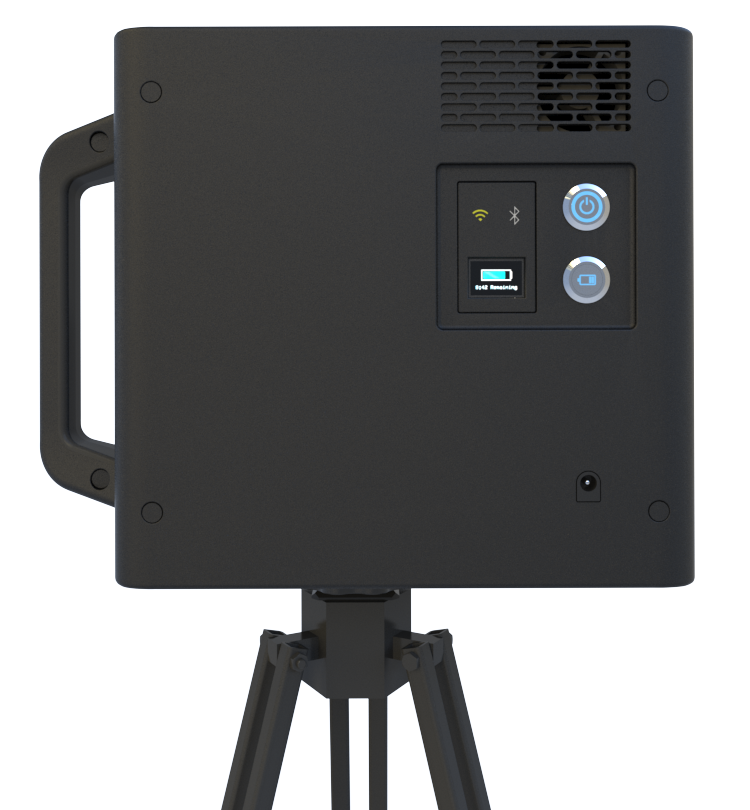 Matterport promotes its system as a low-cost, simple, quick way to visually document built spaces. Both models of the 3D camera, the Pro and higher-resolution Pro2, are priced at less than $4,000. Each capture takes about 1 minute, in contrast to the 5–12 minutes needed with a traditional laser scanner, said Matterport’s Director of Product Management and head of AEC, Daniel Prochazka. A visual preview indicates to users which areas need further scanning. “It takes literally 10 minutes of training, and anybody can use it,” Prochazka asserted.

Matterport sells the hardware and, for an additional fee, processes and hosts the “spaces” — the 3D digital representations of real-world locations. (Local hosting is not an option.) Once processing is complete, users can take 3D measurements from their spaces; generate videos and 2D images; transfer point clouds into Autodesk Revit, AutoCAD, or other applications; and navigate spaces on a desktop or mobile web browser, via Matterport’s 3D Showcase web player, or in virtual reality (VR) through a VR headset that incorporates a mobile phone.

“We are the only company out there that’s putting ‘reality’ in ‘virtual reality,’” said Prochazka. “Every time you scan a location, you can put it in Gear VR, slap it on your head, and walk through it.” 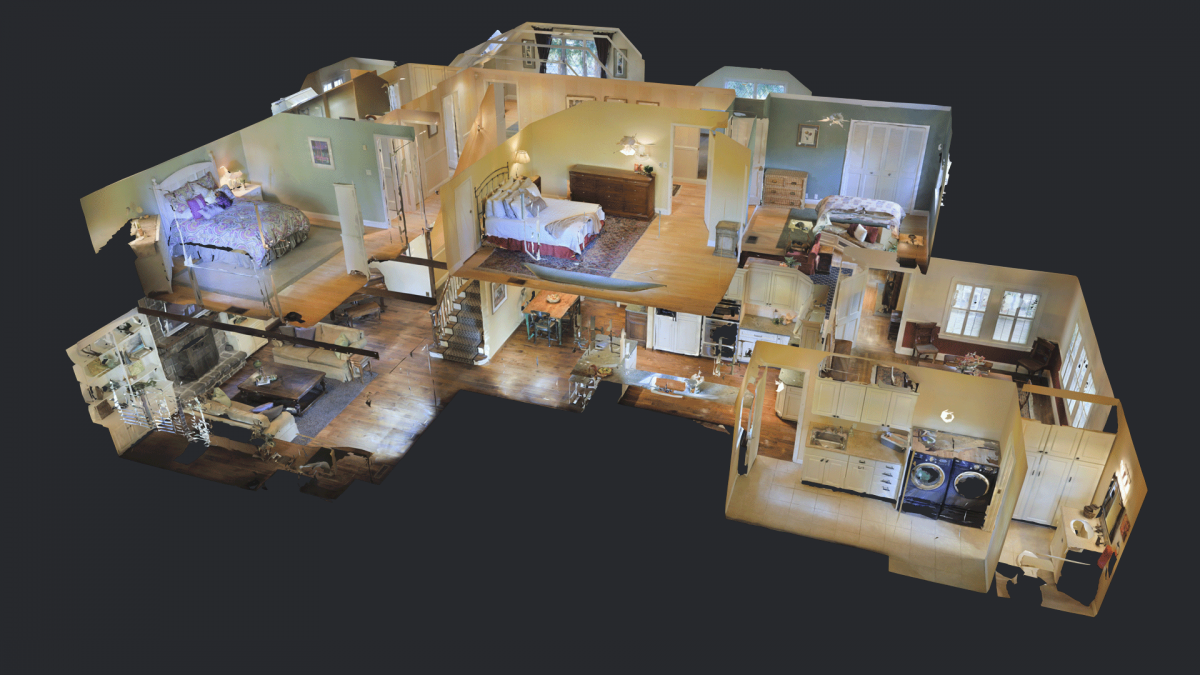 Once scans have been processed, users can explore them via a web browser or a virtual reality experience. Image courtesy of Matterport.

Prochazka was quick to point out that Matterport’s offerings, although more affordable and simpler to use than many laser-scanning options, do not replace them. “There will always be room for laser scanners,” he said, especially since they can provide a higher level of accuracy than Matterport’s 3D cameras. The latter are “accurate within 1% … [the infrared structured-light technology] is not something you can get a lot more accuracy out of,” said Prochazka. While that is “more than accurate enough” for smaller as-built projects, he explained, “in a big warehouse, that could be inches or even a foot off in terms of accuracy” — an amount that may or may not matter, depending on the application.

Moving to More than Real Estate

Matterport started out with a focus on the residential real estate market, and it’s still a new name to many in the AEC world. That’s changing, however. The AEC market now makes up 10–20% of the company’s business, and that number’s growing quickly, said Prochazka: “We’re just scratching the surface of what’s possible.”

According to Prochazka, there are many AEC professionals who like the idea of reality capture, but don’t want to invest substantial money and training time to get started — such as architects in smaller shops, who simply don’t have the resources to get into laser scanning.

Users who currently take measurements manually can replace that time-consuming process with a 3D camera. “Reality-capture workflows are a lot quicker than measurement-based workflows,” Prochazka said. And for these types of uses, a laser scanner may be overkill. “Not everything requires that high level of accuracy,” he confirmed. “For those people, being off by half a centimeter, a centimeter, two centimeters — that’s fine, that’s acceptable.”

Prochazka used the example of a construction company that incorporates Matterport technology in its quality control workflows. By comparing the point clouds it collects to the building information modeling (BIM) model, personnel were able to identify a pipe positioned below ceiling height.

Architects and others can also realize additional benefits from the technology because the resulting imagery and VR experiences double as a marketing and collaboration tool. “[Still images] just don’t tell the story with as much detail and immersiveness as a walkthrough will,” Prochazka noted. By providing frequent documentation of project progress to scattered team members, for example, “you can get everybody collaborating, seeing and highlighting issues remotely and very quickly,” he said.

Documentation that enables facilities managers to “see behind the drywall” after building projects are complete is another area where Matterport expects to see growth in the future. “Keeping [facilities managers] up to speed, QA/QC, updating your BIM … because of the visual nature of our solution, there’s a lot more that can be done with it, instead of a huge collection of images that are not well categorized,” said Prochazka.