VectraFORM Engineering and Solutions is a Creaform Handyscan 3D distributor based in Coimbatore, in the southern part of India. In 2008, the company came across the opportunity to help create a nandi — a sacred bull sculpture — for the Shiva temple of a well-known spiritual foundation. In Hindu mythology, a nandi is a bull that carries the god Shiva and serves as the gatekeeper of Shiva and Parvati. Traditionally, every Shiva temple has a nandi facing the main shrine, and worshippers pray to the nandi first before attending to Lord Shiva.

The Sadhguru, or chief priest of the temple, was keen on the idea of having a sacred bull different from those in existence across India, and wanted it to last more than 500 years. A stone or rock nandi was the first option considered, but the spiritual foundation had previously been disappointed when attempting to build three stone sculptures of Lord Shiva. Those figures were hand-sculpted from drawings and pictures, without the aid of any 3D scanning or CAD technology. The sculptures did not fulfill the original design intent, and furthermore, working in stone consumed a great deal of time and effort.

Because of this experience, the foundation was seeking a more reliable alternative. At this point, the temple project leader visited VectraFORM, and selected the company's services after viewing a demonstration of the Handyscan 3D technology.

To obtain the 3D shape of the sacred bull, the team considered scanning live bulls. After weighing the inevitable difficulties of dealing with live animals, however, they settled on taking pictures of bulls of various ages and studying their characteristics. The best details from various photographs were combined to create an ideal specimen.

Within a month, the temple sculpting crew created a plaster of paris model from the pictures, striving to imitate the position when a bull begins to stand up. This position, with one foreleg extended, indicates that the bull is "recognizing the master before him." The model was built at 1:6 scale, and measured approximately 2' x 3' x 4'. 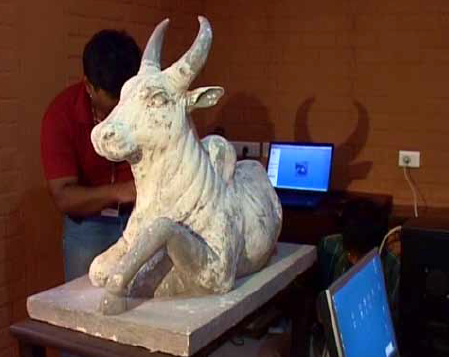 Artisans crafted the first model of the bull sculpture from plaster of paris,
then scanned it with a Handyscan 3D laser scanner.


Once the concept was approved, the project moved to its next phase: 3D scanning of the model. The plaster model was scanned using a Handyscan 3D scanner. The CAD model obtained — once enlarged by six times to its actual size — was used to calculate information such as the weight of the bull when built with various wall thicknesses. 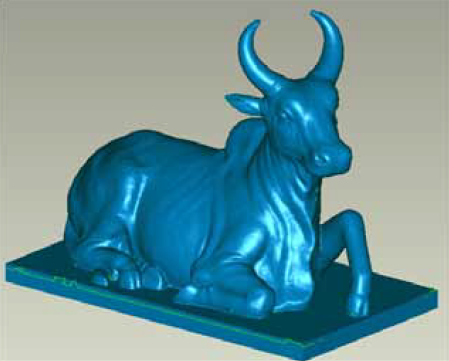 The CAD model of the bull was created by laser-scanning
a physical model.

Although the team edited the 3D scan data from the plaster model with Geomagic and Rapidform — adjusting the hump size, head position, etc. — the results were not satisfactory. The temple priest and the core team preferred to work with a model they could touch, rather than look at the CAD model on a computer screen. VectraFORM considered using rapid prototyping or CNC machining to create a new model that incorporated the CAD changes, but the core team opted instead to make a wax model that could be corrected by hand.

Next, the team made a wax replica of the plaster model, and modified it by warming select areas to make adjustments. The final wax model was then scanned using a Handyscan 3D handheld, self-positioning laser scanner. Once the optimal laser power and aperture time settings were determined for this particular surface, the scanning process required about five hours of work, plus sixteen hours of post-processing to assemble the various scans.

The team used Creaform VxScan to export the STL file in binary format, and imported the model into Rapidform 2006 and Geomagic 9.0 for processing and assembly. Geomagic and Rhinoceros were used to convert the data into STL format, and later into full-scale 2D drawings. After the data was imported into Rhino, it was divided into parts. The individual parts were cut into 100-mm layers for designing the 16-mm rebar frame of the final sculpture (except the head, horns, and ears). Then 2D drawings were printed from Rhino using 8'-wide vinyl printers to actual scale (1:1). 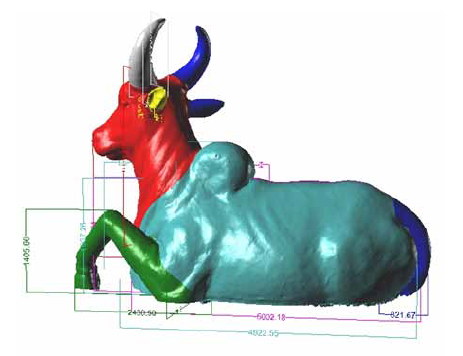 
Since the physical model's underside wasn't scanned, the CAD model was filled using the post-processing software to make it watertight. Then it became possible to calculate some critical data, such as the bull's surface area.

The initial plan was to cast the bull's entire body, but the team faced obstacles such as a limited number of technical foundries within the region, as well as a limited budget for the project. In addition, the chief priest preferred to make the metal sculpture by manual labor instead of with automated tools. Ultimately, the team decided to have the head cast, and the body manufactured using mild sheet steel to ensure good quality and maximum lifetime for the sacred bull. The 2D drawings and design prepared with 3D scanning enabled the fabrication team to adhere to the original intent as expressed in the wax model.

To simplify manufacturing, the sections were taken on a single plane (xy, yz, or xz) that were prepared using manual methods. The skeleton was completed in parts, and was composed of 16-mm rebar rods mounted on a 50-mm L angle on the outer edge, and in the inner areas to reinforce the frame. Before draping the 8-mm mild steel sheeting onto the skeleton, the team put all the parts together to check whether they fit — which they did. 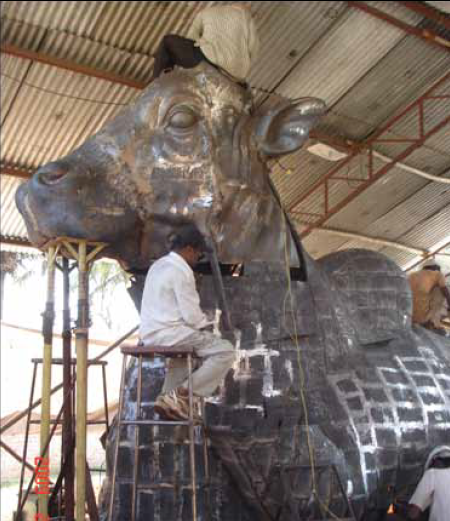 Workers fitted the bull's sheet-metal "skin" over a skeleton of rebar.


However, the most important piece was still missing. Manufactured in a location 500 km from the temple site, the head was CNC-milled from polystyrene foam, then invest-cast so that the features perfectly matched the CAD model. The head was cast in seven pieces, which were welded and assembled on-site. Supporting bars were used to help compensate for the deformation or warping of the castings, and a 100-mm buffer zone had been planned in anticipation of the head and torso assembly. This way, it would still be possible to join the two even if slight dimension variations existed between the manufactured skeleton and the cast head.

The sacred bull was inaugurated before 250,000 people by the Sadhguru of the temple in February 2009. The temple team met their goal of honoring their deities with a realistic, long-lasting statue, while attracting more worshippers. 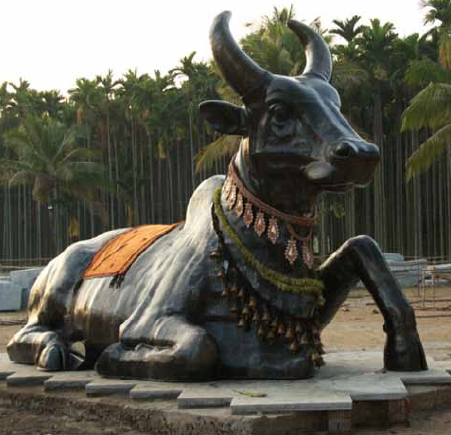 The highly accurate data obtained from the models by laser scanning
allowed for very detailed and realistic rendering on the full-size
metal statue, which measures 12' tall and weighs some 20 tons.

About the Author: Isabelle Roy