Coming soon, the device aims to meet the needs — and overcome the mouse-related frustrations — of CAD users.


3Dconnexion today introduced the 3Dconnexion CadMouse ($99), said to be the first mouse designed specifically for CAD professionals. Available by the end of February, it is designed to address the frustrations that CAD users experience with an ordinary mouse. 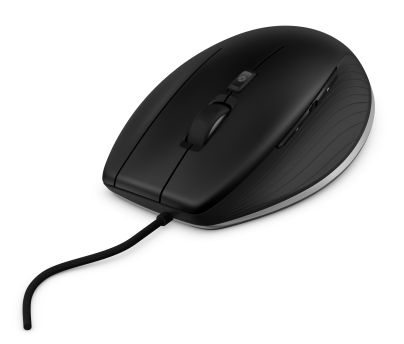 The 3Dconnexion CadMouse is said to be the first mouse
designed specifically for CAD users.

“We took the time to understand what [CAD users] needed before developing a combination of smart hardware and software features,” says Antonio Pascucci, vice-president of products at 3Dconnexion, the company known for its SpacePilot, SpaceMouse, and SpaceNavigator 3D navigation devices.

Front and center on the ergonomically designed CadMouse, which measures 5” x 3.15” x 1.7”, is the dedicated, full-size middle mouse button (MMB). Facilitating various functions depending on the application, the MMB is almost uniformly a time-saver. On a traditional two-button mouse, the scroll wheel serves as the MMB — fine for casual use but uncomfortable and potentially injurious if you’re a CAD user clicking it thousands of times every day. The traditional three-button mouse lacks the scroll wheel all together. Older mice also lack the precision to support today’s large- and multi-monitor CAD stations.

The new CadMouse pairs the dedicated MMB with the patent-pending Smart Scroll Wheel, which offers automatic scroll wheel performance (depending on the active application) that recognizes when to activate precise “click-to-click” zooming (in CAD applications) or fast scrolling (in browsers and documents).

Other notable features include:

Access to all features of CadMouse, including QuickZoom, Smart Scroll, and radial menus, requires the 3Dconnexion 3DxWare 10 driver, the same unified driver that supports existing 3Dconnexion products. Users can customize and optimize all 3Dconnexion devices via one interface. These features also require specific CAD software “profiles” developed by 3Dconnexion. Currently, all CadMouse features are available to users of SolidWorks, Inventor, CATIA, Pro/ENGINEER and Creo, AutoCAD, NX, Solid Edge, SketchUp, 3DxViewer, 3ds Max, and Maya. As users demand support for other CAD applications, the company reports it will develop profiles accordingly. Profiles for Revit, Navisworks, Rhino, and BricsCAD are said to be in the works.

CadMouse is available only in a wired, right-handed version. Although 3Dconnexion has left the door open for a wireless option, for now the wired version addresses common IT concerns related to security, sensor precision, and battery use — and it suits the needs of the majority of 3Dconnexion customers, who are accustomed to working with wired input devices. No plans exist to develop a left-handed version, the company reports.

3Dconnexion customers typically work with a 3D navigation device in the left hand for positioning objects and views 3D models, and a traditional mouse in the right hand for moving and clicking the mouse cursor. “The icing on the cake is that CadMouse enables a new level of two-handed power for our current customers,” says Pascucci, citing the features of CadMouse that deliver benefits not available in traditional mice.

The full range of CadMouse features will be supported by the Microsoft Windows 8, 7, and Vista operating systems. CadMouse comes with a two-year warranty and will be sold worldwide via professional CAD resellers, online resellers, and the 3Dconnexion Shop.