With the introduction of three new monitors, the hardware developer adds a new branch to the Z family tree.


HP added an entry-level model to its Z workstation family this week, and simultaneously announced three Z displays. The company introduced its first Z workstations in 2009, and has been regularly expanding and updating the line ever since. This is the first time, however, that displays have been made part of the Z offerings.

The displays also provide color fidelity across wider viewing angles than twisted nematic (TN) displays do — an important feature for those viewing images from the side. "TN degrades depending on the angle," said Mahoney. The IPS Generation 2, in contrast, provides 178 degrees of clear viewing.

The HP Z22i and Z23i provide 95% coverage of the sRGB color space; the HP Z24i boosts that number to 99%. HP's Black Stretch technology, controlled through an onscreen display, enhances the visibility of details in dark regions of the image.

The 21.5-inch Z22i, which Mahoney suggested for MCAD applications, and the 23-inch Z23i, which he called "ideal for CAD and AEC," share similar features: 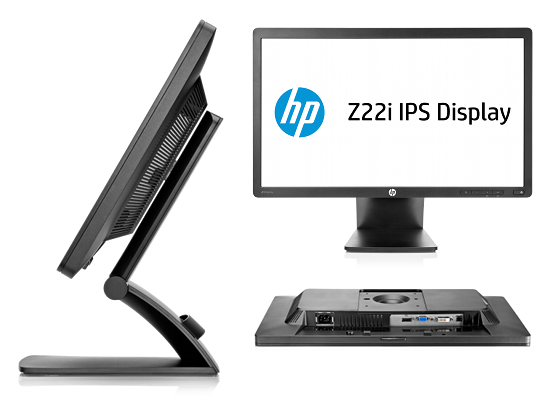 Like its siblings, the Z23i and Z24i, the Z22i has a stand that allows users to elevate, tilt, and swivel the display, as well as rotate it to portrait position. Images courtesy of HP.