It's Time for a CAD Monitor Makeover

Herrera on Hardware: Are your desktop displays doing all they can to maximize your productivity?


The secret's out on the benefits of multiple displays for CAD users. The old standard of a professional workspace built around a single monitor has faded; today the dual-monitor desktop is the rule rather than the exception. But it took a while for the transition to take hold, and it's not clear why, since a multidisplay setup has such a significant and immediate impact on user productivity. Ordinarily, professionals are quick to adopt most any technology that offers as compelling a return on investment as dual displays do.

It might be that advancements in display technology tend to sneak up on us, because they're not often in the spotlight. Some other computing technologies — such as processors — receive a larger share of attention from the media and marketers because they boast a shorter development cycle or more glamorous reputation. And when it comes to shopping for new hardware in the hopes of shrinking our schedules, we focus almost exclusively on what new central processing units (CPUs), graphics processing units (GPUs), dual in-line memory modules (DIMMs), and solid-state drives (SSDs) can offer, with the goals of shortening compute or render times.

While those components are of course critical in creating an optimal CAD workstation, it's worth remembering what visual creatures we are. Sight is our most powerful sense, and the more we can see, and the more clearly we can see it, the more we'll get done. And that's a conclusion that anyone who's jumped from one to two monitors will enthusiastically affirm.

Most eyes care a lot about pixel density, which indicates how closely packed pixels are in a display. The higher the density, the better the image, but only up to the point our eyes (or most eyes) can distinguish the difference. Given how far most eyes are from desktop displays, we can reasonably translate optimal pixel density (i.e., good enough without overkill) to optimal pixel resolution for a particular screen size. Most would prefer as big a screen as our deskspace can accommodate, but the bigger the display, the higher the resolution you'll need to satisfy your eyes' affinity for tight pixel density.

Fortunately, resolutions have risen dramatically, while prices have dropped. Today, prices are just too low to choose anything smaller than 23" at Full HD (1920 x 1080) resolution; a good balance for most applications and budgets would be 25" Full HD. For monitors bigger than 25", low pixel density may become an issue, inviting consideration of higher resolutions such as 2560 × 1600 or 3440 x 1440.

If you have very particular eyes or a project with very stringent demands on visual precision, you'll want to consider moving up from Full HD , even at smaller display sizes. And especially at larger screen sizes, you can now skip the compromises altogether and step up to 4K displays (also known as UHD, 3840 x 2160). Just make sure your graphics card can support 4K — an increasing number do, but not all.

More screen real estate provides a bigger boost to productivity than you'd probably expect. We've all experienced it going from one to two. But why stop there? At this point, you'd need a good reason to argue not going to three ... at least. With 23" (or larger) Full HD (or better) screens so inexpensive, and with virtually all workstation GPUs supporting three, only the limits of your desk should stop you from using three. 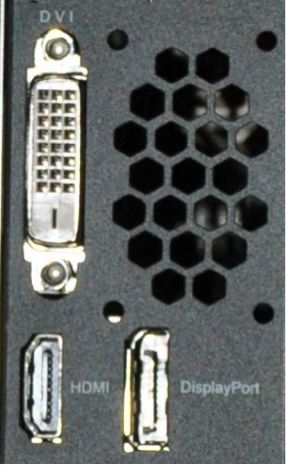 Higher-end GPUs can push even further, making four- or six-display environments feasible. Helping out the logistics of abutting and aligning more displays are two trends: Video Electronics Standards Association (VESA)-standard mounts and thin-bezel designs. Multidisplay stands now come in a wider range of sizes and orientations (with VESA-standard mounts ensuring compatibility), and vendors such as HP are minimizing bezel widths for a cleaner "edge-to-edge" visual experience.