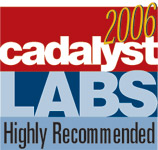 ViewSonic just released the VP2330wb LCD monitor featuring a 23" color TFT active-matrix panel with WUXGA resolutions and an optimum resolution of 1920x1200. With a thin bezel that's only 0.85" wide, the VP2330wb is suitable for stacking and tiling to produce large display walls.

The design is attractive and features a stand that provides pivot, height and tilt adjustments with 270-degree swivel. Vibration is often a problem with large LCD displays that pivot to a vertical (portrait) orientation, but the VP2330wb was stable in all configurations tested. It's easy to detach the base to expose the VESA wall-mount interface.

The ViewSonic VP2330wb display offers 250 cd/m² brightness and an 800:1 contrast ratio. Gray-to-gray response time is 8ms, and black-to-black is 16ms, which is fast for a display panel this large. The image was stable, with no sign of flicker.

We ran the monitor through its paces with DisplayMate software, our usual testing suite for CRT and LCD monitors. We hooked the VP2330wb to a Dell Precision 280 workstation that included an NVIDIA Quadro FX 3450 graphics card, with Windows XP Professional installed. We used NVIDIA WHQL-certified driver v77.56 for testing.

All test scores were perfect, with smooth gradations and very clean and neutral grays. Magenta and red were slightly intense, but not significantly so, and yellows -- often a difficult color for LCD panels to produce -- were clean and clear. The displayed image was stable and visually appealing, with good brightness and contrast. An excellent on-screen menu provides an interface to an extensive set of controls and adjustments. The menu is easy to use,

The ViewSonic VP2330wb comes with PerfectSuite LCD control software, which features color calibration, asset management, theft deterrence and automatic screen rotation. Although the VP2330wb supports Windows and Macintosh systems, the PerfectSuite software and the pivot function are not supported on Apple computers.

Connectivity options include both 15-pin D-dub and DVI-I connectors. Good USB connectivity is provided by one upstream and four downstream USB 2.0 ports. ViewSonic provides an external power adapter/transformer, rather than incorporating that into the display.

The ViewSonic VP2330wb carries a three-year limited warranty on parts, labor and the backlight. Its estimated street price is $1,149, in line with other large-panel LCD monitors.

With its excellent display characteristics, extensive control capabilities and reasonable price, the ViewSonic VP2330wb deserves Cadalyst's Highly Recommended rating. There's great depth of features and a lot of attention to detail and usability to be found here.