The new flagship of AMD’s professional GPU offerings is part of the company’s effort to diversify its customer base.


This week, AMD launched its FirePro W9100 professional graphics processing unit (GPU), intended for use in workstations running design, engineering, and video production applications. The new release is based on the Graphics Core Next GPU architecture, which is designed to balance compute and 3D workloads.

During a March webcast previewing the release, Matt Skynner, corporate vice-president and general manager of AMD’s graphics business unit, explained that AMD is undergoing a transformation of its market strategy. The goal (as illustrated in the AMD presentation slide below) is to transition away from a heavy emphasis on traditional PC solutions toward a balance with high-growth markets, including professional graphics. 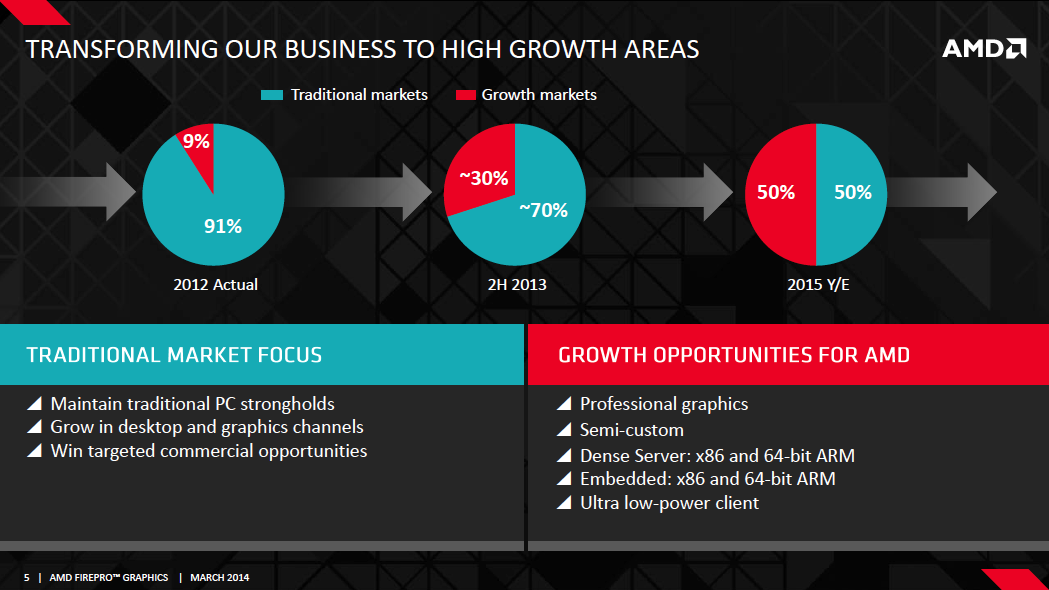 “Professional graphics is a major growth item for AMD,” Skynner noted. It’s also a stronghold for fellow GPU developer NVIDIA, and AMD is positioning the W9100 as its response to its competitor’s top-end GPUs for desktop workstations, the Quadro K6000 and K5000.

“Technologies are changing, demands from professional users are changing; we’re entering a new era of visual supercomputing for workstation professionals,” Skynner continued. The two drivers of this new era, he explained, are Open Computing Language (better known as OpenCL), which “allows developers to harness the power of the GPU to do more,” and 4K displays: “four times more pixels means you need more graphics horsepower, so 4K is a huge driver.” (Ultra-HD displays, commonly called 4K displays, have a resolution of at least eight million active pixels, including at least 3,840 horizontally and 2,160 vertically, as defined by the Consumer Electronics Association.)

The W9100 is “designed and optimized for real-time 4K,” said AMD General Manager David Cummings. And with its six Mini DisplayPort 1.2 outputs, the W9100 can support as many as six 4K displays.

Roger Kaduri, AMD vice-president of visual computing, noted that creators want “more of everything”: they don’t want to be curtailed by memory capacity, memory bandwidth, or compute limitations. Kaduri stressed that the W9100 can improve the design, visualization, and simulation stages of the product design workflow, enabling users to work with large assemblies and data sets, load very dense models into memory, and create photorealistic renderings quickly. 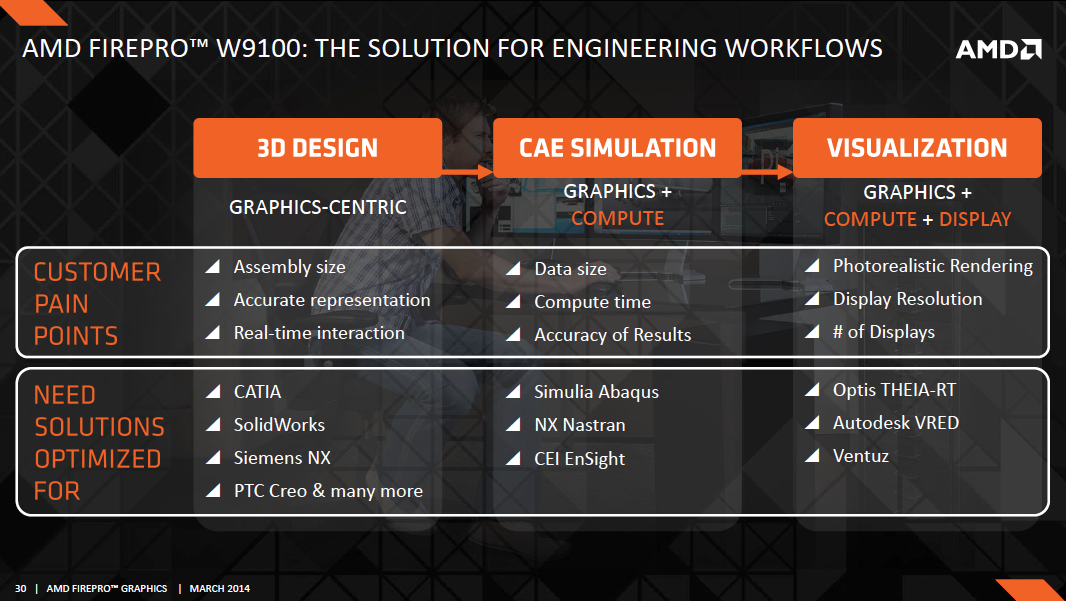 In addition, the option to work with multiple displays simultaneously provides the flexibility to view different aspects of a product, he said.

From GPU to Workstation

AMD FirePro Ultra Workstations are available from a dozen AMD partners, including BOXX Technologies and Supermicro.