The Future of CAD Graphics

Viewpoint: The industry veterans heading Jon Peddie Research weigh in on the relationship between CAD software and graphics hardware, integrated and discrete options, and the role of the cloud.


Jon Peddie Research (JPR) is a name familiar to many who work with computer graphics hardware or software. The marketing and consulting firm publishes reports on the CAD, graphics hardware, and gaming markets, as well as the GraphicSpeak site for CAD and digital content creation professionals.

JPR President Jon Peddie and Vice-President Kathleen Maher have more than a half-century of computer graphics experience between them, giving the duo a rare perspective on the history of the technology — and its likely future.

“When you talk about basic CAD, you’re just drawing lines, which is the simplest thing in the world for a computer,” said Peddie. The real complexity of CAD lies instead in the database management and attributes associated with the drawing. The addition of a third axis makes 3D modeling a bit more difficult than 2D, but most modeling processes do not involve parallel operations, which is where the power GPUs really shine. Tasks such as rendering, simulation, and analysis can take advantage of GPUs.

“People need graphics processors if their workload includes rendering, analysis, database processing, encryption, data conversion, etc., and their software has been optimized to take advantage of graphics processing units (GPUs),” said Maher. “A look at the machine requirements for your software will tell you if your system workflow will be improved by the addition of a GPU.”

The core engines of many venerable CAD applications, such as AutoCAD, have gone largely unchanged since they were introduced decades ago, she explained. “They took advantage of math processors, which became integrated into CPUs from Intel, AMD, PowerPC, and Cyrix in the late ‘80s. The ability of processors to take advantage of threading was not common, and at that time GPUs were being developed for specialized tasks such as arcade gaming.

“Since then, not much has happened in the development of the core code engines, because it would mean crawling through the programs and re-writing them and introducing incompatibility in the installed base. Rewriting code to take advantage of threading — and later, multiple processors (dual-core, quad-core, and now eight-core) — was not easy, and it did not always affect performance substantially enough to risk alienating the user base. Software developers have had to pick their fights.”

Peddie, who is very bullish on the potential for GPUs, added, “Now, we’re at the part where the software companies are holding the [graphics] industry back.”.

Code is typically updated modularly, Maher noted, as a company updates a particular module of its software, which will benefit from multi-processor architectures.

“Even though the core code of the major CAD tools have not changed significantly, it’s not really accurate to say the programs haven’t changed over the years,” said Maher. “Capabilities such as rendering have been added, changed, and improved; simulation and analysis have become increasingly important in the basic package; and processes that can populate changes across a model are all examples of processes that can take advantage of parallel processing.”

Who Needs a GPU?

The question of which users can benefit from GPUs is not black-and-white — or static. The most important factor to look at is workload. As CAD products have matured, Maher observed, more and more of those graphically demanding tasks such as rendering are being performed by a broader selection of users, both as they get more proficient and as CAD products add new capabilities and ease of use. A worker that didn’t need a GPU in the past, for example, may now be working on renderings part of the time, or doing more simulation.

Many CAD-using companies invest a little more to have workstation-quality GPUs instead of slightly cheaper alternatives like gaming cards, in every instance, because their CAD certifications provide an assurance of optimization, reliability, and security. “[Larger companies in particular] can’t afford to have a project stopped or slowed down because some part of the workstation isn’t working properly,” said Peddie.

There are, however, plenty of people who work with CAD in ways that aren’t design-heavy; their graphics demands are so relatively simple that they can use integrated graphics without noticing any limitations at all.

Although integrated graphics have their place, Peddie calls the idea that they are “catching up” to the performance of discrete cards “an absurd bit of convoluted logic.” Because both technologies are improving at the same time, integrated graphics cannot close the gap. “Integrated graphics are now getting to where GPUs were 5 years ago,” he said. 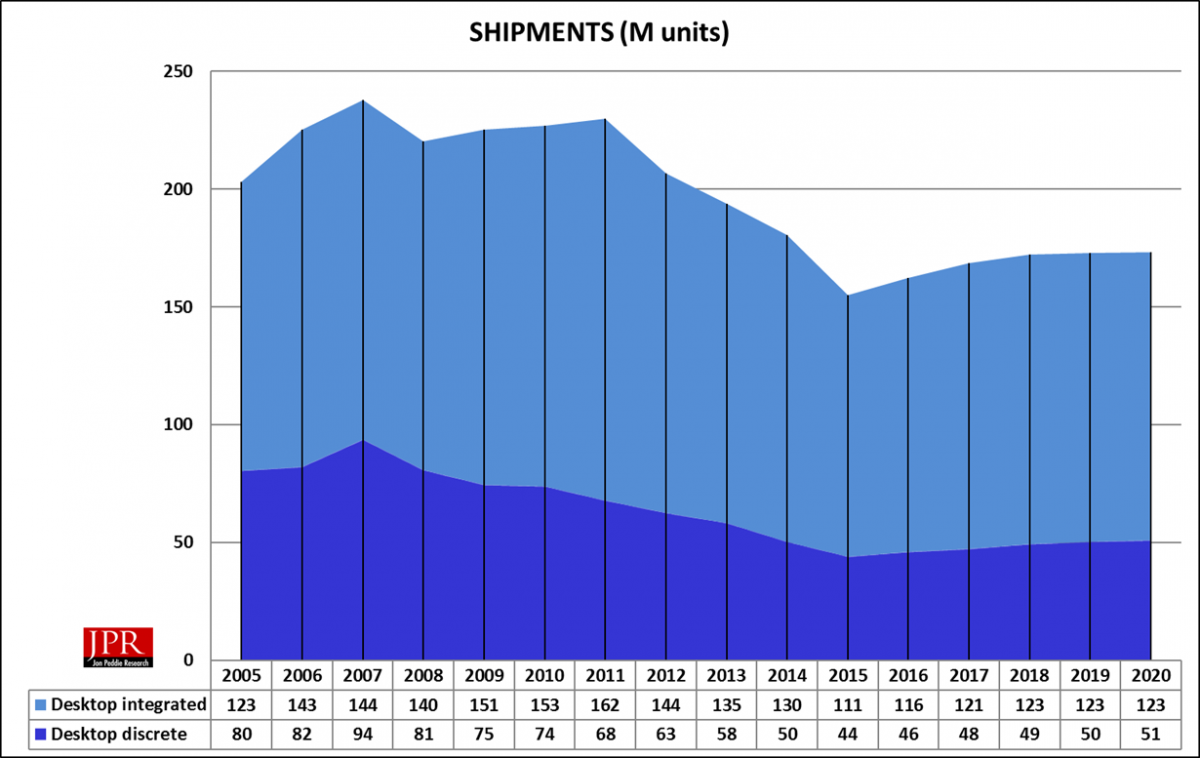 This graph from Jon Peddie Research depicts the number of desktop workstations shipped with integrated graphics versus those incorporating discrete graphics cards, as well as precdictions for the future.

We’re currently undergoing a huge shift, said Maher, as information for CAD designs is increasingly stored in giant databases in the cloud, not in a local file. All users can access up-to-date information that’s maintained consistently, and do so with a very lightweight computer. “Once they’ve lived that life, they won’t go back,” she predicted.

That doesn’t mean that all CAD offerings will become cloud-only starting immediately, however. “Someday, there will be choices [in software platforms], but people won’t want them — they will have migrated themselves [to the cloud],” Maher continued.

The cloud offers more than just a better way to do the same old thing, Peddie and Maher believe. “There is now the potential for brand-new software taking advantage of thousands of processors,” said Maher. “It’s an opportunity for new, upstart companies to challenge established companies that have been relying on old code.

One of the most important technical advances to move technology forward is the development of WebGL, a variation on OpenGL that enables online code to take advantage of hardware processing. It has been developed by companies working together within the Khronos Group, and engineers from Mozilla and Google Chrome are leading the development. WebGL is enabling companies such as Fra.me, Clara.io, 3DTin by Lagoa (acquired by Autodesk in 2014), Autodesk Fusion 360, and OnShape to offer powerful programs that work within a browser. As the companies in Khronos improve WebGL, we will see more powerful programs offered online. It’s a little like turning the crank back when processors got faster by improving the clock speed.

And with the imminent arrival of WebGL 2.0 — expected by this summer — Peddie and Maher see benefits from hardware acceleration on the horizon.