Early demos I saw were promising, with Nvidia and partners clearly paying close attention to end-to-end latency. Still, I wanted to see it in action, without being run on any specially constructed (and potentially expensive) wide-area network (WAN). Well, I got to do just that at GTC, and I came away even more optimistic about the prospects for remote visualization for CAD professionals.

In a meeting with Nvidia’s general manager of Manufacturing Industries, Andrew Cresci, any skepticism I had about GRID's ability to support interactive visuals faded away. Andrew pulled out his laptop, accessed the San Jose conference hall Wi-Fi, and proceeded to log in to a GRID server in Tokyo. I was blown away by the snappy response, as he called up a couple of 3D models and rotated and zoomed in and out in real time. I noticed no significant lag in response as he manipulated a model located half a world away — over a basic, public network, no less. It’s no surprise that, according to Cresci, many major CAD/CAE installations (e.g., automotive) are currently evaluating GRID with trial installations. 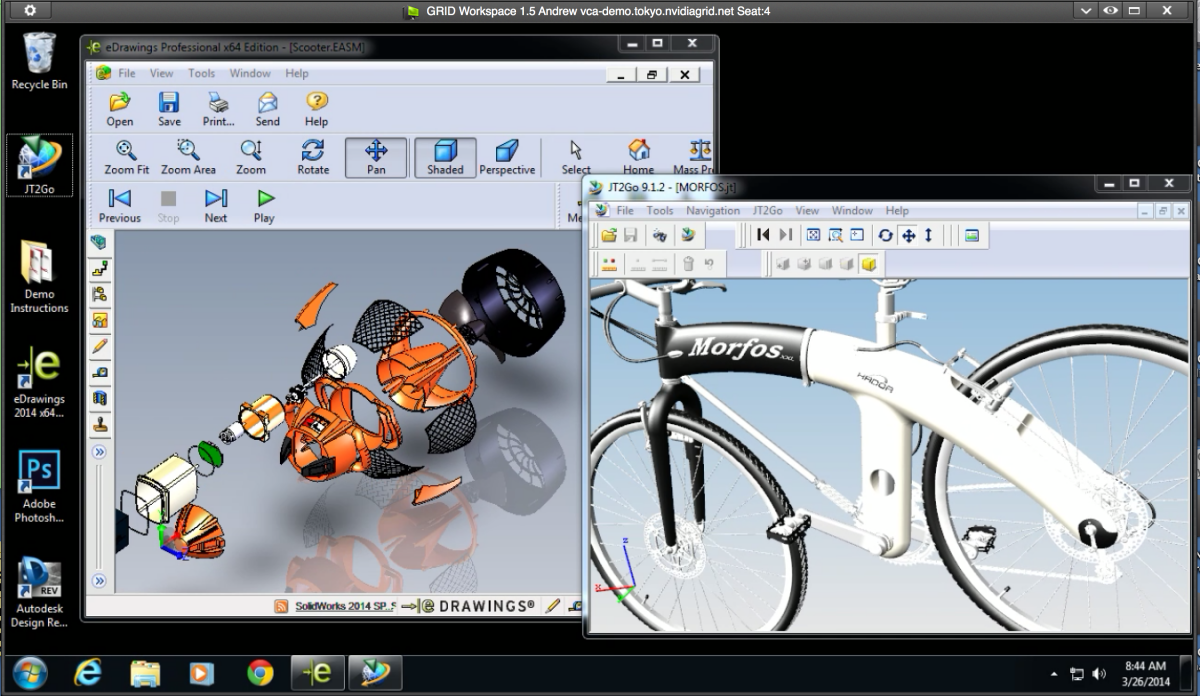 A screenshot from an impromptu login to a Tokyo-based GRID server from San Jose, California.


Next-Generation GPU Horsepower on the Horizon

Nvidia’s technology plans sure look like they’re cut out for CAD: GPUs holistically accelerating multiple phases of a modern CAD workflow, and virtualized GPUs to extend VDI and cloud benefits to the workstation and product lifecycle management (PLM) user base. If your computing concerns revolve around CAD, that’s all good news.

But of course, while the concept and all the supporting infrastructure are essential to the final solution, ultimately the extent of the benefits will come down to good, old-fashioned GPU horsepower. Nvidia knows it, and their GPU roadmap reflects it. At GTC, the company unveiled its next generation of GPU, Pascal (taking the place of what the company had previously referred to as Volta), expected out in 2016. With Pascal, the company is promising a leap in performance per watt of nearly an order of magnitude over this year’s Maxwell (a GPU that should appear in the company’s professional-geared Quadro products in the next few months).

From Fermi to Pascal: Nvidia's GPU line over the history of the GTC.


A Strategy That Dovetails with CAD Demands

Wall Street categorizes Nvidia as a growth company, and in order to stay that way, the company knows the existing market for GPUs isn’t enough. That belief is what’s driving its investments and development initiatives, as I saw at GTC.

Fortunately, the areas Nvidia's targeting for market expansion turn out to map quite well into the needs of the CAD community. For example, its support today for convergence in simulation and visualization technology makes for a compelling, cost-effective proposition: the same GPU that renders models can now accelerate engineering analysis as well.

Tomorrow, the playing field for GPUs in CAD should only expand. After all, while many computing markets today are nearing or at the level of “good enough” performance, CAD isn’t. The thirst for compute power to improve both visualization and analysis is insatiable. And when it comes to quenching that thirst, Nvidia wants its next-generation GPUs to be the solution professionals reach for first — ideally, exceeding the demand for a next-generation CPU. With what we’ve seen at this year’s GPU Technology Conference, the company’s making substantial progress on its quest to do just that.