Event Report: NVIDIA is not alone in pursuing virtual workstation technologies, which promise to make large projects available at any time to team members around the globe.


Will 2015 Be the Year of the Virtual Workstation?

NVIDIA's promotion of its GRID technology, as well as the virtual workstation platform it supports, has grown louder over the past few years. With GRID, NVIDIA is aiming to push server-side computing and graphics delivery (first and foremost via virtual desktop infrastructure, or VDI) to serve a desire — and for some, an urgent need — to better manage growing IT challenges imposed by large model databases, tighter security, and a workforce that is increasingly scattered across locations and time zones. The past year in particular has seen a great deal of momentum on that front, for example as outlined in the three-part Herrera on Hardware series, "Is Cloud-Based CAD Ready for Prime Time?" 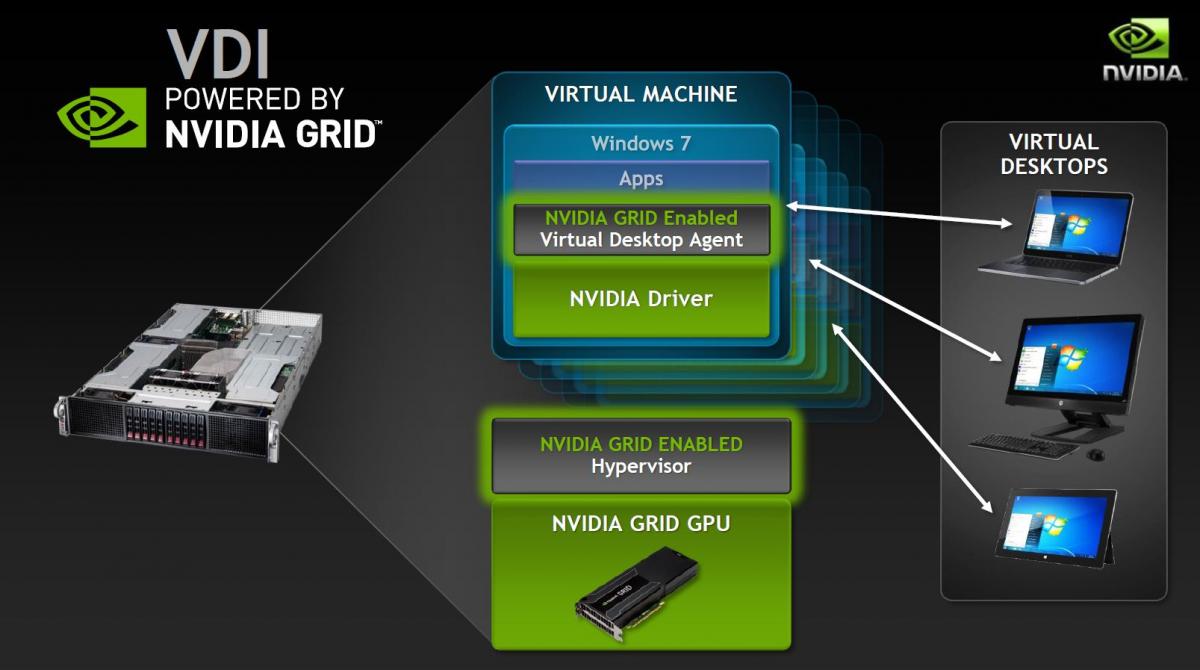 VDI with high-performance graphics: a solution that moves workstation computation and rendering from the desktop to the datacenter. Image courtesy of NVIDIA.


At GTC 2015 that volume hit a crescendo, as NVIDIA got several more critical ducks in a row for its GRID solution. With a complete supporting ecosystem in place, NVIDIA has set the stage for what should be a steady increase in the adoption of virtual workstations across professional markets, and the CAD space in particular. First and foremost, the company announced general availability of GRID vGPU support in VMware Horizon and vSphere 6. Given that about four-fifths of VDI deployments run on VMware's Hypervisor, the company's support for virtualized GPU (vGPU) support in GRID is the most critical linchpin toward achieving mass-market acceptance. Citrix was already on board with vGPU, so NVIDIA now has a very large sandbox to play in.

Dell was also on hand, announcing a new server platform for running GRID-accelerated VDI, complementing a now wide range of options from both itself and other big original equipment manufacturers (OEMs), including HP, Cisco, and SuperMicro. This particular option, the Dell Precision Appliance for Wyse, is labeled an "appliance" rather than a "server," and that reflects Dell's intent to make it as simple to implement as possible. Preloaded with NVIDIA Quadro, GRID K1 and K2 cards, and VMware virtualization software, the Precision Appliance for Wyse can be plugged in to serve up virtual workstation machines to remote Wyse desktop clients, all within a Dell-claimed "five minutes."

Then there's the critical issue of the application base. None of this matters for CAD unless the applications designers rely on are supported. And that's where NVIDIA's got another critical piece of the puzzle in place, with the company announcing ISV certifications for Autodesk's AutoCAD and Revit, Siemens NX, and ESRI, with PTC (Creo, we assume) promised soon.

Why such a fuss from NVIDIA, OEMs, ISVs, and enterprises about virtual workstation technologies? Ultimately, it's all about making big project databases available quickly, securely, and round-the-clock to team members, wherever they happen to be. Doing so has gotten especially difficult as CAD model and database sizes have exploded, making it challenging to ship copies across networks, especially across a wide-area network (WAN) to remote offices, clients, partners, or contractors.

Consider some of the bigger CAD-oriented enterprises currently in the process of either implementing virtual workstations or building proof-of-concept (POC) installations. Trying to extend its CAD workflow to India, Switzerland-based Asea Brown Boveri (ABB) wanted to avoid the 2.5-hour delay incurred transferring some of its largest datasets over the network. Ditto for Ford, managing satellite offices in Mexico from headquarters in Dearborn, Michigan. At GTC, a Ford IT specialist discussing the motivation behind the company's virtual workstation POC told of an instance where staff in Mexico would wait seven hours or more to download a file from Dearborn, only to spend just a minute or two viewing it in order to sign off on a change.

Clearly, neither of these anecdotes (which I'm sure many readers could relate to and probably expand upon) connote the kind of efficiency every modern CAD enterprise is looking for. And it's that inefficiency that many are looking to remedy with virtual workstations — leaving data in one place, where it is centrally accessible to anyone, anytime, securely and with high-performance, high-fidelity graphics. How good a remedy is it? For those skeptical as to whether the performance of a remotely hosted workstation can match that of a deskside machine (and the author had been one), check out NVIDIA's online trial at www.NVIDIA.com/vmware-trygrid. CAD users and IT pros can kick the tires with access to GRID vGPU technology on VMware vSphere 6 with Horizon, running applications such as AutoCAD, SolidWorks, and ArcGIS Pro.

NVIDIA coffers have historically been filled by two business groups: gaming GPUs and workstation GPUs. With the PC platform stalling and Wall Street issuing its usual demands to expand, the company is wisely looking to other markets in which to grow, including cars and handheld mobile devices. But NVIDIA knows that not only will professional graphic solutions remain a core revenue stream for the foreseeable future, it also understands that the world-class GPU technology these new ventures demand doesn't appear out of thin air. It's developed and funded on the back of its core gaming and professional businesses.

So no matter what NVIDIA gets into, don't expect it to ever turn its back on CAD. Once again, its GPU Technology Conference reflected that posture, with the company showcasing products and technologies that serve the needs of CAD today, while seeding opportunities for both the company and its customers to benefit from new computing approaches coming into view. From pushing the envelope in conventional GPU products with the Quadro M6000, to promoting the virtues of PBR, to paving the way for virtual workstations to address critical and mounting computing challenges — NVIDIA looks to remain a loyal and innovative supplier to its core professional markets.