The annual event showcases technologies poised to extend the GPU’s reach, with the potential to disrupt CAD workflows.


Since its inception eight years ago, NVIDIA’s annual GPU Technology Conference (GTC) has always revealed plenty about what's coming down the road to benefit applications relying on high-performance 3D graphics. Back in 2009, GTC focused nearly exclusively on 3D graphics, addressing the ways in which new GPU (graphics processing unit) technology and products would improve the speed, quality, and impact of visualization for CAD, among other demanding uses.

In the years since, however, we’ve seen GTC’s focus change dramatically to reflect the evolving and expanding use of GPUs across a range of industries. Under the vision of CEO Jensen Huang, the company has embraced opportunities for its GPU technology in high-performance computing (HPC), supercomputing, car infotainment and autonomous driving, robotics, and most recently, machine learning and artificial intelligence (AI). Each spring, NVIDIA uses GTC to promote those applications, as well as the products and technologies it’s creating to serve them.

This year’s convention was no different, with NVIDIA divulging new technology to better serve its rapidly expanding horizons. But while its focus may have widened to explore technologies well beyond core graphics, the technology’s potential value to CAD hasn’t diminished. If anything, it’s likely increased in value, as the company’s attention to applications in AI and HPC in particular is poised to significantly impact the way CAD-dependent designers, engineers, and architects get their work done.

No, it’s not an auto showroom; this is what the entrance to a GPU technology conference looks like when car infotainment and autonomous driving applications are hot topics.

We knew it was coming, and for the most part what we now know about NVIDIA’s latest GPU, Volta, generally fits the mold of what a next-generation chip should achieve over its predecessor. However, everything about Volta is not exactly as expected: It packs a novel new twist that reflects the evolving uses of GPUs in the industry, some of which play right into the needs of CAD professionals. More on that twist ahead, but let’s focus first on Volta’s impact for the GPU’s most common use today: graphics.

NVIDIA’s pattern of late has been to make the first incarnation of a new chip generation the biggest and costliest, intended for HPC markets. For Volta, that flagship chip is the GV100, numbered similarly to its Pascal-generation predecessor, the GP100. Users looking to exploit Volta technology to boost visualization speeds for their current CAD workflows, however, will probably have to wait until later this year and 2018, when the company ships derivative GPU products bearing the Quadro and GeForce brands that NVIDIA markets to PC and workstation markets. While those products will most likely be trimmed-down versions (in transistors, cost, and functionality), they most certainly will bear a good chunk of the GV100’s DNA.

The GV100 makes a jump to a new, denser semiconductor process that increases the transistor count to drive up performance by populating more processing cores and supporting resources (such as on-chip cache, functional units, and bandwidth). But the NVIDIA team didn’t just add transistors based on how many more became available through that new process. No, they went all out and stuffed as many on the chip as they could — an incredible 21 billion transistors — resulting in a die that literally couldn’t get any bigger, bumping up against the foundry’s physical manufacturing limit. 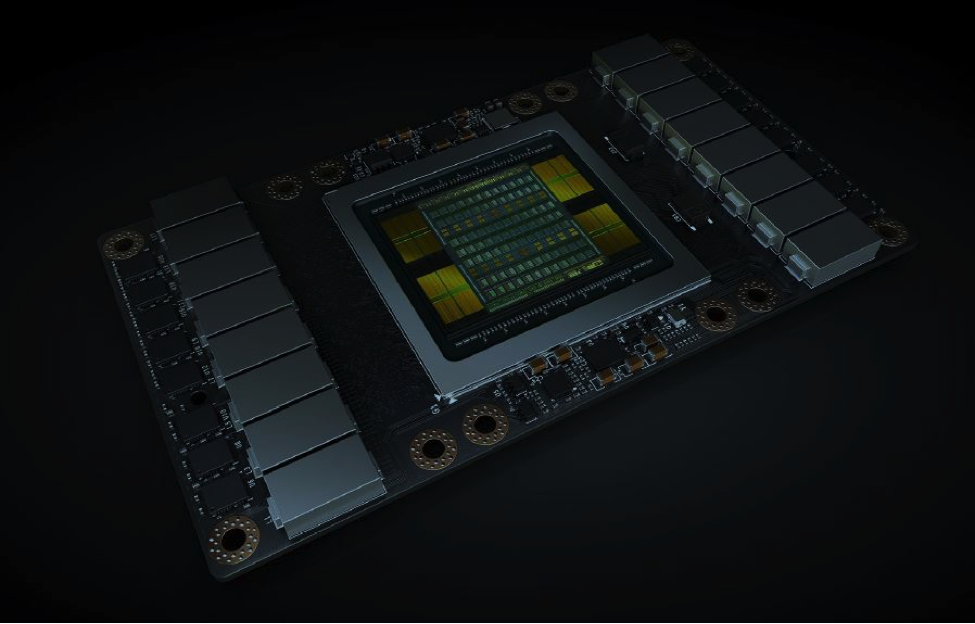 The first Volta GPU: the GV100 chip and module. Image courtesy of NVIDIA.