The annual event showcases technologies poised to extend the GPU’s reach, with the potential to disrupt CAD workflows.


VR/AR leverages existing 3D graphics technologies to deliver new usage models and added value to business reliant on high-performance, complex visualization. The same goes for virtual GPU and workstation technologies, which are providing the linchpin for businesses to move their staffs’ physical deskside machines into datacenters, virtually hosted on remote servers. More businesses and IT professionals are seeing data centralization and workstation virtualization as the most effective solution to tackling challenges in security, big data, collaboration, and geographically distributed workers, while still delivering the interactive 3D graphics experience that professionals demand.

Consider CannonDesign, an architectural design firm with 16 offices spread across the globe, along with countless partners, contractors, and consultants. The company’s workflow, like those of many architectural outfits, relies heavily on Autodesk Revit. That workflow has been straining under the intense pressure of ballooning file sizes that make frequent downloads increasingly time consuming and error prone — problems that are exacerbated by an increasingly dispersed workforce. Effective collaboration, which is absolutely vital to the business, became increasingly difficult to sustain. Deploying virtual workstations across its sites, and dynamically allocating such machines for remote third parties, CannonDesign is alleviating that pressure. Big datasets stay in one place, eliminating costly downloads and uploads while easing pesky version control issues. 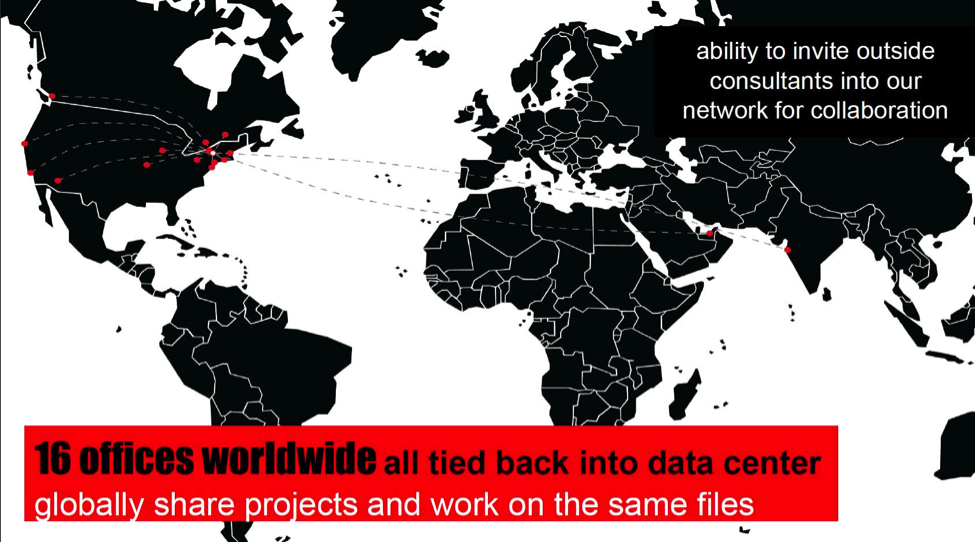 CannonDesign’s staff is scattered across the globe, but they need a way to work on the same data files. Image courtesy of CannonDesign.

Honda is leveraging an NVIDIA GPU-accelerated virtual workstation environment to address nagging IT issues in automotive design workflows that are similar to those CannonDesign faces in its architecture workflows. Honda Automotive’s engineering workstations, running key applications including SOLIDWORKS and CATIA, have always been the lifeblood of its IT environment. In the past those workstations were physical deskside and laptop machines, but some of those machines are now moving to the datacenter in virtual form. For Honda, switching from the desk to the datacenter improves issues in security, collaboration, and sharing large data sets, whether staff is located in a design center in Japan or the U.S. Designers can update models and reviewers can sign off, without the overhead of big file transfers or risking out-of-date models due to multiple copies littered across the network.

Though Honda's use of GPU-enabled virtual workstation environments may be nascent, it’s gone beyond trials and proof of concept and is now moving headlong into deployment. The company now plans to replace around 10,000 physical workstations with virtual workstations in the coming years, making GPU-accelerated virtual desktop infrastructure (VDI) the rule rather than the exception. And Honda is far from the only big automaker heading down this path — we’ve seen similar interest, testing, and planning from virtually every one of Honda’s peers.