Visualization and analysis platform for workstation users has been redesigned with new GPU architecture.


Yesterday, at the SIGGRAPH 2012 computer graphics conference, NVIDIA launched the second generation of its Maximus workstation platform, which enables users to perform analysis and visualization tasks simultaneously. The new Maximus accomplishes this by assigning computing work to either the Quadro K5000 GPU (graphics processing unit), which handles graphics functions, or the Tesla K20 GPU computing accelerator, which performs the number-crunching required for computational fluid dynamics calculations, ray-traced rendering, and other compute-intensive tasks. Incoming work is automatically sent to the appropriate processor for each job.

David Watters, senior director of NVIDIA's business in the manufacturing and design industries, told Cadalyst that the Maximus is designed to reverse the current trend of moving heavy-duty computing away from the desktop. "Over the last couple of decades, the problems have gotten much bigger and more complex ... while at the same time, [computing] performance didn't keep up," Watters said. "That gap resulted in a lot of that heavy lifting being moved into the server room." As the burden on centralized resources grows, however, users are wasting more time in queues, waiting for the cores needed to complete their renderings or other projects.

Watters believes that they're ready for a change — and that Maximus provides it. "[With Maximus,] I don't have to click 'Render' and go have lunch ... I don't have to put it on a render server." But customers aren't just banging out a job more quickly and moving on to the next. Instead, they're using that freed-up time to refine and improve their designs, said Watters. "If you have the time, you can start to remove material from your design, or use a lighter-weight material, to improve energy efficiency."

Another benefit is the ability to create visualizations and run analyses much earlier in the design process, so they can shape a design as it's being developed, instead of just informing revisions after the design is completed. "On a traditional workstation, you had to design first, then simulate when you were finished," said Watters. He pointed to Maximus customer RTT USA, which creates 3D visualizations and runs CFD (computational fluid dynamics) analyses on automotive designs. "If they can know up front what's going to happen to the air flow [over the vehicle] when a change is made to the design ... they can make better styling decisions up front."

The second-generation Maximus comprises two new NVIDIA GPUs (the Quadro K5000 and Tesla K20), both of which are based on the new Kepler architecture. "The architecure is a completely new design from the ground up," said Watters. According to NVIDIA, professionals working in manufacturing and design can benefit from the Kepler-based Maximus by obtaining better realism during interactive design. "It's about allowing materials to look and behave how they really would ... allowing physics to behave as they really would also," said Watters. He used ray-tracing with global illumination as an example: "I want light to bounce around as it would in real life — I want to see that realistically." Watters noted that decisions about fit and finish can differ dramatically when users see very accurate representations of materials, instead of the "pastel clown colors" that design programs often use to approximate real materials.

The NVIDIA Quadro K5000 GPU is a direct replacement for the Quadro 5000. It consumes the same amount of power as its predecessor or less, said Watters, while providing 35% more graphics performance. The Quadro K5000 features: 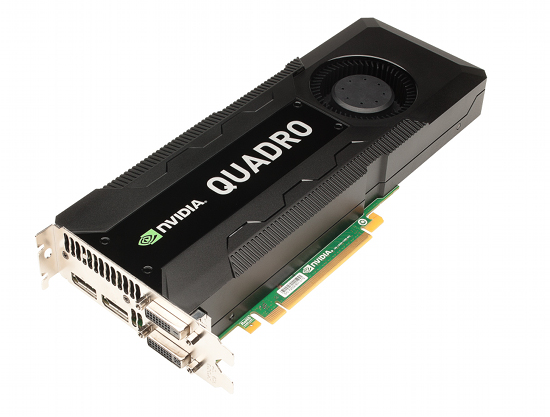 The NVIDIA Quadro K5000 GPU, which makes up part of the second-generation Maximus platform, can run up to four displays at once. Image courtesy of NVIDIA.


The NVIDIA Tesla K20 GPU represents "a huge jump in the computational performance of the GPU," said Watters, tripling the amount of floating-point computing performed. Features include: 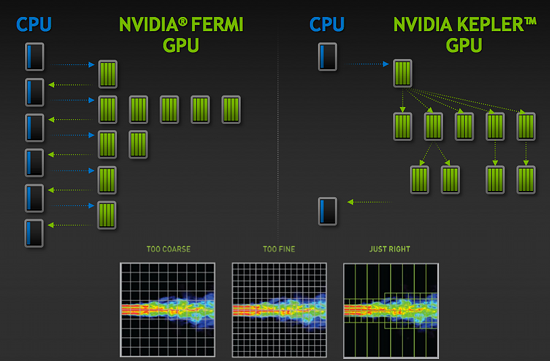 With dynamic parallelism enabled by the Kepler architecture, the GPU can assign resources to the computing workload more efficiently, spawning new threads on its own as needed. Image courtesy of NVIDIA.


BOXX, Dell, Fujitsu, HP, Lenovo, and Supermicro all plan to release workstations powered by the second-generation Maximus. Machines that incorporate both the Quadro K5000 ($2,249) and the Tesla K20 ($3,199) will become available beginning in December; the Quadro K5000 will also become available as a discrete desktop GPU in October. "In the past year, [Maximus technology has] built strong momentum ... it's now become a standard part of the workstation ecosystem," said Watters.