NVIDIA this week launched a range of low- to high-end NVIDIA Quadro professional graphics products that it describes as offering unprecedented workstation performance and capabilities for users of CAD and other professional, graphics- and compute-intensive applications.

Based on the company’s Kepler GPU (graphics processing unit) architecture, the new models include the following: 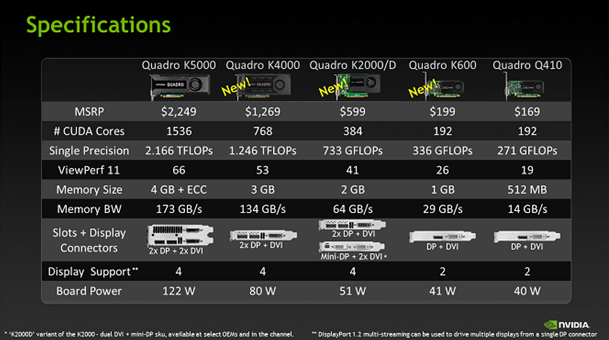 Features of the new models include the following, according to the company:

“NVIDIA Quadro with Kepler architecture offers no-compromise workflow acceleration for customers with exacting computing and graphics demands,” said Gupte. “Kepler offers a future-safe GPU solution, whether professionals are integrating more realism and physics into their manufacturing designs or dealing with the complex demands of 4K workflows in broadcast and film.”

Support for Manufacturing and Building Workflows

Data compiled by NVIDIA shows the application performance of the latest Quadro GPUs.

Product designers today want to tap the full capabilities of software applications as they design, Gupte said — such as incorporating real-world physical analysis and materials into the design process. They want to design “with full reality on; that’s the holy grail,” he said. For example, using previous generations of technology, SolidWorks users typically have to design without RealView or FSA enabled or need a very high-end card to design with those features turned on. However, Gupte said, with the new generation of Quadro cards, users can design with those features enabled. A second trend today, Gupte added, is users running more than one demanding application in tandem, requiring increased graphics and compute processing power. The new-generation cards support that working scenario as well, he said. 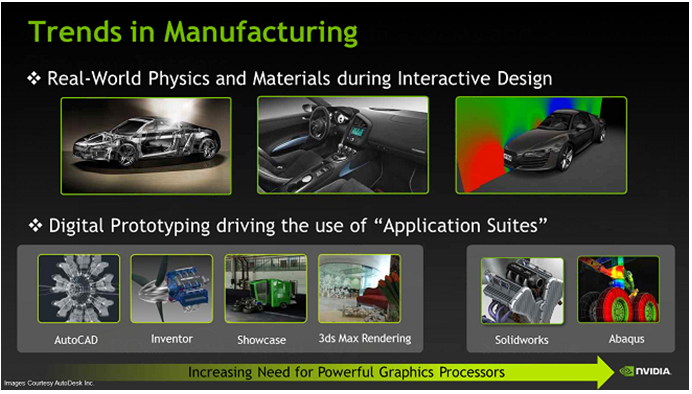 Design trends in the manufacturing field are calling for increased graphics processing power, as shown on this slide from NVIDIA. 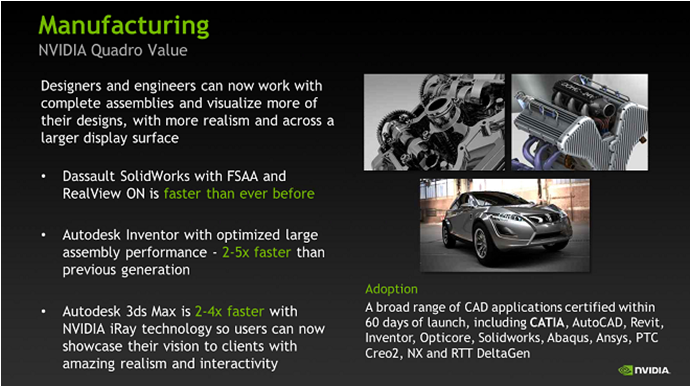 Nick Schoeps, senior engineer at MotoCzysz, an engineering firm that designs, builds, and races custom electric motorcycles, said, “With NVIDIA Kepler GPUs, we can create fully ray-trace rendered images of a bike before we actually build it. Previously we’d rely only on still renders or low-fidelity motion during design reviews. With Quadro Kepler, we can work with highest quality settings always on. That’s a huge advantage and something we hadn’t been able to do before. ”

The new NVIDIA Quadro GPUs are available immediately. More than 150 vendors of CAD and other leading software currently certify and support Quadro-powered workstations, according to NVIDIA. Such systems will be available from HP, Dell, Lenovo, Fujitsu, BOXX Technologies, and Supermicro.