Cadalyst Labs Review: New 'ultrahigh-end' graphics card is so fast that it should pay for itself quickly.

Based on NVIDIA's new Fermi architecture and part of the new group of professional graphics cards that the company classifies as "ultrahigh-end," the Quadro 5000 graphics card introduced today succeeds the company's speedy and deservedly popular Quadro FX 4800. In addition to dropping the "FX" designation, the Quadro 5000 differs from its predecessor in a number of ways.

The NVIDIA Quadro 5000 is a double-width graphics card. Measuring 4.376" wide x 9.75" long, it requires a single PCI Express 2.0 x 16 slot but occupies the space of two slots. It has one dual-link DVI-I connector, two DisplayPort connectors, and a single stereo connector. Maximum power consumption is 152 W. I have heard of heating problems associated with the Fermi architecture cards, but none were evident during the course of my tests, indicating that the active thermal solution for the Quadro 5000 is effective.

The NVIDIA Quadro 5000 is among the first of the Quadro line that is based on the company's new Fermi architecture. It boasts 2.5 GB of onboard GDDR5 memory.

You'll find 352 CUDA cores in the Quadro 5000, a 320-bit memory interface, and 2.5 GB of GDDR5 memory — a full gigabyte more than the Quadro FX 4800. Memory bandwidth is rated at 120 GB per second. Optional components for the Quadro 5000 are 3D Vision Pro glasses, a GSync module, and an HD-SDI capture/output connector.

The Quadro 5000 supports 30-bit color displays such as the HP DreamColor monitors that display more than a billion simultaneous colors. It also supports OpenGL 4, Shader Model 5.0, and DirectX 11. You'll also find support for Error Correcting Code (ECC) that can be enabled with fast double precision. The Quadro 5000 can process 920 million triangles per second — more than three times the 300 million processed by the Quadro FX 4800.

Driver support is provided for 32- and 64-bit versions of Microsoft Windows 7, Windows Vista, Windows XP, and Linux (full OpenGL implementation with NVIDIA and ARB extensions), as well as Solaris. Performance drivers are available for AutoCAD, and in early August an accelerated driver for Autodesk 3ds Max is expected to be available for download. NVIDIA also has a robust support organization that provides fast help if any problems arise.

I tested the Quadro 5000 using the latest version of the Cadalyst C2011 benchmark running on the 64-bit version of AutoCAD 2011 under Windows 7 Ultimate, and with SPECviewperf 11, the latest revision of this industry-standard benchmark. The system used for all testing had a single Intel Core 2 Duo E8400 3.2-GHz processor with 4 GB of RAM; NVIDIA drivers v8.17.12.5863 (dated June 21, 2010) were used throughout.

For the initial tests with AutoCAD, I ran v5.3b of the Cadalyst C2011 benchmark with the native AutoCAD drivers and chose the best score for publication. This iteration of the test produced a C2011 total index score of 317, a 3D graphics index of 661, a 2D graphics index of 264, a disk index of 123, and a CPU index of 220. The benchmark was completed with a single loop time of 21 minutes. Although this performance score was respectable, things got interesting when I switched to the NVIDIA AutoCAD performance driver v18.1.4 (dated May 21, 2010).

When I began the first iteration of the C2011 benchmark using the NVIDIA AutoCAD performance driver, it was obvious that I was going to see remarkably good performance. When completed, the best run of C2011 with the Quadro 5000 graphics card produced a C2011 total index score of 1,182 — the highest Cadalyst benchmark score I've seen to date. Other test results include a 3D graphics index of 4,123, a 2D graphics index of 260, a disk index of 122, and CPU index of 221. The test was completed in 16 minutes, which was 5 minutes faster than tests using the standard AutoCAD drivers. This performance increase is truly significant. 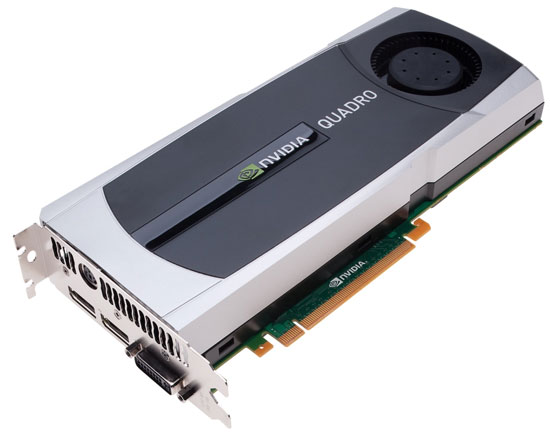 The NVIDIA Quadro 5000 is among the first of the Quadro line that is based on the company's new Fermi architecture. It boasts 2.5 GB of onboard GDDR5 memory.

If you compare these results with other test results, note that you can compare SPECviewperf 11 scores with SPECviewperf 10 scores to get a general sense of performance, but the new tests are more complex than those of the older version, so scores cannot be compared directly.

The NVIDIA Quadro 5000 is covered by a three-year limited warranty and has a retail price of $2,249. If you purchase this card as part of a new workstation, a vendor is often able to offer a lower price than if you had purchased the card separately.

The NVIDIA Quadro 5000 is a high-end graphics card that offers stellar performance; a broad range of certifications for major CAD, engineering, and graphics applications; and expandability through SLI, stereo, GSync capabilities, and forthcoming 3D Vision Pro Stereo Glasses. These features and the increased productivity they support make this graphics card one to covet. Although it carries a significant price tag, one only need look at the performance figures to see that when put in capable hands, the Quadro 5000 will pay for itself in relatively short order. Highly Recommended.