As discussed in detail in a previous three-part Herrera on Hardware series, virtualized workstations are coming to the forefront in professional computing, presenting a compelling alternative to traditional deskside models. Virtual, server-hosted workstations offer solutions to many of the thorniest problems facing IT departments, including flexible access, security, and big data management.

Remote workstation technology, both physically hosted and virtually hosted, has played a minor role in graphics-intensive computing spaces. But to cross over as a mainstream solution that can both broadly serve, and appeal to, professional segments such as CAD demands one linchpin in particular: virtual GPU (vGPU) technology embedded in graphics processing unit (GPU) hardware. vGPU technology provides a level of performance, reliability, and compatibility that previous hosted, shared-graphics approaches could not.

These less-effective technologies include the pass-through GPU approach (also known as the dedicated approach), which can provide high performance and superior application compatibility and reliability, but by definition does not scale across users. Moreover, pass-through GPU in essence doesn't share physical GPU resources at all. Conversely, software-based GPU sharing can share resources across users, but has suffered from deficiencies in both performance and application compatibility. 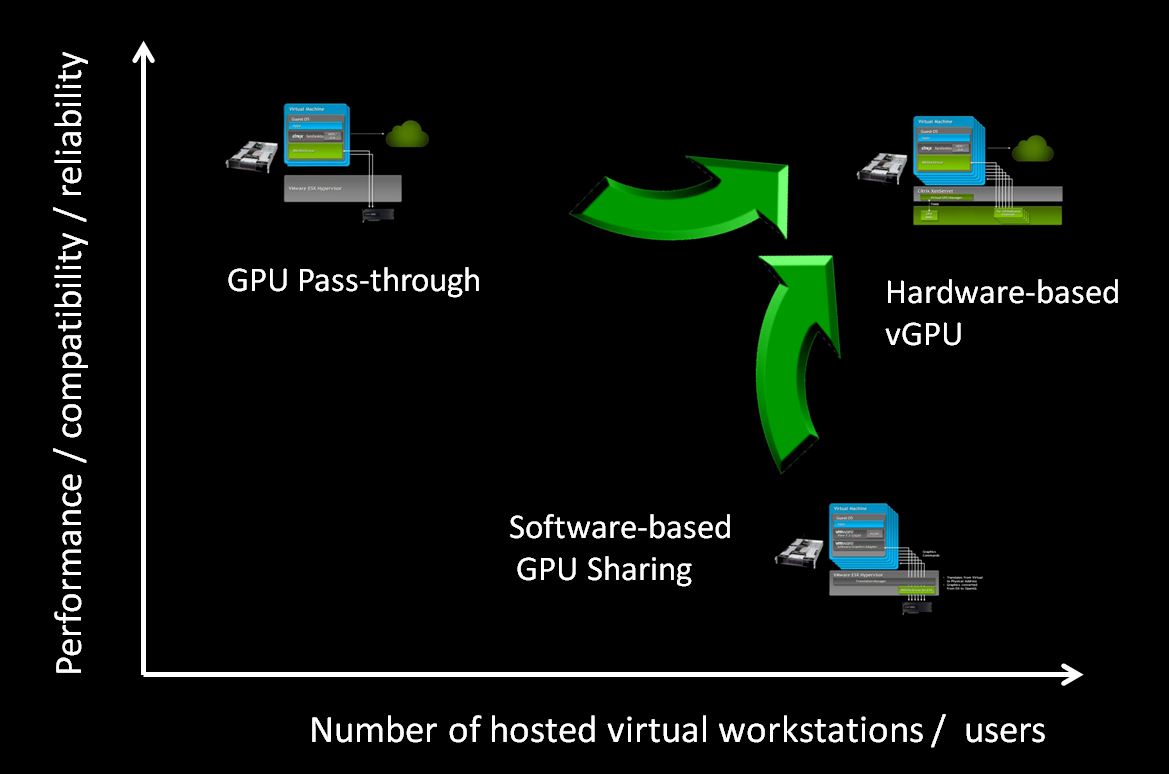 vGPU technology promises the best of previous solutions: performance and compatibility that can scale with users. Graph incorporates images courtesy of Nvidia.


Hardware-based vGPU technology, in contrast, allows a GPU to be shared across multiple CAD clients, for example, with maximum performance and reliability. Nvidia was the first to provide the technology, with its GRID vGPU supported in the virtual desktop infrastructure (VDI) solutions of both Citrix and VMware.

But Nvidia won't be the only vGPU game in town much longer. Both Intel and AMD have jumped on the bandwagon this month, announcing their own takes on virtual GPU technology. It’s no coincidence that Nvidia pitched new enhancements to its existing GRID vGPU technology at the same time. In the process, these events have conspired to further spur momentum in a computing technology that CAD IT professionals are well-advised to keep an eye on.

Under development for at least four years (and probably more behind the scenes), Nvidia's GRID technology gets the lion's share of credit for being first to establish datacenter-based graphical computing as a viable, compelling, mainstream alternative to the status quo in workstation computing. And in September, with GRID 2.0, the company announced the first major revision of the technology.

Specifically, the company has added two new GRID-capable add-in cards, the Tesla M60 and Tesla M6, built off Nvidia's most recent Maxwell GPU generation. The M60 is a top-end, dual-slot PCI Express card that doubles the amount of local memory (16 GB) and adds about a third more processing cores than the previous best-in-class GRID K2 card. Nvidia claims the combination can either double the application performance per user or double the user count at the same performance level. Accordingly, the GRID 2.0 solution supports that hardware advancement by doubling the amount of simultaneous users possible in a workstation-hosting server to 128.

As a modular card (in Nvidia's own MXM standard) operating in a reduced power envelope (75 to 100 W), the Tesla M6 expands GRID's playing field to include the large market and installed base of blade servers. Expanding that playing field even further is GRID 2.0's brand-new support for Linux (to go with existing Windows compatibility), as well as its own CUDA general-purpose computation acceleration.